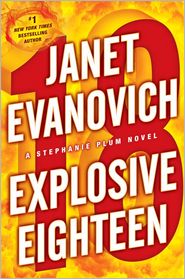 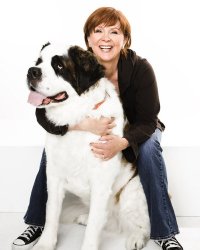 Explosive Eighteen, the next novel in the popular Stephanie Plum series, debuts on bookshelves tomorrow! So in honor of that event, we thought we'd give you a sneak peek and also repost our interview with Janet from earlier this year:


Here's a teaser of EE, courtesy of Amazon:
You know the expression, “blue moon?” Well, for Janet Evanovich's throng of happy fans, 2011 is a “blue moon”—or shall we say a “blue Plum”—year! Double your pleasure, double your Plum—two, two, TWO Plums in one! First Smokin’ Seventeen rocked our socks off, now Explosive Eighteen blows ’em clear out of Trenton!

Evanovich—creator of Stephanie Plum, the Burg's bodacious bounty hunter—picks up the action right where Smokin’ left off, and there are some big surprises right out of the gate. Since neither she nor we want to spoil your fun, you’ll just have to wait till E18 blows onto our shelves!

But if you’re just so excited you’re about to burst, we can tell you this: Stephanie’s old rival, serial home wrecker-slash-gold digger Joyce Barnhardt—yup, She Who Was Caught Cheating with Stephanie's (now ex) Husband—has committed a crime. To top it off, she has Failed to Appear in court…dragging Stephanie kicking and screaming into an international incident! (But that's all chump change compared to what went down in Hawaii!)

Whatever the crime—or the incident (and no, we’re not telling…yet)—you can best believe something’s goin’ BOOM in Stephanie Plum’s most incendiary adventure yet—Explosive Eighteen!
And now, for your reading pleasure: my interview with Janet reposted from June:

R:   Please tell us a little bit about your next Stephanie Plum book! (SMOKIN' SEVENTEEN) What can we expect?
JE:  I can’t say much other than a man from Stephanie’s past comes to town.

R:  Is there anything in particular that you just can't write about?
JE: I can’t write from a male point of view. I have no idea what goes on inside a man’s head.

R:  If you were not a writer, what would you be doing now?
JE: I got a degree in art, so I'd perpetually have paint under my fingernails.

R:  Do you do anything special to celebrate when you finish a novel?
JE:  Take a walk on the beach, eat some birthday cake (even if it's not my birthday) and then get to work on the next book.

R:  Now, the burning question:  Can you tell us your thoughts on the forthcoming Stephanie Plum movie, starring Katherine Heigl?
JE:   I'm looking forward to it.  I understand that Katherine is a fan of the books and she's always wanted to play Stephanie, so it's all good.

R:  And, in closing:  Dog or cat person (careful now J - Meow)
JE:  We've always had pets -- cats, dogs, a hamster or two and a bird.  But sorry, Rocco, though I love you dearly, I'm currently a dog person.  Although my son's cat, Gus, is a frequent visitor.  He has play dates with my dog Ollie.

R:  Thank you for taking time out of your busy schedule to let me interview you, Janet. You’re pretty cool even if you are a dog person.  Meow! J
JE:  You’re welcome, Rocco.  You’re a cool cat,too.

For more info on upcoming events of Janet's, visit her website:

MEOW! SEE YOU WEDNESDAY!  In the meantime, run out and get your copy of EE! NOW!


ROCCO
SCI FI BLOGGINGCAT
Posted by ROCCO LOTEMPIO at 6:44 AM