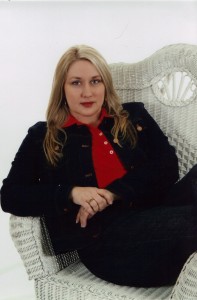 Gayle lives in Southwest Virginia with her husband and two beautiful children, a boy and a girl. She's a full-time writer/editor/mom/wife and chief cook and bottle washer, and she writes a cake decorating cozy mystery series featuring , cake decorator Daphne Martin.

Under the pen name Amanda Lee, Gayle also writes a  cozy mystery series featuring a heroine who owns an embroidery shop. The series is set on the Oregon Coast and features Marcy Singer, a spunky, thirty-something, entrepreneur who is handy with a needle.

Now in my hotseat: Gayle/Amanda!

I’ve always been interested in storytelling, so I think it was only natural that I’d turn to writing.  As a child, I’d enlist the neighborhood kids to help do these improvisational epic sagas. The storylines would sometimes go for days! J

R: Tell us about your two series. You write the embroidery mysteries under Amanda Lee and the Daphne Martin Cake mysteries under your own name, Gayle Trent.  How did you decide to write about two such different careers?

It’s complete serendipity that I write a cake decorating series as well as an embroidery series. I had an idea for the book MURDER TAKES THE CAKE, and I pitched it to my agent at the time, Jacky Sach. She said that cozy mystery readers like to be educated as well as entertained and asked if I had any hobby I could include in the book. I said, “My daughter and I just finished a cake decorating class.” She said, “Go with that.”

The embroidery mystery series was the brainchild of my editor, Jessica Wade. She was looking for someone to do the series, and I was familiar enough with cross-stitch and needlepoint to volunteer. With both cake decorating and embroidery, I know just enough to admire those who are good at their craft!

I had a lot of fun with the embroidery mystery that’s coming out in August, CROSS STITCH BEFORE DYING. The plot centers around movie making, Hollywood, and Bollywood. I also had fun with THREAD ON ARRIVAL, which involved sunken and buried treasures. The research on that one was terrific. I got so involved that it was hard to put the research away and get down to the business of writing.

In my first published book, PHOTO FINISH (now out of print), I killed off a secondary character. I cried over that for two days. I’d have to say that was the least amount of fun I had writing. In fact, I couldn’t continue on with the book until I changed it to where the character was merely wounded. And then, of course, the book took an entirely different direction.

I have a funny story (funnier, in fact, when I tell it in person) about how I got my current agent, Robert Gottlieb. I received an email telling me that Mr. Gottlieb had read MURDER TAKES THE CAKE and was interested in talking with me about representation. I was familiar with some of Mr. Gottlieb's clients, so I thought the email was a hoax. I was outraged that someone would be soliciting clients under his name, so I called Trident Media Group to let them know. It turns out, he really DID want to speak with me.

As for how I felt when I got the call that my first novel had sold, I felt sick. I was so nauseous, I had to run to the bathroom and bathe my face. It was exhilarating, but it was also terrifying that people were now going to be reading my book.

Silence. I don’t know how people who write in crowded coffeehouses or on subways do it. I’d be too distracted by the people around me.

That’s a toughie because I’ve done some pretty crazy stuff. I’d have to say the prize probably goes for calling the FBI and asking what a frozen corpse looks like. They referred me to the morgue…and probably put me on a number of watch lists.

Laughter, entertainment, a little time away from the stresses of their lives….
R: What are you working on at the moment / next?
I’m currently working on the third book in the Myrtle Crumb series. It’s a series I have in Kindle form on Amazon. The books are .99 each, and I put them up so that people could get a taste of my writing to see whether or not they might like my books. The first two have been so popular that I’m working on a third, tentatively titled, MATA HARI KARI.
The first book is BETWEEN A CLUTCH AND A HARD PLACE (http://www.amazon.com/Between-Clutch-Hard-Place-ebook/dp/B008YPI1KE/ref=sr_1_1?s=digital-text&ie=UTF8&qid=1359398546&sr=1-1&keywords=between+a+clutch+and+a+hard+place) and the second is WHEN GOOD BRAS GO BAD (http://www.amazon.com/When-Myrtle-Crumb-Series-ebook/dp/B00AQ4IH96/ref=pd_sim_kstore_1).
R: Are you a plotter or a pantser?
Both. I try to do an overall synopsis of the book so I know where it’s going, and then I try to let the writing direct me. I do plot out individual chapters before I begin them to try to keep myself from going too far afield.
R: What do you do when you’re not writing? Any hobbies or party tricks? :)
I wish I could do party tricks, but unfortunately, I can’t. I do embroider some, and I’m big into reading and watching shows on Netflix. I think writers can learn a lot about pacing from both comedies and dramas.
R: Do you have any advice for beginning writers?

Only to keep at it and never give up. It’s hard work, and people can be both wonderful and hurtful. Believe the good reviews; chuck the bad.

Here is a link to exactly what to expect:
http://blog.nathanbransford.com/2012/08/the-publishing-process-in-gif-form.html

R: What other writing genre would you like to try that you haven’t yet? Historical, screenwriting, etc?

I think I’d like to try screenwriting sometime. I’d love to see one of my stories acted out on stage or screen!

Thanks for a great interview, Gayle! Folks below are all the places you can learn more about Gayle and her books: 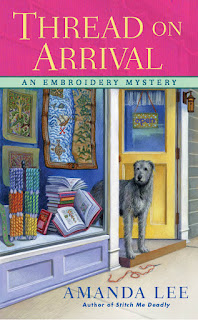 And now...our giveaway!
One signed paperback copy of THREAD ON ARRIVAL is up for grabs; or if you’d prefer, you can get one copy of THREAD ON ARRIVAL (or any of the other embroidery books) for your Kindle or Nook.
Just leave a comment in the section below with the book of your choice and your email addy. The winner will be chosen at random using random.org. Contest closes midnight, March 17!

The winner of our Kari Lee Townsend giveaway is...Nikki!  Watch for an email from the Human to claim your prize! 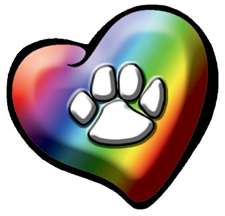 ROCCO
Posted by ROCCO LOTEMPIO at 3:12 AM