A SMASH-ing weekend! Not for fans of this NBC show, Meow! 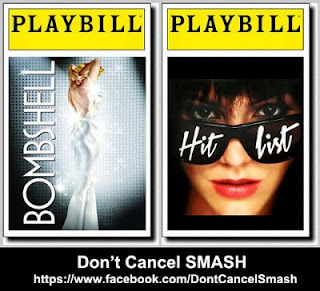 As most folks know, I'm a big Broadway fan (what cool cat isn't?) so i did so look forward to watching SMASH with the human on Monday/Tuesday/Saturday nights (when ever the heck we could find it) and watching talents like Christian Borle (Peter and the Stargazer) Megan Hilty (Wicked, 9 to 5) and Jeremy Jordan (Newsies) belt out tunes, all the way following this drama about the launching of two Broadway musicals.  (I do believe every cast member sang and danced except Anjelica Huston!)  this show is - ahem, was - the cat's meow.

I say was becasue as of May 10,2013, SMASH (along with 15 other shows) became a part of television history - which is a sad shame, really.  It was quality entertainment, easily on par with GLEE, and provided this cool kitty with an hour of great esapism (if you think I dind't imagine myself dancing along with Hilty and McPhee, you're nuts!).  It saddens me that May 26 will be the end of this drama. I do so hope they don't leave too many loose ends, as most shows do when they rush to end a series.  SMASH had TONS of loyal followers, myself and the human included (see sidebar to see just how loyal).

We can only hope that, in the tradition of Cougar Town and Medium, another station will pick up this outstanding show.  C'mon, don't you want to see McPhee, Hilty and Borle sing some more?

For details on saving SMASH, be sure to click HERE
I'm off my soap(litter??)box now. tomorrow back to our regularly schedueld author blogs and interviews.

Posted by ROCCO LOTEMPIO at 4:20 AM