Midnight Louie speaks (and so does his creator, Carole Nelson Douglas!) 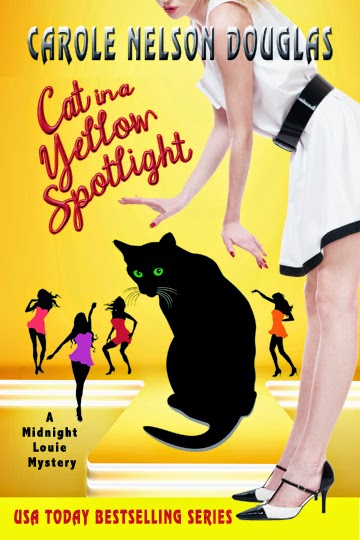 CAROLE NELSON DOUGLAS has been writing about Midnight Louie since 1990.  Louie, a twenty pound plus black tomcat, is the star of his multivolume mystery series, the 26th of which is set for an August release: CAT IN A YELLOW SPOTLIGHT.
Louie and Carole are both here today to talk about their latest release…so without further ado…Midnight Louie and Carole Nelson Douglas!
Thank you, ROCCO!
Seen on the Internet: “Or maybe it's a gender thing: Dogs are boys and cats are girls. Dogs are voiced narrators, marching forth into the world. Cats are pigeonholed in quiet domesticity.”
That writer clearly has succumbed to the truism that “a boy and his dog” trotting off to adventures is the strongest human-animal bond. That writer underestimates the equal and sometimes even superior power of “a girl and her cat.”
That writer has not met Midnight Louie, PI, twenty or so pounds of street-smart cat. Louie is the part-time narrator of thirty novels and the full-time companion and protector of his “girl”, petite PR powerhouse and amateur detective, Miss Temple Barr.
Come Aug. 26, the 26th entry in the Midnight Louie alphabetically titled mystery series, Cat in a Yellow Spotlight, debuts in trade paperback and ebook on bookselling sites everywhere. The cover places Midnight Louie right where one series reader wanted to see him, dead center.
Not that Louie has used up any of his lives, even when this long-running series comes to an end. The 26-letter title alphabet sequence is bracketed by a foundation novel, Cat in an Alphabet Soup, followed by Cat in an Aqua Storm etc.… to 2015’s Cat in a Zebra Zoot Suit and then the closing volume, Cat in an Alphabet Endgame. Naturally, a mere 26 letters is not enough to contain Midnight Louie and his life of crime-solving. Sue Grafton, eat your heart out. Midnight Louie is not hanging up his fedora even then.
Louie is no silent and “quietly domestic” feline. He is Sam Spade with hairballs: an intermittent narrator who’s a hard-boiled, hairy-chested, fully shived, streetwise sleuth with all as his turf. Midnight Louise, his daughter, is a kick-tail chip off the old block. Who better to prowl the mean streets in stealth than the two black cats who make up Midnight Investigations, Inc., and draw on a feral Vegas Cat Pack for backup?
In fact, cats in mystery series by far outnumber canine case-solvers. Although most are not narrators, they are agile cat burglars and clue sniffer-outers. Louie’s four flashing “shivs”, as he calls them, have had many a screaming thug holding his blood-blinded eyes if Louie’s is threatened. Not that she doesn’t have ways of protecting herself.
Together they have encountered and solved a slew of murderers. has an in with coroner “Grizzly” Bahr (no relation). And Louie has busted into the morgue a time or two to satisfy a suspicion about a murder victim. In fact, tough female homicide lieutenant C. R. Molina has even begrudgingly employed the pair on a case. Well, not Louie. He keeps his real role as crime-fighter undercover when the cops are around.
The only flies in his ointment are ’s ex and current boyfriends. Max Kinsella is a magician and undercover agent. When “The Mystifying Max” eased out of the picture so ’s life was not endangered, she became intrigued by a hard-to-get, handsome new neighbor with a surprising secret and a telephone advice job. Matt Devine lives up to his name, as far as is concerned. Louie knows he can’t forever be the main man in ’s life, but he will ensure no mere human will ever put her in danger, even from heartbreak.
In Cat in a Yellow Spotlight, oversees the volatile Las Vegas Strip reunion of a groundbreaking, multi-ethnic rock band, Black & White. Thirty years earlier, tabloids went wild over the shocking disappearance of its two singing divas and flamboyant manager. The women made comebacks, but manager Cale Watson was never seen again. Now, drug trips and murder stalk the rehearsing band members. moves into the celebrity hotel suites to uncover the sabotage, while Louie guards her and sets the Vegas Cat Pack to sniff out clues like, er,  mere dogs. Elsewhere, vengeful former IRA terrorist Kathleen O’Connor forces magician Max Kinsella, into a shocking decision. Deadly encounters and unexpected reunions bring all the main characters unforeseen loss and disclosure, the suspense leavened by the series’ characteristic wit and heart.
So who is Midnight Louie’s collaborator, who is the author who plays “girl” to his “cat”? He forthwith presents Carole Nelson Douglas’s biography:
From being a rare Midwestern finalist in a Vogue college writing contest won by Joan Didion and Jackie Kennedy, to being “first woman” in three positions and garnering 18 daily newspaper reporting awards, to writing sixty novels published by Ballantine, Bantam, S&S, Del Rey and Tor/Forge, Douglas has crossed genres under her own name to build a wide audience. She’s the first author to make a woman from the Holmes Canon a series protagonist. Her Irene Adler bowed to raves in Good Night, Mr. Holmes, a New York Times Notable Book of the Year. She’s had bestselling mystery and high and urban fantasy titles on major lists, including USA Today, and nominations from the Agatha to the Nebula. Her fiction writing awards include RT Booklovers lifetime achievement awards in mystery-suspense, versatility, and as a pioneer of publishing.
But even Louie will let Carole have the last word about why she believes cats make the best detectives.
“When cats bond with people, the connection is more individually wired than with pack-based dogs. Dogs are our children. They must obey. Cats are our equals. We must earn a cat’s trust and love. And then the bond is sealed with Superglue.” 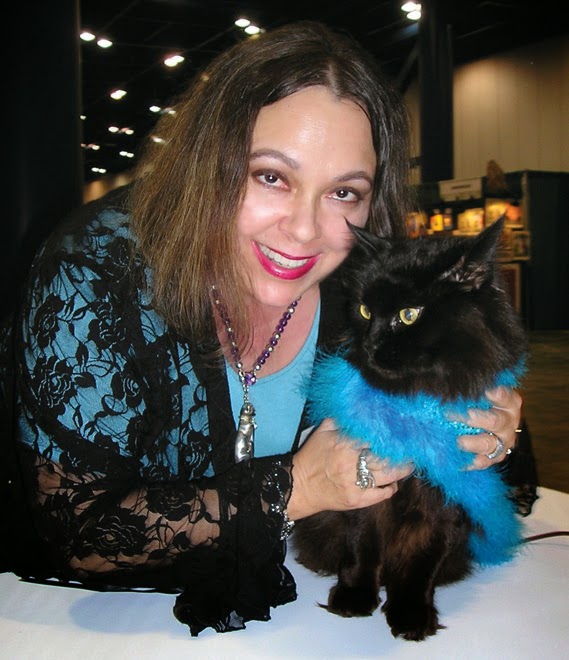 Thanks, Louie and Carole!

We have our own hopes about who Temple finally ends up with...anyone else out there on Team Max, meow???????

We'll be giving away vintage Midnight Louie books to two lucky commenters!
Just leave your email addy with a comment to enter.  For extra entries, you can tweet about this blog, post on FB, friend the Human or Carole on FB!  Winners will be chosen by random.org! Contest closes midnight, July 11!
Posted by ROCCO LOTEMPIO at 3:28 AM