ROCCO gets TC Lotempio in the hotseat!!!!!!! 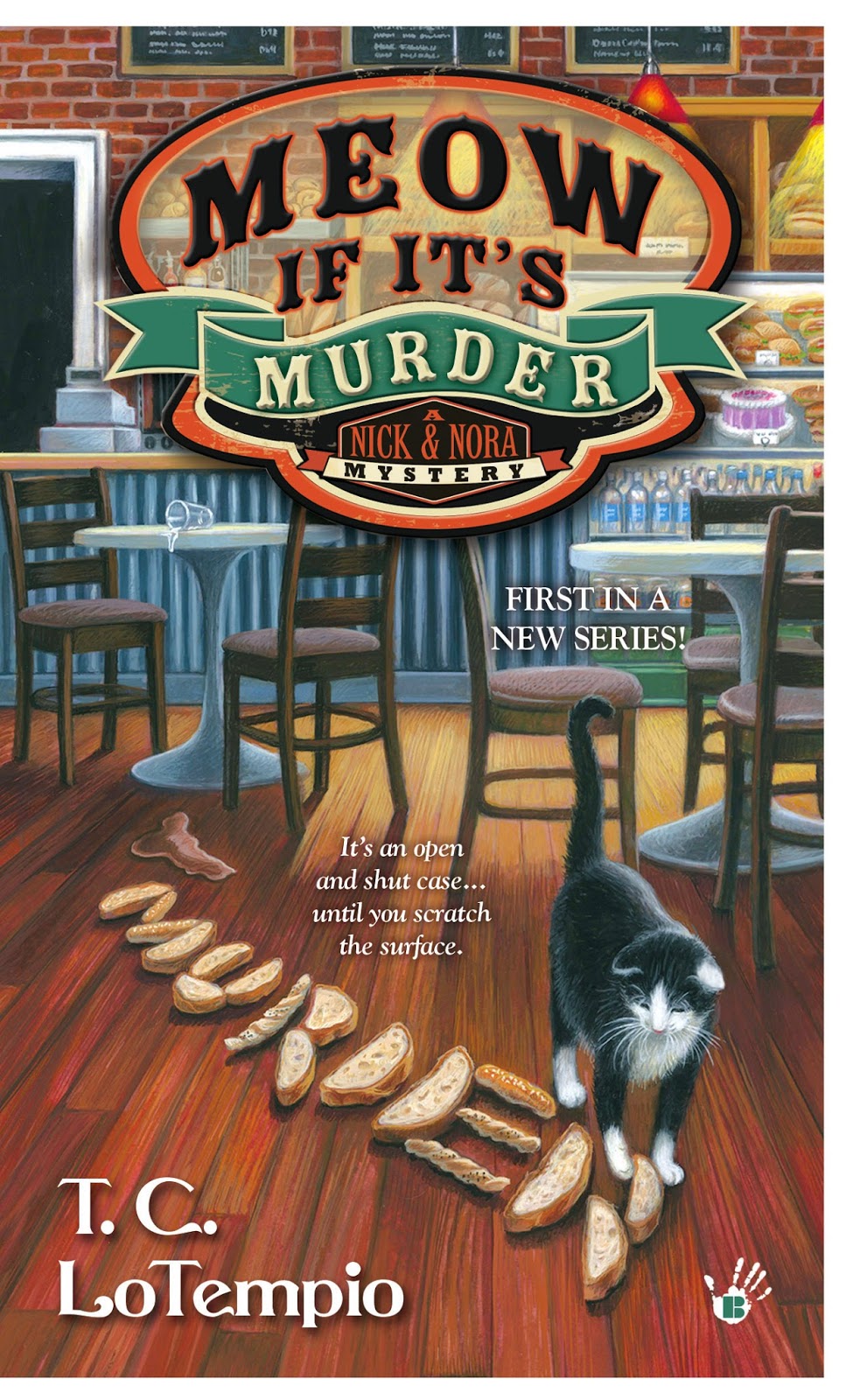 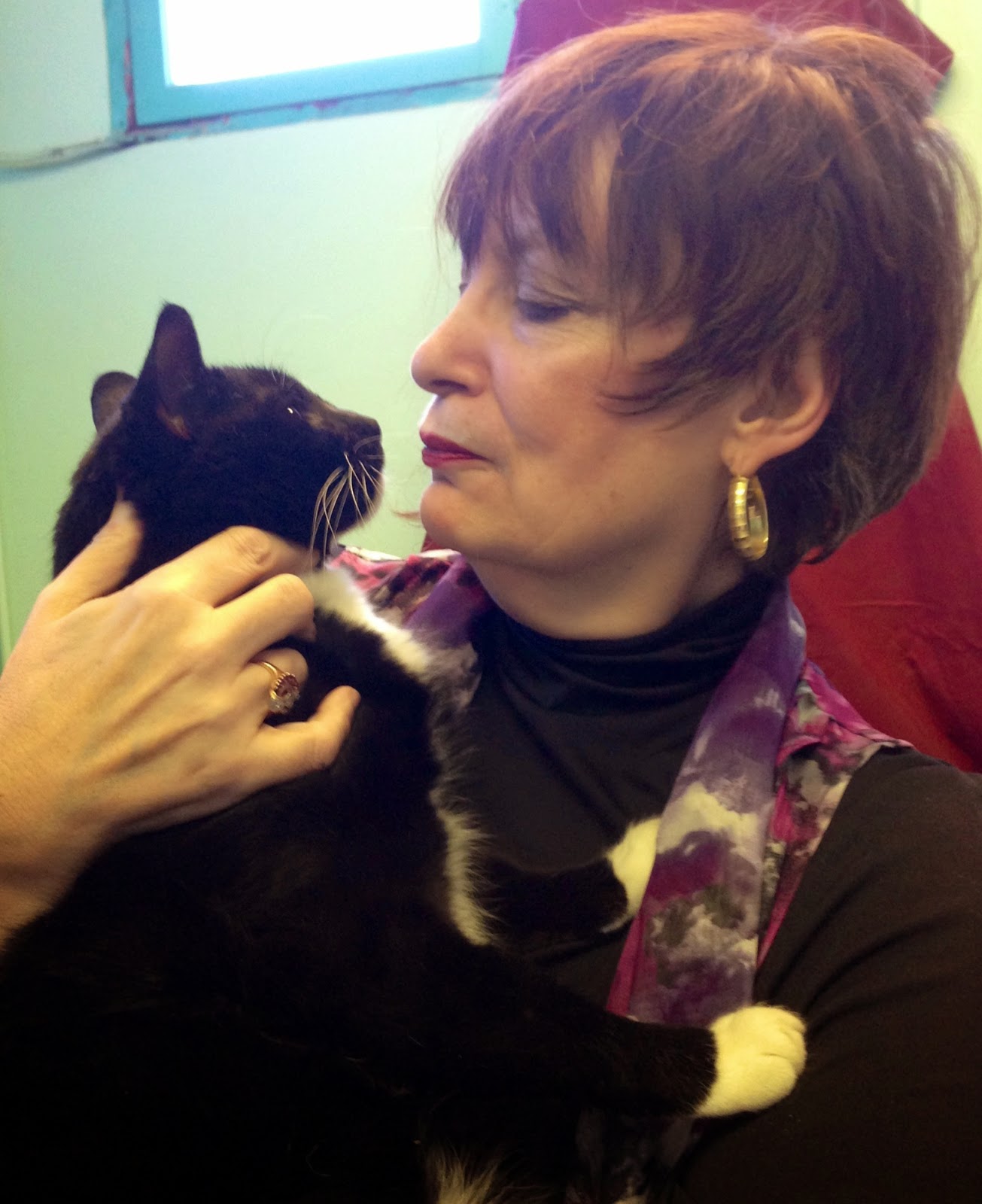 While Toni doesn’t commit murders in real life, she has no problem doing so on paper!  She pens the Nick and Nora mystery series for Penguin, for which ROCCO was the inspiration for the character of Nick!  Toni and ROCCO live in New Jersey, along with three other spoiled rotten cats: Maxx,Trixie and Princess!  When  not writing,Toni and ROCCO are devouring more cozy mysteries to review for Night Owl Digital Magazine! And in their spare time, they fundraise for Kids Need to Read, a charity co-founded by CASTLE star Nathan Fillion.  Catch up with the latest on T.C.’s books on her website, www.tclotempio.com and on ROCCO’s blog, www.catsbooksmorecats.blogspot.com

Rocco: Welcome, Human! Now, for our readers who are unfamiliar with our relationship…you are the one who fills my foodbowl!


Rocco: Meow! Tell us a little about your background – writing wise, that is.


T. C:  I’ve been writing since I was old enough to read.  I loved comic books as a child and I’d sit in my room and make up  my own stories.  I started writing with a serious eye toward publication in 1997, and had some paranormals published by a small press and a few self pubbed via Amazon and B&N before my agent sold MEOW IF ITS MURDER to Penguin in January 2013.


Rocco: Tell us a bit about your latest book


T. C. : Meow if it’s Murder is the first in the Nick and Nora mystery series (Rocco: For which I am the inspiration for Nick, meow!).  Nora Charles, an ex true crime reporter returns to her hometown of Cruz, California to take over her mother’s specialty sandwich shop and ends up investigating a socialite’s “suicide” with the help of a tubby tuxedo cat who turns up on her doorstep!


From the book back cover:


Nora Charles doesn’t believe in fate, even if she is a crime reporter who shares a name with a character from The Thin Man. In fact, she’s moving back to Cruz, California, to have a quieter life. But after finding an online magazine eager for material, and a stray cat named Nick with a talent for detection, Nora’s not just reporting crimes again. She’s uncovering them…

Back in her hometown, Nora reconnects with old friends and makes some new ones, like Nick, the charming feline who seems determined to be her cat. But not everything about Cruz is friendly. Writing for a local online magazine, Nora investigates the curious death of socialite Lola Grainger. Though it was deemed an accident, Nora suspects foul play. And it seems that her cat does too.

Apparently, Nick used to belong to a P.I. who disappeared while investigating Lola Grainger’s death. The coincidence is spooky, but not as spooky as the clues Nick spells out for her with Scrabble letters—clues that lead her down an increasingly dangerous path. Whether fate put her on this case or not, solving it will take all of Nora’s wits, and maybe a few of Nick’s nine lives.

ROCCO: How do you construct your plots? Do you outline or do you write “by the seat of your pants”?


T. C. : Actually, it’s a little of both. I start out with an outline but by the time the book is done, the finished product doesn’t resemble the outline in the least! I always know who I want the murderer to be, but in the end I let the characters take over the story!  I”ve found, though, that I write faster with a more detailed outline so I’m going to try and be good in the future.


ROCCO: Which do you consider more important, plot or character?


T. C. : I don’t believe one is more important than the other.  I believe it’s important to have a good plot and believable, interesting characters.  They go hand in hand.


ROCCO: What is the biggest challenge you’ve faced as a writer and what inspires you and keeps you motivated?


T. C.: Coming up with new adventures for Nick!  I’ve always found plotting out the books a challenge. And you know, ROCCO, you are my inspiration and motiviation. (ROCCO: AWWWW Shucks!)


ROCCO: Do you have an “How I got my agent” story you want to share?


T. C.: By the time I got my current agent, I had been through two,the last of which was a draining experience.  Josh (Getzler) and I just clicked from the first email.  Oddly enough, he didn’t sign me for the book I originally queried him with, and the book we sold was NOT the one he originally subbed.


ROCCO: What are you working on now and what are your future writing plans?


T. C.: More Nick and Nora’s. Book Two will be coming out December 2015.  I have mini-outlines for at least twelve. J  And I’m also working on another cozy series.
ROCCO: Can you give us a hint of what's in store in Book 2?
T.C: Not to give too much away, but...the mystery surrounding Nick Atkins deepens, Nora's sister Lacey finds herself in a real jam, and a person from Nora's past - male - reappears in her life.


ROCCO: What is a typical workday for you and how many hours a day (or week) do you devote to writing?


T. C.: Since I have a day job, the bulk of my writing is done on the weekends. I like to devote at least three hours on Saturday afternoon/evening to it and on Sundays usually between 10-2, longer if I’m nearing the end of a book or I’m on a deadline.  I also try and devote at least two hours each night to it.


ROCCO: What advice do you have to offer to an aspiring author?


T. C: Keep at it.  I was in my late fifties when I sold MEOW to Penguin, so it’s never too late! If it’s meant to be, it will happen.


ROCCO: What’s one thing your readers would be surprised to find out about you?


T.C: That since I first saw it in 1998, I go every year to see PHANTOM OF THE OPERA on Broadway. It’s my very favorite play.


Favorite TV Series?   Present? Castle and the Good Wife and the Following Past: Murder She Wrote


Favorite Movie?    Gone with the Wind


Finish this sentence:  If I could meet anyone in the world, past or present, it would be __Anne Boleyn!


If I could trade places with anyone in the world, it would be _you, ROCCO!   You’ve got the life!


Folks, you can keep up with the Human’s latest doings both here and on her website, www.tclotempio.com


You can purchase Meow if its Murder at Amazon, Barnes and Noble, Books A Million, anywhere books are sold!


The Human will give away your choice of either an e or a hard copy of Meow if its Murder – and a bookmark – to one lucky commenter!  Leave your name and email addy in the comments section below. For extra entries, you can:


Post on FB or your own blog about this interview/giveaway 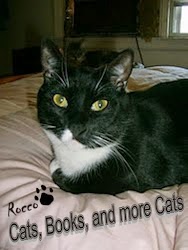