THUMPER IN THE HOUSE!!!


Today my guest poster is Thumper, the cat in Elaine Fabers’ BLACK CAT mystery series!  Thumper wanted to give us some insight into the titles of the series, and he’s such a handsome fellow, how could I say no? 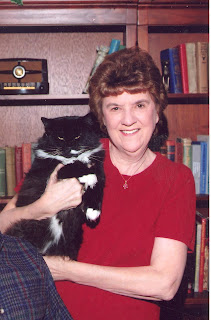 Book titles should give the reader a clue as to what the story is about. It should roll off the tongue, like tuna after breakfast. In Black Cat’s Legacy, generations of Fern Lake black cats waited for someone to return to solve a cold case murder. Some call it instinct, but we know that it’s our ancestors’ ‘memories.’ Certain inciting incidents bring up certain memories, like washing behind your ears. So, when Kimberlee returned to Fern Lake, it was my legacy to help her solve her father’s murder.


In the sequel, Black Cat and the Lethal Lawyer we added ‘alliteration’ to the catchy, informational book title. Isn’t it obvious that the story is about a crooked lawyer? Grrr! And don’t you love the LL? Kimberlee took the family to her grandmother’s Texas horse ranch. This is where I met my soulmate, with eyes the color of mustard and stripes the color of marigolds. It was love at first bite…er sight! Kimberlee learned pretty quickly that the lawyer had embezzled Grandma’s money through a fake children’s charity. Can murder be far behind when she plans to disinherit the charity and leave her money to her granddaughter? I had to face a killer to prevent him from murdering her sorry….self.

Which brings us to Black Cat and the Accidental Angel.


You’re right! Sounds like there is going to be angel! When I woke up in a busted cat carrier and realized I’d been left behind following an MVA, there was a golden striped feline by my side. I had a conk on my noggin and no memory of my name or my former life. She said, “Call me Angel. I’m here to take care of you.” Despite my questions, for some reason, she wouldn’t share any history. Where had we met? Why did she claim to be my bride? She seemed pretty sure of her claim and…and she was as cute as a catnip mouse.

We began a journey to find home. Certain events brought us to John’s Emu ranch and vineyard where he and his daughter, Cindy took us in. In spite of a babbling brook, virgin vineyard, and caring persons to feed us, it was clear, we had landed squawk in a peck of trouble.


John’s ex-wife gave him grief and he was about one giant hairball from foreclosure. His hope was that the sale of his Emu chicks could fend off foreclosure until his vineyard’s first harvest. John had faith and prayed for guidance, and I had a few lessons of my own to learn, dealing with grief, loss, doubt, pride and shame as we encountered a roller coaster of thrills and chills.


So there we were, facing financial disaster and potential homelessness again as increasingly dangerous pranks began to threaten Cindy’s safety.


In spite of my selfish demands to get back on the road and find home, Angel put her nose up and her paw down. She was convinced divine destiny brought us to this place to help John and Cindy. I let her convince me to linger. But, then Angel risked her life to save her loved ones. Was I about to lose the only link to my past and my dearest soul mate?


And the title, Black Cat and the Accidental Angel? Well, Angel has a tale of her own to tell, but I won’t spoil it now. You won’t want to miss the opportunity to hear our story of faith, prayer, sacrifice and love as we tell our truth a different way...through the eyes of a cat.

Elaine Faber lives in Northern California with her husband and four cats. She is a member of Sisters in Crime, Cat Writers Association, and Inspire Christian Writers. She is the author of three cozy cat mysteries. Experience the adventures through Thumper’s eyes as he helps his person solve intrigue, mysteries and mayhem, while staying true to his magnificent self and his soulmate, Angel.


Black Cat and the Lethal Lawyer


Black Cat and the Accidental Angel.


All three novels are available at Amazon.com.


Elaine and Thumper will give one lucky commenter their choice of title in e-book format!


To enter, leave a comment on this blog post with your name and email address (entries without email will be disqualified). Put your choice of book in the comment. For extra entries, you can do any or all of the below: