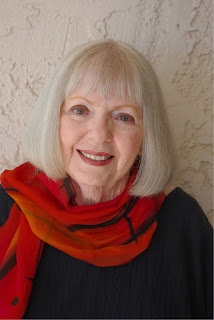 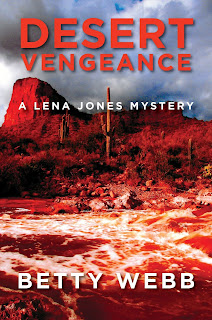 Betty Webb is the author of the nationally best-selling Lena Jones mystery series (DESERT VENGEANCE, DESERT RAGE, DESERT WIVES, DESERT NOIR, DESERT WIND, etc.) and the humorous Gunn Zoo mysteries (THE LLAMA OF DEATH, THE PUFFIN OF DEATH, etc.). Before beginning to write full time, Betty worked as a journalist, interviewing everyone from U.S. presidents, astronauts who walked on the moon, Nobel Prize-winners, and polygamy runaways. She has taught creative writing classes and workshops at the university level, and has been a nationally-syndicated literary critic for more than 20 years, and is currently reviewing for Mystery Scene Magazine. In addition to other organizations, Betty is a member of the National Federation of Press Women, Mystery Writers of America, and Sisters in Crime.


Welcome Betty! Tell us a little about your background.
Thanks ROCCO!  I spent twenty years as a graphic designer in Los Angeles and New York City (on Madison Ave., no less!) but over the years I began doing a little writing for my own entertainment. A poem here, a short story there. Once I moved to Scottsdale AZ, I also started doing some free-lance writing on the arts for local newspapers. As it turned out, my articles became so popular (more importantly, they required almost no editing) the newspaper eventually offered me a full-time job. I stayed with the newspaper for almost 20 years, but halfway through began writing “Desert Noir,” the first Lena Jones mystery. It came out in 2000. Getting up at four a.m. and writing until eight a.m. before going to the paper, I managed to write another four mystery novels before I retired from the paper. I need to add that I had NEVER planned to be a journalist; it was one of those strange things that happen while I was making other plans.

Tell us a bit about your two series, Lena Jones and the Gunn Zoo.  Do you find one more challenging to write than the other?
Those two series are about as different as anything two series can get. The Lena “Desert” books are hard-boiled, and they all reflect human rights abuses, so they can get pretty rough – especially my latest Lena, “Desert Vengeance.” In an earlier book, “Desert Wives,” I went after the polygamy cults here in Arizona, and singled out Warren Jeffs, who is now doing 25 years to life in prison for child rape. The research involved in the PI Lena Jones books are immense, and so they are quite difficult to write. In contrast to those books, the Gunn Zoo books are flat-out cozies, and are a snap to write. My protagonist is Theodora “Teddy” Bentley, a zookeeper. In the Cabot Cove tradition, poor Teddy keeps stumbling over corpses in the beautiful coastal California town where she lives on her houseboat. I am very proud of those books, because in addition to being a barrel of laughs, they also introduce readers to exotic animals they may never have heard of, and discuss how environmental factors are threatening more and more species.
On your website it mentions that you volunteer at the Phoenix Zoo. How did you get involved w/that and do you have any stories to share?
When I first retired from the newspaper I was afraid I’d be bored, so I volunteered for several things. The only thing that “stuck” was my volunteer work in Monkey Village at the Phoenix Zoo. During training for that work, I began to realize I didn’t know as much about animals as I thought I did (I was a horse-and-dog-and-cat-owning farm girl as a kid; still have more pets than are probably good for me!). I fell in love with a pregnant giant anteater from Belize (they’re about the size of a Great Dane, and have four-inch-talons). The more I watched her, the more fascinated I became, and so I finally decided to write a book about her. It was going to be a non-fiction book, but despite my best attempts, it turned into a mystery titled “The Anteater of Death,” in which the anteater – Lucy – is suspected of killing one of the zoo’s big financial beneficiaries. I also created the town of Gunn Landing, which I modeled on the real town of Moss Landing, on Monterey Bay. My husband and I love that town and we vacation there every chance we get. Fun fact about Moss Landing: its population is only 500 (during the week), so it’s a great place to relax and listen to the ocean.

What is the biggest challenge you’ve faced as a writer and what inspires you and keeps you motivated?  My biggest challenge came during the middle of writing “Desert Wives:Polygamy Can Be Murder.” I got up one morning to catch some news while my computer was booting up, and saw the Trade Towers on fire. It was 9/11/2001. I was so distraught I didn’t write another word for two weeks, and even then that I only had the heart to resume writing because I was convinced something had to be done about “Prophet” Warren Jeffs and the child molestation that was going on in his polygamy cult. Many of my writer friends never returned to the books they were working on when 9/11 happened: they just couldn’t pick up where they left off when the world changed.

Do you have an “How I got my agent” story you want to share?
I was lucky. I was a reporter at the time, and was interviewing true crime writer Ann Rule. At the end of the interview, I mentioned that I’d just finished writing my first mystery novel, and she recommended her agent to me. This was in 1999, and I still have that agent.

What are you working on now and what are your future writing plans?
Right now I’m writing “The Otter of Death,” one of my more light-hearted Gunn Zoo mysteries. It’s a lot of fun. After that, I’ll write another Lena Jones book – “Desert Redemption” – which will end that 10-book series (at least, that’s the plan). I already have a new series waiting in the wings, but I’m not prepared to talk about that right now. Let’s just say it’s going to be very, very different than either of my current series.

Plotter or Pantser?
Although I always outline my books, I can never stick to the outline for more than two chapters (sometimes less), so I’m really a pantser.

What advice do you have to offer to an aspiring author?
Write every single day, whether you feel like it or not. If you only want to write when you’re feeling “inspired,” stick to writing haikus, because you’ll never finish a novel.

What’s the craziest thing you’ve ever done?
Backpacked the Highlands of Scotland by myself, because the gal who was originally going to go with me couldn’t “get permission” from her boyfriend.  So I went alone. I had a wonderful time during my two weeks in the Highlands, and it was my first trip out of the country. I saw gorgeous scenery, met interesting people, and stood over Macbeth’s grave on the Isle of Iona (I’m a Shakespeare buff). When I returned to the States, I discovered that my friend’s boyfriend had left her for another woman. Needless to say, that solo excursion taught me a lot about life -- in more ways than one.

What’s one thing your readers would be surprised to find out about you?
I was raised on a farm, and my everyday chores were to milk the goat and collect the eggs from the henhouse.

What question do you wish interviewers would ask? (And what’s the answer?)
I’ve been asked everything you can imagine, from where I get my ideas (I tell them at Costco) to who does my hair (Laurent, in Mesa, Arizona. He’s from Paris, and owns Le Studio).

Where can we learn more about you and your books?  www.bettywebb-mystery.com.

If you entered the witness protection program and had to start over, what job would you want to do?
I’d start painting again (I was a graphic designer before I became a writer, and sometimes I miss it, but there are only so many hours in a day, and now they’re devoted to writing). Then again, if I entered the witness protection program, I might just continue writing, just under a different name.

What is your most annoying habit.
I’m a terrible slob. It’s easy to find me, because I always leave a trail of debris behind – mugs of cold coffee, socks, empty water bottles, half-eaten sandwiches, etc.

What would you love to have a never ending supply of?
Skinny vanilla chai lattes.

Just for Fun:
Night or Day?  Night.
Dog or Cat? (answer carefully). Can’t choose. Have both. Miss my horses, too, but now I live in the city.
Beach or Pool?   Neither. I prefer forests.
Steak or salad?  Steak.
Favorite Drink?  Skinny vanilla chai lattes.
Favorite Book?  “Unless,” by Carol Shields.
Favorite TV Series?  “Vikings” Love me some gore.
Favorite Movie?  “The Brand New Testament” (Magical realism, in French, and  I’ve already seen it twice this week, and will go back to see it again. In short, the plot is about God’s other kid – a girl – and she comes to Earth looking for six new apostles for herself; her brother J.C. told her not to get 12 like he did because things got “complicated.” Very funny, very heart-warming)
Favorite Actor: Tom Hanks
Favorite Actress:  Isabelle Huppert
Dirty Martini or Pina Colada? Ick. I prefer Virgin Bloody Marys
Hawaii or Alaska? Alaska
Finish this sentence:  If I could meet anyone in the world, past or present, it would be the Dalai Lama.
If I had just one wish, it would be that people be nicer to each other.
If I could trade places with anyone in the world, it would be… Nope, I wouldn’t trade places with anyone. We never know what burdens other people are secretly carrying, and those burdens might be much worse than the burdens we are carrying.

Posted by ROCCO LOTEMPIO at 2:47 AM