Ma-Row!  Let's start off September with 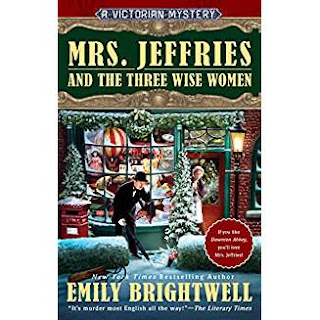 This is the 36th instalment of this popular series!  All I can say is Wow!  Fans of this servants turned detective mystery will eat this up!  There's a holiday theme - a very unpopular man manages to insult every guest at a holiday party, so no one's all that shocked when he's shot to death later that night.  the police deem him a victim of a botched robbery, and everyone goes on their merry way.  But when the robbery remains unsolved and Inspector Witherspoon has to find the killer, he and his entire household go into full Sherlock mode.

Confession: I'm not a fan of Victorian anything, but I did enjoy this book!  and I am sure you will too. Four stars. 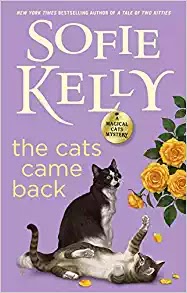 LIbrarian Kathleen Paulson and her cats Hercules and Owen are back for another adventure!  This time out Mayville Heights plays host to a music festival which Kathleen is eager to attend; until she and her cats stumble across another dead body. the victim is a friend, who also happens to resemble a popular cabaret singer performing at the festival? So who was the intended victim?  Kathleen and her cats have thier hands full with this one!  It's always a treat to watch Kathleen piece together clues and also her interaction with her very talented furry friends.  Five Stars.

Christmas is Bailey King’s favorite time of year. For her first Yuletide in Harvest, Ohio, the former big-city chocolatier is recreating a cherished holiday treat: peppermint combined with molten white chocolate. But her sugar high plummets when her former boyfriend walks into the candy shop she now runs with her Amish grandmother. New York celebrity chef Eric Sharp and his TV crew have arrived to film an authentic Amish Christmas. Bailey’s not about to let her beloved town—and Swissmen Sweets—be turned into a sound bite. Unfortunately, she gets more publicity than she bargained for when Eric’s executive producer is found strangled to death—and Eric’s the prime suspect.

With Bailey’s sheriff deputy boyfriend out to prove Eric’s guilt, her bad-boy ex tries to sweet-talk her into helping him clear his name . . . and rekindle their romance to boost ratings for his show. Now, between a surplus of suspects and a victim who wasn’t who she seemed, Bailey’s edging dangerously close to a killer who isn’t looking to bring joy to the world—or to Bailey—this deadly Noel . . .

Another good entry in this charming series by Amanda Flower. Four stars!

All of Cora Chevalier’s dreams are coming true. Since moving to Indigo Gap, North Carolina, the busy crafting maven has been blessed with a great boyfriend, a lovely home, and a booming craft retreat business. But on the eve of her first Crafty Mom’s Escape Weekend, tragedy strikes again in Indigo Gap. This time, it’s curtains for Stan Herald, the disagreeable director of the local theater group, who’s murdered on the opening night of their new production. Worse, Cora’s friend Zee is accused of the crime.

Cora is determined to prove her friend’s innocence, but Zee’s mysterious past is making that difficult. And with a list of suspects longer than a double spool of satin cording, getting a bead on the real culprit won’t be easy. With her friends Jane and Ruby at her side, Cora must string together the clues and solve Stan’s murder before the killer gives an encore performance.

You dont have to be a crafting fan to enjoy this series!  Mollie has interesting characters and a complex plot sure to delight all armchair detectives.  Four stars. 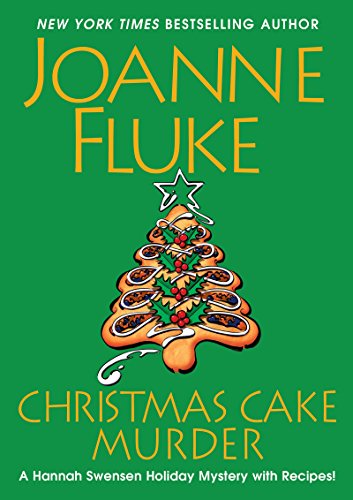 With her dream of opening The Cookie Jar taking shape, Hannah’s life matches the hectic December hustle and bustle in Lake Eden—especially when she agrees to help recreate a spectacular Christmas Ball from the past in honor of Essie Granger, an elderly local in hospice care. But instead of poring over decadent dessert recipes for the merry festivities, she instantly becomes enthralled by Essie’s old notebooks and the tale of a woman escaping danger on the streets of New York. Hannah’s surprised by Essie’s secret talent for penning crime fiction. She’s even more surprised when the story turns real. As Hannah prepares to run a bakery and move out of her mother’s house, it’ll be a true miracle if she can prevent another Yuletide disaster by solving a mystery as dense as a Christmas fruitcake . . .

What can i say about this popular series that hasn't been said already! Hannah and her friends never seem to run out of steam...or recipes!  Joanne Fluke keeps this series going strong, and we can only hope that there might be a few more Hallmark movies in its future as well....... Five stars

When a stack of library materials is found at the scene of a hit and run, library director Lindsey Norris finds herself dragged into the investigation as the police try to link the driver of the stolen car to the person who borrowed the books. Before Lindsey can delve into the library's records, the victim of the hit and run, Theresa Houston, suffers another "accident" and the investigation shifts from driver negligence to attempted homicide.
A clue surfaces in the confiscated library materials that could crack open the case and it is up to Lindsey to piece it all together. But things are not as they seem in the sleepy town of Briar Creek and when the driver of the stolen car turns up dead, Lindsey, her staff and her library friends have to hit the books before the murderer gets the last word...

Another first rate entryin this popular series.  If you haven't tried one of these yet, I encourage you to do so. They are well plotted and the characters are interesting - and who doens't love a librarian as the main character???????  Four stars 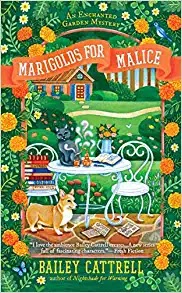 In the third captivating Enchanted Garden Mystery from Bailey Cattrell, Elliana Allbright will need to dig up clues from the past to weed out a killer...Elliana Allbright is happy running her perfume shop, Scents & Nonsense, in the charming town of Poppyville, California. And she's even happier when she can use her inherited abilities to infuse her perfumes with an extra special something that eases woes or solves problems for her customers. But she'll need those abilities and more when murder comes to town.Ellie and her women's business group, the Greenstockings, are helping to open a new museum about local history, and while sorting through the collection of artifacts they discover a time capsule from the days of the Gold Rush. Among the contents is a strange botanical manuscript, recognized by local history professor Eureka Sanford as extremely rare and valuable. When the professor is found dead in the museum, Ellie has no choice but to sniff out the murderer... but this one may have roots that are as old as Poppyville.

Another good entry in this series.  People who like a bit of whimsy with thier cozies will be especially enchanted. Four stars.