This month, we pay tribute to one of ROCCO's idols and my mentor:
MIDNIGHT LOUIE AND CAROLE NELSON DOUGLAS!!!!

Simply put, Midnight Louie is OUR kind of detective. 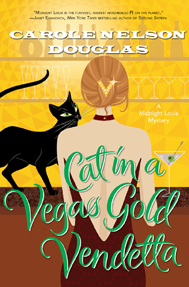 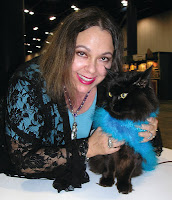 Douglas writes the series as if it were a daytime soap, interweaving plot points and characters throughout.  Like any loyal soap follower, we hung on what would happen next (which we found out, in the last of the "ALPHABET" Midnight Louie mysteries, CAT IN AN ALPHABET ENDGAME.

Now, oh, happy day, Carole Nelson Douglas is re-issuing the earlier Midnight Louie volumes!  Here's hoping that Louie gains a whole new network of fans!  The books can be found at amazon and barnes and noble!

In the coming weeks, we'll take a closer look at Louie and some of his memorable adventures. In the meantime, I leave you with this:

Posted by ROCCO LOTEMPIO at 2:24 PM