Starting off with one of my favorite series 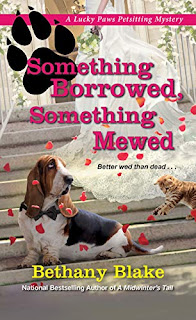 Daphne Templeton’s sister Piper is getting married—and their mother is getting carried away. She insists on hiring Sylvan Creek’s top event planner, Abigail Sinclair, who proposes an Independence Day theme complete with Statue of Liberty-inspired bridesmaid dresses. With all the bickering among the families, Daphne’s glad her only duty right now is pet-sitting for Abby’s cat, Ms. Peebles. But there are some fireworks coming that aren’t part of the ceremony. The Poconos will never be the same . . .

At a tension-filled dress fitting, the abrasive wedding planner is found strangled by a garter—a weapon both borrowed and blue. Now Daphne’s services are required not just for organizing the big day, but for figuring out whether one of the in-laws is an outlaw .

This series has definitley grown on me.  I love the characters, the setting, and Daphe's penchant for getting into trouble.  also love the blossoming romance between Daphne and her detective boyfriend!  Now, all they need is a tuxedo cat!  Five Paws!!! 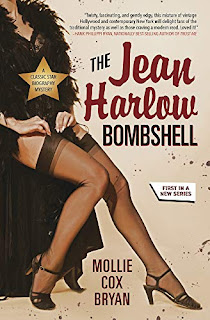 Justine Turner is a world-famous biographer of Hollywood stars. She's also Charlotte Donovan's overbearing boss. So it comes as no surprise to Charlotte when Justine requests an emergency meeting related to her latest in-progress biography. It is a surprise, though, when Justine up and dies before their urgent discussion can begin.
In the wake of such a tragedy, all Charlotte wants to do is finish the Jean Harlow biography that Justine had started. Instead, she finds herself in grave danger—stalked both online and in person by a drop-dead Jean Harlow look-alike. Together with police sergeant Den Brophy, Charlotte uncovers shocking revelations. But will these revelations be enough to catch the killer?

I'm a lover of film bios and msteries, so this was a perfect marriage fo rme!  Definitely worth a read! four and a half stars!!

A DEADLY FEAST
A Key West Food Critic Mystery
Lucy Burdette
May 7, 2019
Crooked Lane
four and a half stars 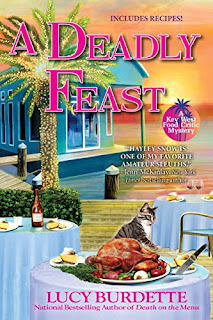 Thanksgiving is nearly here, and Key West food critic Hayley Snow has just one more assignment to put to bed for Key Zest magazine before she gets to celebrate with her family and her police officer fiancé, Nathan Bransford. Then, just days later, wedding bells will ring—if death doesn’t toll first.
The sweet potatoes and stuffing will have to wait when Hayley picks up a distraught phone call from her friend, Analise Smith. On the last stop of a seafood tasting tour run by Analise, one of the customers collapsed—dead. With the police on the verge of shutting down the tour—and ruining Analise’s business—Hayley can hardly refuse her friend’s entreaties to investigate.
As if wedding jitters and family strife weren’t enough for Hayley to worry about, there’s crusty pastry chef Martha Hubbard, whose key lime pie may have been the murder weapon—but did she poison her own pie or was she framed? As the hours to Turkey Day tick away, the pressure cooker is on for Hayley to serve up the culprit on a silver platter in A Deadly Feast, national bestselling author Lucy Burdette’s taste-tempting ninth Key West Food Critic mystery.

Hayley Snow, everyones favorite food critic is back for another adventure.  This is one of hte better series, glad it was given a second life!  four and a half stars. 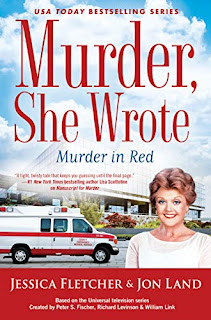 Jessica Fletcher's favorite gin rummy partner, Mimi Van Dorn, checks into the brand-new Clifton Care Partners, a private hospital that's just opened up shop in town, for a simple procedure—one that leads tragically, and inexplicably, to her death. Seeking justice in her inimitable fashion, Jessica decides to pursue her own investigation on the hospital and its shadowy business dealings.
On the trail of what initially appears to be medical malpractice, Jessica digs deeper and learns her friend was actually a victim of something far more sinister. Death is bad for business, but murder is even worse, and Jessica will find plenty of both as she races to bring down Clifton Care Partners before someone else flatlines...

America's favorite sleuth is back for her 49th adventure! This time she's investigating the death of a friend at  a hospital (as if that wasn't scary enough!).  Land has done en excellent job of taking over the series from the late Donald Bain and making it his own.  The suspense has defintiely been ratcheted up over the last few books. Can't wait to see what's in store for number 50!  Jessica fans will not be disappointed.  Five stars.

DYING FOR DEVILS FOOD
Cupcake Bakery Mystery
Jenn McKinley
Berkley
May 8, 2019
four and one half stars 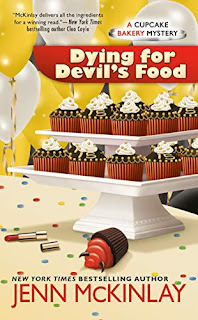 Melanie Cooper has zero interest in catering her fifteen-year high school reunion, but Angie insists it's only right that they bask in the success of Fairy Tale Cupcakes--and Mel's engagement to the delicious Joe DeLaura is the cherry on top!
Everything is going better than expected until Cassidy Havers, resident mean girl and Mel's high school nemesis, picks a fight. No longer willing to put up with Cassidy's bullying, Mel is ready to tell the former homecoming queen to shut her piehole and call it a night. But as Mel and Joe prepare to depart, Cassidy is found dead in the girl's bathroom, next to a note written in lipstick that points right to Mel--making her the prime suspect.
Now, Mel must follow the clues to find the real killer and keep her reputation from being frosted for a crime she didn't commit.

Another tasty entry in this well loved series. Four 1/2 stars. 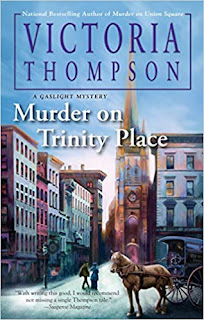 The year of 1899 is drawing to a close. Frank and Sarah Malloy are getting ready to celebrate the New Year at Trinity Church when they notice Mr. Pritchard, a relative of their neighbor's behaving oddly and annoying the other revelers. Frank tries to convince Pritchard to return home with them, but the man refuses and Frank loses him in the crowd. The next morning Sarah and Frank are horrified to learn Pritchard was murdered sometime in the night, his body left on Trinity Place, the side street near the church.
The police aren't too interested in the murder, and the family are concerned that the circumstances of the death will reflect badly on Pritchard's reputation. To protect the family from scandal, Nelson asks Frank to investigate. Frank and Sarah delve into Pritchard's past and realize there may have been a deadly side to the dawning of the new century.

Historicals aren't my cup of tea but this series is a good one!  Victoria Thompson is an excellent storyteller! Four stars.

To enter, leave a comment with your email address in our comments section. Comments with no email address will be disqualified.  US entries only, please.  Contest closes midnight, May 15!  Winner chosen at random using random.org.