Meow Folks, we are back with April's cozy reviews!  Better late than never, guys   After moving safely to Arizona we are glad to announce our return with more reviews!

GONE WITH THE WHISKER
Laurie Cass
A Bookmobile Cat Mystery
Berkley Prime Crime
March 31, 2020
Four and a half stars 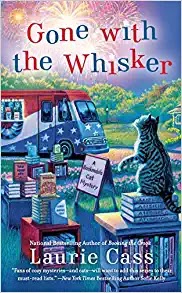 It's the summer season in Chilson, Michigan, and the town is packed with tourists ready for a fabulous Fourth of July fireworks show. Minnie Hamilton and her rescue cat, Eddie, have spent a busy day on the bookmobile, delivering good cheer and great reads to even the library's most far-flung patrons. But Minnie is still up for the nighttime festivities, eager to show off her little town to her visiting niece, Katrina.
But then, during the grand finale of the fireworks display, Katrina discovers a body. Minnie recognizes the victim as one of the bookmobile's most loyal patrons. And she knows she—and Eddie—will have to get to the bottom of this purr-fect crime.

This remains one of our favorite series, primarily because of lovable EDDIE, the bookmobile cat.  :)  Recommended. (Side note:  the covers are designed by Mary Ann Lasher, the same woman who also did the Nick and Nora covers!) 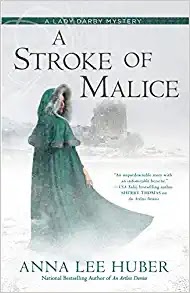 Lady Kiera Darby and her husband Sebastian Gage are looking forward to celebrating with new friends at an exciting yearly soiree, but they soon learn that murder never takes a holiday in the latest riveting installment in this national bestselling series.
January 1832. After enjoying a delightful few weeks with her family, expectant mother Kiera and Sebastian Gage have been invited to the Duchess of Bowmontʼs Twelfth Night party in Traquair, Scotland. Though she normally avoids such fashionable, rambunctious events, Kiera is ready to join in the festive merrymaking. But upon their arrival at the opulent estate, it becomes obvious that all is not merry in their hostess’s home. The family appears to be under a great strain, and someone seems determined to cause mayhem among the guests with a series of forged notes.
Matters swiftly turn from irksome to downright deadly when the partygoers stumble upon a decomposing body in the castleʼs crypt. The corpse is thought to be the duchessʼs son-in-law who had purportedly traveled to Paris more than a month earlier. It is evident the man met with foul play, and Kiera and Gage soon realize that a ruthless murderer walks among them—and may well be a member of the duchessʼs own family. And when the investigation takes a treacherous turn, Kiera discovers just how deep the killer is willing to dig to keep their secrets from ever seeing the light of day.

Good mystery. We give this four paws!!!!! 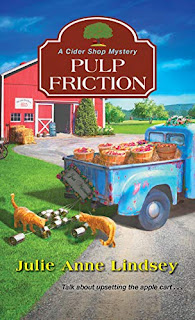 Thanks to Winnie's new cider shop, Smythe Orchards is out of the red and folks can get their fix of the produce and other delectable products they love all year round. The locals are even booking the shop for events, including a June wedding! Winnie couldn’t be happier to see the barn filled to the rafters for the big bash—until her doting ex, Hank, is caught in a heated argument with the groom. Winnie plans to scold Hank after the party, but spots him running off instead. And when the groom turns up dead, apparently hit by the honeymoon getaway car, Hank is the main suspect. Now Hank is on the lam, and it’s up to Winnie to get to the core of the truth—before the real killer puts the squeeze on her . . .

We read the first and found this a highly enjoyable series!  think you will too! 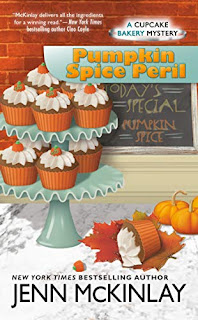 In the twelfth Cupcake Bakery Mystery from New York Times bestselling author Jenn McKinlay, the Fairy Tale Cupcake crew follows the clever crumb trail of a killer who's anything but cookie-cutter.
Life is all sugar and spice for the Fairy Tale Cupcake bakers--Melanie Cooper is engaged to the delectable Joe DeLaura, Angie Harper and her husband Tate are savoring married life, and the bakery is bustling with happy customers. Until one of their most valued cupcake connoisseurs ends up dead.
Local glass artist and cupcake lover Rene Fischer-Klein has always suffered from a wide variety of health issues. In an effort to cheer her up, her doting husband, Peter, brings her a four-pack of her favorite cupcakes every week. But when the police discover that Rene has been poisoned, there's no sugarcoating the fact that the last things she ate were the bakery's signature pumpkin spice cupcakes! With their lives and bakery at stake, it's up to Mel and Angie to find out who poisoned their artist friend and why, before their future is frosted for good.

A good consistent series that delivers a hit every time! 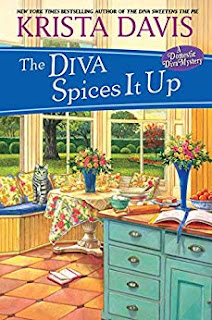 She's a young Martha Stewart...in Old Town Virginia!
New York Times bestselling author Krista Davis delights with the 13th in her enormously popular and completely charming Domestic Diva Mystery series. When a celebrity ghostwriter dies on the job, it's up to Sophie Winston, Old Town, Virginia's favorite entertaining expert and sporadic sleuth, to whip up an impromptu investigation...
Sophie never considered ghostwriting as a side gig, until former actress and aspiring lifestyle guru, Tilly Stratford, trophy wife of Wesley Winthrope, needs someone to write her celebrity cookbook. Sophie agrees, hoping she'll earn enough bread on this assignment to finish her bathroom renovations. But as it turns out, Sophie isn't the first foodie to get a taste for recipe ghostwriting, and if the marginalia are any indication, this project could be a killer...
Wesley claims professional ghostwriter, Abby Bergeron, suddenly abandoned Tilly's cookbook with no warning. But Sophie quickly discovers that Abby may be more ghost than writer now...and her disappearance was no accident. So Sophie cracks open a fresh investigation but sifting the seasoned murderer from this sampling of salty suspects won't be easy. Will Sophie savor another case closed or will the culprit simply melt away?

I was a big fan of this series and was very disappointed when Penguin axed it; fortunately Kensington picked it up!  this is another series that constantly delivers!  Love the antics of Sophie and her posse! Five stars!


WIN ONE OF ROCCO'S REVIEW COPIES!
Leave your name and email address in our comments section.  on April 30 MAXX will choose a winner at random!  US entries only, please!!!!