First up, the next instalment in one of our very favorite series!!!!!!! 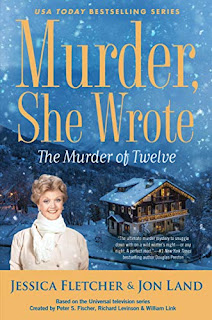 In the latest entry in this USA Today bestselling series, Jessica Fletcher takes on an Agatha Christie-style mystery when she finds herself stranded in a hotel during a blizzard with twelve strangers and a killer in their midst....
Still staying at the Hill House hotel while her beloved home is being rebuilt, Jessica Fletcher finds herself sharing the space for a weekend with a dozen members of a wedding party who have gathered there for a rehearsal dinner. The families of the bride and groom can't stand each other but have agreed to put aside years of long-simmering tension to celebrate the nuptials.
Unfortunately, weather forecasters underestimated the severity of a storm that turns into a historic blizzard that dumps nearly five feet of snow on Cabot Cove, leaving everyone stranded.
But the hotel guests have bigger things to worry about than bad weather conditions and potential cold feet, because a murderer has shown up ininvited--one who has vowed to take them down one by one....

May I just say i love the direction that Land has taken this series in.  Aside from too much bickering between Jessica and Mort, the stories are crisp and well plotted.  This one has a twist even I didnt see coming!!!!!  They're rebooting everything else, why not Murder She Wrote??????  Definite five paw material. 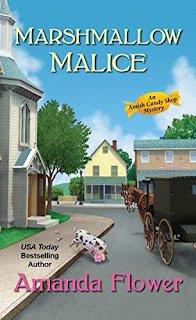 With Juliet Brody and Reverend Brook tying the knot in Ohio’s Amish Country’s most anticipated nuptials of the year, Bailey King is determined to do everything in her power to make the event a sweet success. Except midsummer heat waves and outdoor ceremonies don’t mix, and an exasperated Bailey soon finds herself struggling to fulfill bridesmaid duties and keep her stunning marshmallow-frosted wedding cake from becoming a gooey disaster. Then much to everyone’s shock, the entire ceremony crumbles when a guest drops dead, and the cause isn’t sunstroke . . .

Turns out, the uninvited victim came equipped with lots of dirt on the devout reverend’s hidden past. As Reverend Brook tops the murder suspect list on what should have been the happiest day of his life, Bailey and her sheriff’s deputy boyfriend vow to clear his name. Can the duo boil down a series of baffling clues before Juliet considers her marriage a bad mistake—or the killer whips up another deadly surprise? 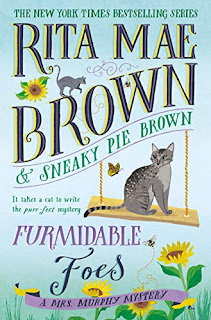 Mary Minor “Harry” Harristeen is on the hunt for a killer with a deadly green thumb when a day in the garden turns fatal in this exciting new mystery from Rita Mae Brown and her feline co-author Sneaky Pie Brown.
Spring arrives in northern Virginia, and as the ground thaws and the peonies begin to bloom a bright magenta, the women of St. Luke’s Lutheran Church prepare for a Homecoming celebration like no other. Harry, Susan Tucker, and their friends are busy planting flowers and trimming hedges to get the church grounds in shape for the big day.
But a note of a menace mars the beautiful spring: The brewery owned by Janice Childs and Mags Nielsen, two members of the gardening committee, gets robbed, with hundreds of dollars in merchandise taken off their delivery trucks in the dead of night. Is this the work of a random thief? Or is something more sinister afoot?
When Jeannie Cordle drops dead at a charity auction, poisoned by a fatal weed, Harry’s worst suspicions are confirmed: a killer lurks in their midst, one with a keen understanding of poisonous plants. Although she can’t yet prove it, Harry knows the murder is related to the thefts at Bottom’s Up Brewery.
With help from her feline sidekicks, Mrs. Murphy and Pewter, as well as Tee Tucker the corgi and sweet puppy Pirate, Harry sets out to find the weed in St. Luke’s garden—and stop a killer before they can strike again.

Another great installment in a tried and true series.  Who doens't love Mrs. Murphy????? 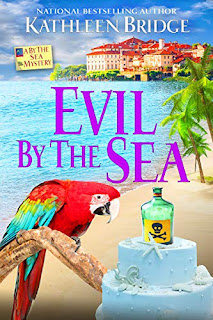 Liz Holt is bewitched, bothered, and bewildered when a wicked killer objects to a wiccan wedding . . .

Island life can get pretty weird. Wiccan weddings, psychic brides, mermaid parades, eccentric parrots . . . Novelist Liz Holt has gotten used to it since moving back to the barrier island of Melbourne Beach, Florida, and once again working in her family's hotel and emporium, the Indialantic by the Sea. But one thing she'll never get used to is murder.

Groom-to-be and leader of the Sunshine Wiccan Society, white warlock Julian Rhodes is poisoned at his rehearsal dinner on the hotel's sightseeing cruiser. His psychic bride, Dorian Starwood, never saw it coming. An old friend of Liz's great-aunt Amelia, the celebrity psychic engages Liz to find out who intended to kill her intended. With her Macaw, Barnacle Bob, squawking "Pop Goes the Weasel" at Dorian's pet ferret, and the streets teeming with mermaids in tails, Liz has got to wade through the weirdness and cast a wide net for the killer—before she's the next one to sleep with the fishes . .

A New to me series.  The Wiccan angle caught my eye (I'm a sucker for a good paranormal).  Enjoyable read.


MURDER WITH CLOTTED CREAM
Karen Rose Smith
Kensington
May 26, 2020
four and a half paws 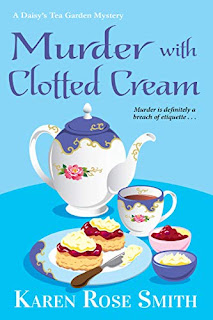 A catering job has come in for Daisy’s Tea Garden in Pennsylvania’s Amish country—but death will be served before dessert . . .

Margaret Vaughn has hired Daisy to provide afternoon tea for her theater group. A local girl who left long ago for an acting career in New York, Margaret has returned home—with a multimillionaire husband in tow. But while Daisy bustles around Margaret’s historic farmhouse, she senses that there’s tension behind the scenes. Then she discovers the hostess on the floor of the pantry—dead and covered with clotted cream.

Barely recovered from her previous sleuthing adventure, Daisy joins forces with the former detective she’s been dating to help solve the case. Should she cast suspicion on the stars of the upcoming play? Can Margaret’s sister shine a spotlight on potential culprits? Or are there clues to be found in the victim’s past? With plenty of family stress of her own to deal with, all Daisy knows is she better act fast . . .

I've read Karen Rose Smith's other series but not this one.  I was pretty confident I'd enjoy it and I wasn't disappointed.  Now I'll have to play catch up with the previous four in this series!!!!!

Leave a comment in our comments section with your name and email address. Winner will be chosen at random using random.org. (or Maxx!!!!!).. US entries only please!  Contest ends midnight May 21.