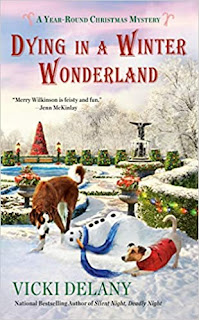 n the town of Rudolph, New York, the Christmas season should make spirits bright, but as the year comes to an end, so does a life, in the fifth installment of this charming cozy mystery series.
Christmas has arrived in Rudolph, New York, and Merry Wilkinson is looking forward to a much needed rest. But before that can happen, Luanne Ireland walks through her door. Luanne had asked Merry to help make decorations for her wedding, but has suddenly moved the wedding months earlier and is now demanding that everyone follow her lead, regardless of the cost.
But that cost is much higher than anyone anticipated. When Luanne's fiancé is found murdered at their proposed wedding venue, Merry resolves to restore peace and calm to the community of Rudolph. But the closer she gets to the killer, the more personal the case becomes, and Merry begins to worry that a death knell could ring in the New Year.

This is one of my favorite series as I love Christmas! that and Halloween are my two favorite holidays.  Vicki Delany is a talented author and every one of her series is enjoyable, this is no exception. Five Paws. 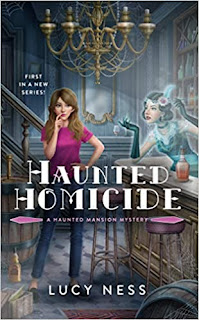 Avery Morgan has been hired to breathe new life into the Portage Path Women's Club, but first she'll have to deal with a dead body and a meddling ghost.
Avery Morgan has had a harrowing first week on the job as manager of the Portage Path Woman's Club. Not only is she in charge of a grand old home with a mountain of maintenance problems and scheduling nightmares--thanks to a recent fire in the Marigold meeting room--but she's also got Muriel Sadler to deal with. Muriel is the current president of the club, the one "nay" vote when the rest of the board voted "aye" to hiring Avery.
After a morning of dealing with another one of Muriel's snits and a meeting with the delicious and delightfully unsettling Ben Harkness, who will be handling renovations in the fire-damaged portions of the house, the last thing Avery needs is for one of the fuses to blow. Again.
She grabs her handy flashlight and heads into the basement, where she stumbles across Muriel's body. She also stumbles across an unexpected helper, Clemmie Bow, the ghost of a young woman who was accidentally killed in the building almost a hundred years ago.
Together Clemmie and Avery are determined to solve Muriel's murder before the killer sends Avery to join Clemmie on the other side.

A good start to what looks to be an interesting new series.  If you like mysteries with a touch of the supernatural, this might be for you!!!!!  Four paws. 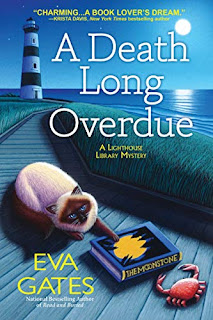 When her former director is found dead in the water, librarian Lucy Richardson will have to get to the bottom of the mystery before the killer ends her tale.
It's summertime in the Outer Banks of North Carolina and Bertie James's college class is having their 40th anniversary reunion. The opening night reception is held at the Lighthouse Library and Lucy and her colleagues have assembled an exhibit of library artifacts showing how libraries have changed over the years. After the reception, some of the women take a walk down the boardwalk to the pier, using flashlights to illuminate the dark path, but what's scarier than the dark is finding the former director of the Lighthouse Library floating lifeless in the water.
Helena Sanchez, the former director, wasn't much loved and spent the party being rude to almost everyone there. As a result, Lucy finds herself in deep water as she rocks the boat, questioning several suspects. But she'll have to batten down the hatches and fast before she's left high and dry...and right in the killer's crosshairs.

Crooked Lane picked up this popular series from Berkley and we are glad they did!  Four paws!!!! 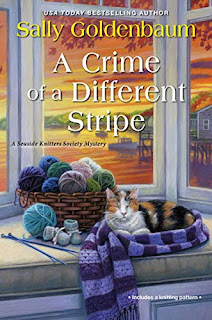 As sleepy Sea Harbor, Massachusetts settles into the glow of autumn, a baby-on-the-way has the Seaside Knitters feeling warm and fuzzy. Only, these crafty ladies can’t get too cozy when sweater weather delivers an unexpected arrival—murder!

While no-nonsense mother-to-be Cass Halloran tries downplaying her pregnancy and her frequent doctor’s visits as an “older” mother-to-be, a softer side of the lobsterwoman emerges as she joins the Seaside Knitters in knitting an abundance of delicate hats and booties. But in contrast to the happy news, terrifying events unfold at the town’s art series that puts a real chill in their New England fall . . .

Izzy Perry’s husband Sam had reservations about inviting his one-time mentor Harrison Grant to speak at the opening reception, although he never imagined the famed and charismatic photographer would rudely embarrass his hosts that evening. But when a dead body turns up along the wooded shoreline the next day, startling secrets come into focus that could undo the tight-knit community of local artists . . .


With a mysterious murder pitting neighbors against each other, Izzy, Birdie, Nell, and a vulnerable Cass find themselves entangled in a dangerous hunt for answers. Can four best friends somehow tie together scattered clues and pacify a list of potential culprits before a cascade of fallen foliage buries the pièce de résistance of a ruthless killer?

Who wouldn't want to read this with that gorgeous cat on the cover?  and the story isn't bad either LOL.  Avid knitters will enjoy the many referneces.
Four paws. 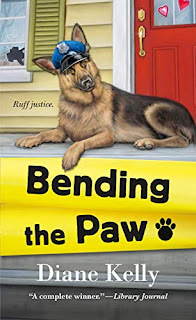 Make way for the long paw of the law as police officer Megan Luz and her K-9 partner Brigit investigate a baffling new mystery in Bending the Paw, by Diane Kelly.
A MURDER WITHOUT A BODY IS LIKE A DOG WITHOUT A BONE
A bloodbath is a shocking new challenge for Megan and Brigit when Detective Audrey Jackson calls them to the scene of what could only be a brutal murder. But the one thing the nightmarish scene is missing is a victim. The frantic homeowner’s husband is gone, seemingly without a trace—and so is the money he was holding. Has a vicious killer committed what might just be the perfect crime?
Meanwhile, it’s hailing cats and dogs all over Fort Worth, and roofing contractors have descended on the city in droves. With plenty of damage and continuing storms, work delays are building up like so much runoff, but Megan is suspicious that one roofer may be a scam artist. Determined to leash every lawbreaker she and her K-9 partner find, Megan is building a case for prosecution, all while Brigit has her nose to the ground for a murderer…

For a mystery starring a dog, it's pretty good. Top notch, actually. This series always delivers!  Four and a half paws.

AND A SPECIAL TREAT
A July release that we forgot to include! 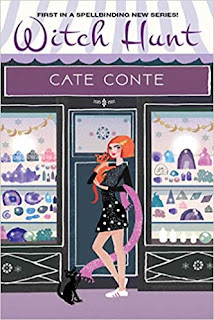 Murder isn’t always crystal-clear . . . especially when the prime suspect discovers she’s a witch. Violet Mooney owns The Full Moon crystal shop in quaint North Harbor, Connecticut. Still grieving her beloved grandmother’s recent unexpected death, she takes comfort in her fat orange cat Monty and her work. Not everyone in town is thrilled with her business, however. When disagreeable town councilwoman Carla Fernandez picks a fight over Violet’s "voodoo shop," the two have a very public confrontation. Of course, when Carla turns up dead, Violet gets little sympathy from the police as suspect #1. But the shock of two policemen showing up at her door pales in comparison to the sudden appearance of her estranged mother Fiona and a surprise sister, Zoe. What Fiona reveals will rock her world and her sense of self—and reawaken her long-dormant mysterious power. Good thing. She’s gonna need it . . .
new mystery series by the writer also known as Liz Mugavero!  I enjoyed Liz's other series and since I am also a fan of the supernatural, liked this one as well!

Win one of ROCCO's review copies!
To enter, leave your name and email address in our comments section. winner will be chosen at random.  US entries only, please.  Contest ends midnight, October 23.