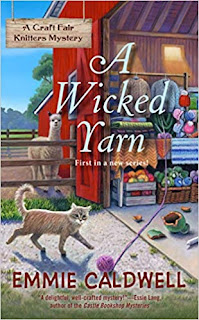 A killer may craft the perfect crime, but as every knitter worth her yarn knows--murder wool out.Mother's Day should be a cinch for the good folks of the Crandalsburg Craft Fair, and knitting enthusiast Lia Geiger has a good feeling about this year's yield. But things quickly get knotty when Lia's daughter announces she's quit her job and Lia finds herself tangled up in the murder of her best friend's ex-husband. While Belinda's alibi quickly gets her off the hook, nasty rumors spread throughout Crandalsburg that shroud the entire fair in suspicion.Could the vendors be responsible for the murder of a man hell-bent on unraveling the fair just days before his death? Lia and her crafty group of Ninth Street Knitters must put down their needles to gather clues and save the crafting community they've grown to love.

A good first entry in what looks to be a promising series.  Also with the requisite cat LOL.

TO FETCH A FELON

four and a half stars 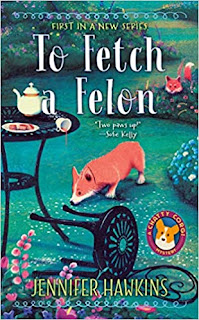 Emma Reed and her beloved Corgi move from London to Cornwall with the dream of opening a tea shop—but first they’ll have to collar a criminal in the first book in a charming new series.

Emma leaves London and her life in high finance behind her and moves to an idyllic village in Cornwall, with its cobblestone streets and twisting byways. She plans to open a village tea shop and bake the recipes handed down to her from her beloved grandmother, and of course there’ll be plenty of space for her talking corgi, Oliver, to explore. Yes...talking. Emma has always been able to understand Oliver, even though no one else can.As soon as Emma arrives in the village she discovers that the curmudgeonly owner of the building she wants to rent for her shop hates dogs and gets off on the wrong foot with Oliver. Although some might turn tail and run, Emma is determined to win her over. But when she delivers some of her homemade scones as a peace offering, she finds the woman dead. Together, Emma and Oliver will need to unleash their detective skills to catch a killer.

another good entry in a new series.  On a separate note, we see that Berkley likes talking animals now, meow!!!!!! 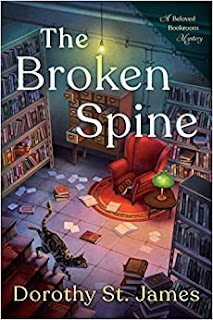 When small-town assistant librarian Tru Beckett sets up a secret book room in her newly modernized library, she discovers that protecting the printed word is harder than she’d ever imagined. In fact, it’s murder.
Trudell Becket, known to her friends as Tru, finds herself in a bind when her library in lovely Cypress, South Carolina, is turned into a state-of-the-art bookless “technological center.” A library with no books breaks Tru’s book-loving heart so she decides to rescue hundreds of beloved tomes slated for the town dump. Under the cover of darkness, Tru, along with her best friends—coffee shop owner Tori Green and mysterious bestselling author Flossie Finnegan-Baker—set up a secret bookroom in the library’s basement and prepare to open it to their most loyal, trustworthy patrons.But as Tru and her crew are putting the finishing touches on their new book room, the town manager, who was behind the big push for the library’s transformation, is crushed by an overturned shelf of DVDs. Tru becomes the prime suspect as she hadn’t hid the fact that she hated having all of those wonderful books replaced by tablets and computers. But if she gives the police her alibi, she’ll have to explain about the secret book room and risk losing the books.Tru knows she’s in a heap of trouble, and it doesn’t help that the officer in charge of the case is her old crush from high school, who broke her teenaged heart. To keep herself out of jail and her beloved bookroom up and running, Tru—with the help of Tori, Flossie, and a brown tabby stray cat named Dewey Decimal—decides to investigate. And faster than you can say “Shhhh!” Tru quickly finds herself on the same page with a killer who would love to write her final chapter. . . .

I found this to be an interesting concept for a series. Sort of reminded me of a secret society!  four 1/2 paws!

CRIME OF THE ANCIENT MARINARA 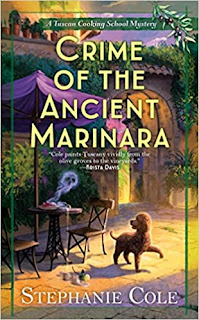 American chef Nell Valenti's high hopes for a successful Tuscan farm-to-table cooking school are in danger of withering on the vine in this delectable cozy mystery.Nell Valenti is settling into her role of transforming the Villa Orlandini into a superb farm-to-table cooking school, and the time has finally come for a full taste test run. But when Chef Orlandini prepares to reveal his top secret marinara recipe for the first time to a group of American gastro-tourists, Nell realizes she might have bitten off more than she can chew.Nell begins to suspect that one of the tourists is actually a private detective sent to spy on her by her overprotective father, and the fussy foodies are noisy and disrespectful from the very start of the Marinara Mysteriosa workshop. Even worse, when one visitor appears to be poisoned by the famous marinara recipe, Nell will have to work fast to uncover a killer and keep a lid on bad press before her fresh start is spoiled for good.

We enjoyed the first one in this series and the second one is a good encore!!!!!!!!! 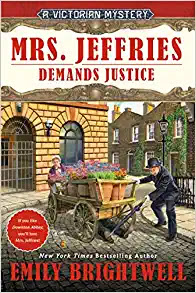 /Mrs. Jeffries always keeps her friends close and now must keep an enemy even closer if she is going to catch a killer. . . .

Inspector Nigel Nivens is not a nice man or a good investigator. In fact, he’s terrible at his job and has always done everything he can to make life difficult for Inspector Witherspoon. But even his powerful family can’t help him after he maliciously tried to hobble Witherspoon’s last homicide investigation. He’s been sent to a particularly difficult precinct in the East End of London as penance.When a paid informant is found shot in an alley, Nivens thinks that if he can crack the case, he’ll redeem himself and have a much-needed chance at impressing his superiors. But there’s one big problem with his plan—Niven’s distinct antique pistol is found at the scene of the crime and even more evidence is uncovered that links the Inspector to the murder.Despite their mutual dislike for Nivens, Mrs. Jeffries and Inspector Witherspoon know the man isn’t a cold-blooded killer. Now they’ll just have to prove it. . . .
Thirty nine books strong!