Meow, it's time for our March cozy reviews!

ROCCO will review HAUNTED HIBISCUS ON HIS MARCH 15TH BLOG! 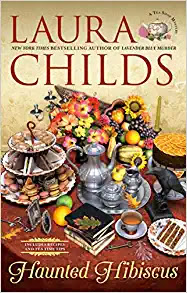 A Game of Cones 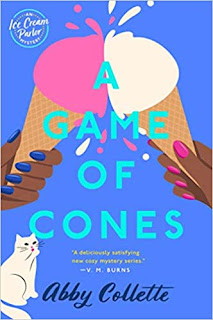 Bronwyn Crewse is delighted that Crewse Creamery, the ice cream shop her family has owned for decades, is restored to its former glory and serving sweet frozen treats to happy customers in the picturesque small town of Chagrin Falls, Ohio. But when a big city developer comes to town intent on building a mall, a killer with a frozen heart takes him out.  After literally stumbling across the body, one of Win’s closest friends becomes the prime suspect, and to make things worse, Win’s aunt has come to town with the intention of taking command of Crewse Creamery. Even though Win has a rocky road ahead to help her friend and keep her ice cream shop, it'll take more than a sprinkle of murder to stop her from solving the crime and saving the day.

Who doens't love ice cream, especially when it's connected to a mystery!!!!  Good second entry in this series! 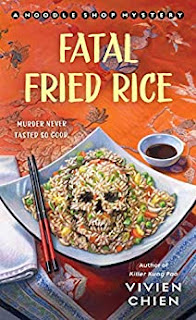 Lana Lee returns for another delectable cozy set in a Chinese restaurant in Cleveland, Ohio in Vivien Chien's Fatal Fried Rice…Lana Lee runs her family’s Chinese restaurant in Cleveland’s Asia Village like nobody’s business. When it comes to actual cooking, however, she’s known to be about a step up from boiling rice. So Lana decides to go to culinary school on the sly—and prove that she has what it takes in the kitchen after all. But when course instructor Margo Chan turns up dead after class, Lana suddenly finds herself on the case, frying pan in hand.Since she was the one who discovered the body, Lana must do double duty in finding the killer and clearing her name. Now, with or without the help of her boyfriend Detective Adam Trudeau, Lana launches her own investigation into Margo’s life and mysterious death. Doing so leads her on a wild goose chase to and from the culinary school—and all the way back to the Ho-Lee noodle shop, where the guilty party may be closer than Lana thinks.

We love this series!  Every time i read one, the descriptions of the food make my mouth water!  And the mystery isn't bad either LOL.  Lana's foray into cooking doens't turn out too well, and as usual she's on the receiving end of a body discovery, much to the dismay of her main squeeze, Detective Adam Trudeau.  Watching Lana chase down clues is part of the fun of reading the book!  A definite five paw page turner!

MURDER AT THE TAFFY SHOP 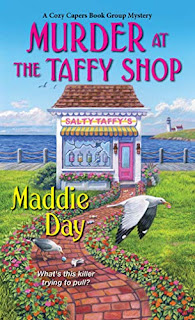 Cape Cod bicycle shop owner Mackenzie “Mac” Almeida and her mystery book club find a certain accusation of murder quite the stretch . . . When your mother is an astrologist and your dad is a minister, you learn to keep an open mind. Which is just what Mac loves to do—exercise her mind by puzzling out fictional clues in the mystery novels she reads and discusses with her Cozy Capers Book Group. But now Mac’s friend Gin has found herself in a sticky situation. After wealthy genealogist Beverly Ruchart is found dead outside Gin’s taffy shop, the candy maker becomes a person of interest. When it’s revealed that Beverly was poisoned the night Gin brought a box of taffy to a dinner party at Beverly’s house, she’s bumped to the top of the suspects list. It’s up to Mac and her Cozy Capers crime solvers to unwrap this real-life mystery. But this time they might have bitten off more than they can chew . . .