Meow, here are my cozy reviews for August!

All cozies here are published by Berkley. 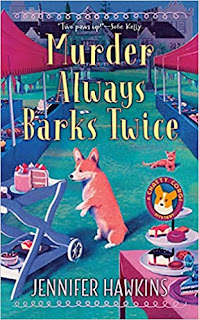 A charming tea room owner and her excitable talking corgi will need to work together to bring a killer to heel in this delightful cozy mystery. For ex-accountant Emma Reed and her beloved corgi, Oliver, opening Reed’s Classic Tea & Cakes in the idyllic village of Trevena in Cornwall has been the fulfillment of a lifelong dream.  Her cakes are popular, she has a host of wonderful new friends, and even a potential new romance.  There’s even time left over for plenty of long country walks with Oliver, who is not only the cutest corgi on record (at least to Emma), he happens to talk (at least to Emma).  What could be better?   How about being asked to help cater the local Daphne DuMaurier literary festival?   But when the festival organizer is found dead and foul play is suspected, Emma, Oliver and their friends are plunged deep into a poisonous mix of village jealousy, family tension, money troubles, and secret love affairs.  Emma quickly realizes it’s up to her and her intrepid corgi to discover a canny killer whose bite is worse than their bark. 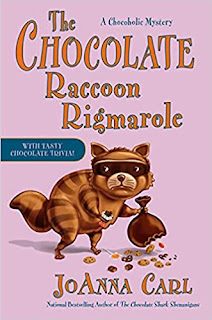 In this eighteenth mystery in the national bestselling Chocoholic series, a gang of crooks with a wicked sweet tooth wreaks havoc on the resort town of Warner Pier, and it's up to Lee Woodyard to rout the hungry rascals.A frantic late-night phone call from her right-hand woman Dolly Jolly brings Lee Woodyard to the scene of a break-in at the Warner Pier jewelry store next door to TenHuis Chocolade. To her shock, the suspect being held at gunpoint by police is Dolly's boyfriend, Mike Westerly, who was recently hired as a night watchman specifically to prevent break-ins. Dolly hopes Lee can help straighten out the crazy misunderstanding. Even crazier? The thieves took nothing of value from the jewelry store, only swiping some snacks. It's another in a series of break-ins by burglars the media has dubbed the Cookie Monsters. They've been hitting shops selling everything from sunglasses to shoes but stealing only sweets: lollipops, cookies, even chewing gum! It all seems pretty funny--until the discovery of a dead body. With her friends and community in danger, Lee must stop one very sour killer before someone else comes to a bitter end.

Another long time series that never seems to run out of steam. Then again, who can resist a mystery featuring chocolate??????  four and a half paws

Dinner and a Murder Mysteries 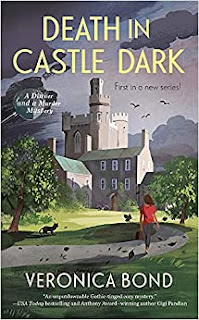 Actress Nora Blake finds her dream job when she is cast in a murder-mystery troupe that performs in an imposing but captivating old castle. When she stumbles upon a real murder, things take a nightmarish turn in this first book in an exciting new series.Maybe it was too good to be true, but when Nora Blake accepted the job from Derek Corby, proprietor of Castle Dark, she could not see any downsides. She would sink her acting chops into the troupe’s intricately staged murder-mystery shows, earn free room and board in the fairy tale–like castle, and make friends with her new roommates, which include some seriously adorable kittens.But something sinister lurks behind the walls of Castle Dark. During Nora’s second performance, one of her castmates plays the part of the victim a little too well. So well, in fact, that no one can revive him. He has been murdered. Not ready to give up her dream gig—or to be the next victim—Nora sets out to see which one of her fellow actors has taken the role of a murderous real-life villain.

I admit, the premise of this series intrigued me.  I've always loved a good mystery dinner theatre. and I'm sufficiently intrigued to see where the author will take the series next.  Four and a half paws!!!!!!!!

An old favorite rounds out this  month's entries from Berkley Prime Crime.....

WHAT THE CAT DRAGGED IN

Cat in the Stacks Mystery 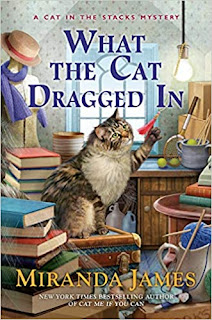 Librarian Charlie Harris and his faithful feline companion, Diesel, have inherited Charlie’s grandfather’s house, along with a deadly legacy: a decades-old crime scene, in this all-new mystery in the New York Times bestselling Cat in the Stacks series.
Charlie has always believed that his grandfather had sold his house to his longtime tenant, Martin Hale. So when Martin dies, Charlie is surprised to discover the house was not left to Martin but instead belongs to Charlie. As he and Diesel check out the house he remembers fondly from his childhood, he is pleasantly surprised that it is in better condition than expected. That is, until they find a literal skeleton in a closet.While the sheriff’s department investigates the mysterious remains, Charlie digs deeper into the past for clues to the identity of the bones and why they are there. But the cold case heats up quickly when Martin’s grandson is found dead on the farm.As Charlie delves into his own family history, he encounters many people who might have been motivated to take a life. But Charlie and Diesel know that things are not always what they seem, and that secrets seemingly lost to time have a way of finding their way back to haunt the present.

We always enjoy the adventures of Charlie and Diesel and this is another series that gets better with age like a fine wine.  And dont' those covers just keep getting cuter!!!!!!!!!  As always, Miranda James crafts a fine mystery, but the real stars are Charlie and Diesel.  Five paws

Want to win one of ROCCO's review copies?  Just leave your  name and email address in our comments section below.  ROCCO and random.org will choose one winner on August 31st!  US entries only, please.

You must leave e-mail address to qualify for the drawing.  Good luck!