Merow, here are my October cozies!

We'll start off with a brief look at a favorite. We'll take a closer look at this one in a separate post next week!

An attack on the host of a fancy tea party sends Theodosia Browning looking for answers in the latest entry in the New York Times bestselling series.Tea maven Theodosia Browning and her tea sommelier, Drayton Conneley, are catering a Victorian Christmas party at a swanky mansion in downtown Charleston. Drucilla Heyward, the hostess, is one of the wealthiest women in town.As the champagne flows and the tea steeps, Drucilla is so pleased with the reception by her partygoers that she reveals her secret plan to Theodosia. The Grande Dame has brought the cream of Charleston society together to reveal that she is planning to give her wealth away to various charitable organizations. However, before she can make the announcement, Theodosia finds her crumpled unconscious in the hallway. It looks like the 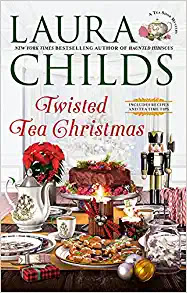 excitement has gotten to the elderly woman--except that there is a syringe sticking out of her neck.

NO MEMES OF ESCAPE 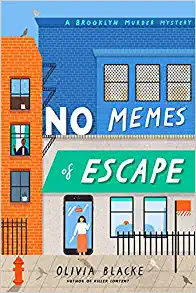 Amateur sleuth Odessa Dean is about to discover the only thing harder than finding her way out of an escape room is finding an affordable apartment in Brooklyn in this sequel to Killer Content.
Odessa Dean has made a home of Brooklyn. She has a fun job waiting tables at Untapped Books & Café and a new friend, Izzy, to explore the city with. When she's invited on a girls' day out escape room adventure, she jumps at the chance. It's all fun and games until the lights come on and they discover one of the girls bludgeoned to death...The only possible suspects are Odessa and the four other players that were locked in the escape room with the victim. She refuses to believe that one of them is responsible for the murder, despite what the clues indicate. In between shifts at the café, Odessa splits her time interviewing the murder suspects, updating the bookstore's social media accounts, and searching for the impossible--an affordable apartment in Brooklyn.But crime--and criminally high rent--waits for no woman. Can Odessa clear her and Izzy’s names before the police decide they're guilty?

A good follow up to the first in the series.  We are curious to see if Odessa finds that apartment!!!!  four paws.

When Parker Valentine decides to take a weekend getaway with her boyfriend Reid, a ski trip seems like the perfect choice. Between hitting the slopes and persuading the resort's wine director to sell her mulled wine, Parker is eager to mix business with pleasure. But her plans are muddled when she finds the resort owner's body on a treacherous portion of ski trail near the resort.As a result, not only is Parker's romantic weekend thrown into chaos, but now that the owner has died, her business deal is due for a frosty reception, and her life might be in danger as well. After a series of unfortunate mishaps befall Parker, she realizes that whoever killed the resort owner might want to tie up loose ends. Parker's going to need all of the investigative skills at her disposal to catch a killer before they put her on ice.

An interesting plot and a spunky heroine. Who could ask for more?  Except maybe more books LOL.  4 1/2 paws.

IN THE COMPANY OF WITCHES 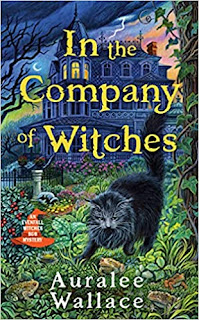 For four hundred years, the Warren witches have used their magic to quietly help the citizens of the sleepy New England town of Evenfall thrive. There's never been a problem they couldn't handle. But then Constance Graves--a local known for being argumentative and demanding--dies while staying at the bed and breakfast Brynn Warren maintains with her aunts. At first, it seems like an accident...but it soon becomes clear that there's something more sinister at work, and Aunt Nora is shaping up to be the prime suspect.There's nothing Brynn wants more than to prove Nora's innocence, and it hurts her to know that even two years ago that might have been easier. Brynn, after all, is a witch of the dead--a witch who can commune with ghosts. Ghosts never remember much about their deaths, but Constance might remember something about her life that would help crack the case. But Brynn hasn't used her powers since her husband died, and isn't even sure she still can. Brynn will just have to hope that her aunts' magic and her own investigative skills will lead her to answers--and maybe back to the gift she once thought herself ready to give up forever.

A good start to what looks like an interesting series. Then again, we've always been a sucker for the supernatural, witches in particular!  Four paws! Georgie is excited for her first Christmas as a married woman in her lovely new home. She suggests to her dashing husband, Darcy, that they have a little house party, but when Darcy receives a letter from his aunt Ermintrude, there is an abrupt change in plans. She has moved to a house on the edge of the Sandringham estate, near the royal family, and wants to invite Darcy and his new bride for Christmas. Aunt Ermintrude hints that the queen would like Georgie nearby. Georgie had not known that Aunt Ermintrude was a former lady-in-waiting and close confidante of her royal highness. The letter is therefore almost a royal request, so Georgie, Darcy, and their Christmas guests: Mummy, Grandad, Fig, and Binky all head to Sandringham.Georgie soon learns that the notorious Mrs. Simpson, mistress to the Prince of Wales, will also be in attendance. It is now crystal clear to Georgie that the Queen expects her to do a bit of spying. There is tension in the air from the get-go, and when Georgie pays a visit to the queen, she learns that there is more to her request than just some simple eavesdropping. There have been a couple of strange accidents at the estate recently. Two gentlemen of the royal household have died in mysterious circumstances and another has been shot by mistake during a hunt. Georgie begins to suspect that a member of the royal family is the real target but her investigation will put her new husband and love of her life, Darcy, in the crosshairs of a killer.

Fans of this long running series will not be disappointed as Georgie puts on her sleuthing cap again!  We admit we are not fond of period mysteries but this one is an exception. Four paws.