Friday saw the passing of one of TVs most iconic, if not THE most iconic villian ever...yes, I mean JR Ewing, portrayed by the wonderful actor, Larry Hagman. 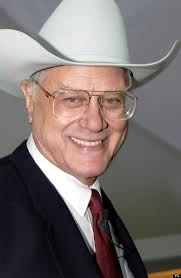 Growing up, I remember being introduced to Larry Hagman on the television show, I DREAM OF JEANNIE.  Who can ever forget his portrayal of Major Anthony Nelson, the astronaut who rescued a genie from a bottle and really never lived to regret it?  I remember looking forward to Saturday nights and the adventures of Major Nelson and Jeannie, which continued for five great years before, drat it, they married them off and the series, like so many others, "jumped the shark" and died once the romantic tension was removed.

But I DREAM OF JEANNIE was only a teaser of greater things to come - the 1978 premiere of the nighttime soap, DALLAS, that spawned many spinoffs and imitators (KNOTS LANDING, DYNASTY, FALCON CREST, to name a few)  But none could compare to the original - DALLAS was the story of an oil family, the Ewings, thier lives and loves - and the main story revolved around the conflict between two brothers - the ever goody-goody Bobby Ewing, and his dastardly brother, JR, portrayed with amplomb by the effervesent Hagman.

JR was definitely the villian everyone loved to hate, and he proved that evil didn't always have to be dark, it could have a funny side too.  Millions tuned in to see who shot him (making it the second most watched episode in history, even to this day) and securing Hagman's place forever in the annals of TV villany.

Just in June, Hagman starred in the "DALLAS" reboot on TNT.  It's a huge loss, and we wonder how the reboot will deal with his death - but one thing is certain. Recast?  Never.

Some people just can't be imitated.  JR Ewing/Larry Hagman is one of them.
RIP, Larry. you've earned it. 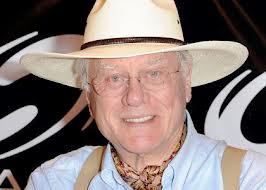 ROCCO
Incredible Blogging Cat
Posted by ROCCO LOTEMPIO at 10:46 AM