We welcome Author Donnette Smith to the Hotseat! 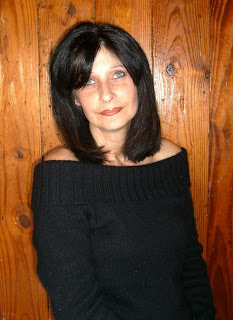 Donnette Smith was born in Jacksonville Florida, but she has lived in the Lone Star State so long she deems herself a true Texan. She has a penchant for writing romantic thriller/suspense novels. Although she considers herself born with the gift to write, it wasn't until she took a job as a newspaper journalist that she realized writing fiction was her true calling in life. She is obsessed with forensic science and crime investigations, which greatly shapes the kind of stories she creates. If someone told her she could no longer write, she would feel the need to become a homicide detective. On second thought, she would probably just write that person into her next crime novel as the murder victim. She spent three years in New Orleans learning all she could about voodoo before writing her latest thriller novel, Cunja. Donnette is the author of Lady Gabriella, a mystery/suspense/romance novel published in 2008. She is also the co-author of The Chosen One, published as part of the Help Preditors and Editors anthology.

D: I have raised 3 children, so back then I was a stay-at-home mom for the most part. But from a young age (12) I have dabbled in writing. I tried my hand at a first novel when I was 19. That same novel didn’t get published until I was in my late 30’s. Between that time, I took a job as a newspaper journalist.  I think it was then I became serious about writing. I had already accomplished the most difficult hurdle for any new writer: I’d completed a book from start to finish. Once you do something like that, you just do it again and again. So to answer your question, I think I was born a writer. I just didn’t blossom into it until later in life.

R: What drew you to the supernatural genre?

D: That’s an interesting question. I don’t know that I am specifically drawn to the supernatural genre in any way. I am most intrigued by forensic science and crime investigations. But during the writing of my latest novel, Cunja…it just turned out with a supernatural element. I can tell you I didn’t start out writing it with that genre in mind. I don’t ever have a genre in mind when I start writing a book. I think up an interesting concept, and then write out a full outline for the story. I am a big fan of subplots. I love using the element of surprise in my stories. If you read one of my books, you will most likely find there will be a mystery to solve. I’m the kind of author who will write a book…then sit back and decide which genre (genres) it fits into.

D: John Grisham would be at the top of the list. He has a way of writing that captures the audience. I think he is the most talented author in existence. Next would be Dean Koontz. I admire the way he gets away with introducing the POV of several different characters in his stories. Most editors will tell you to stick with the POV of 2 or 3 characters only. Otherwise, you risk confusing your readers. But Koontz has always broken this rule…and does it in a completely acceptable way. I envy that man. Lol.

R: Tell us about Cunja.   How extensive research on voodoo did you do for this novel?

D: Cunja is the story of a homicide detective struggling to catch an unusual serial killer. What complicates matters is that the only surviving victim in the case just happens to be a news-reporter who had recently swindled him out of privileged police information for a story she’s covering. He doesn’t trust the attractive reporter as far as he can throw her. It only gets worse when he discovers he is falling in love with her. To crack this case he must unravel the shocking connection between the victim and her pursuer. And…battle the power of an ancient voodoo curse.
Having lived in Louisiana for 3 years, I had all the information I needed about voodoo at my fingertips. The more I studied the religion, the more intrigued I became. When I began writing Cunja, I decided immediately that voodoo was going to be a large part of the story.

D: I only need 2 things: silence and no disturbances. In my busy household, these two things can be hard to come by. Sometimes I will escape to my mom’s house, where things are quiet and I can hide out to get some writing done.

D: This is a no-brainer for me. I would jump at the chance to visit the cowboy era. This period in history has always fascinated me.

D: I love to sing as much as I love to write. I come from a family who loves music. My mother is a songwriter, and my father and her both play guitar. When I met my husband, he was a guitarist for a rock band. We both hosted karaoke shows for 9 years. I think music will always be a very big part of my life.

D: I don’t know about crazy, but I can tell you the stupidest thing I’ve ever done. When I was a teen, I nearly set the whole woods behind my house on fire. I had gotten busted smoking in school. To keep my parents from finding out about it, I decided to burn the pink slip I received for my bad-deed. I took the slip into the woods behind my house, laid it on the ground (on top of dried brush, mind you), and set fire to it. Like an idiot, I only brought a small cup of water with me to put out the flames. When the fire began to get out of control, I ran back to the house for more water. By that time, it was too late. The woods were ablaze. Oh well…I sat on the front porch of my house frantically trying to figure out what to do. Finally, I realized the only solution was to admit to my mother what I had done so she could call the fire department. Boy, did I get a whoopin’. The good news is, the fire department was able to put out the fire before it reached the house.
R: What do you hope readers will most take away from your writing?

D: A good story that completely entertains them. Hey, that’s a big reason why I do what I do.

R: What are you working on at the moment / next?
D: I am working on another thriller novel. Of course it has to do with a murder investigation. The book is in the beginning stages. But I’m really excited about the premise of the story.
R: If you weren’t a writer, what would you be doing?

D: I would either be a forensic scientist or a homicide investigator. I think I’d be very good at solving murders.

Thanks for a great interview, Donnette!
Folks, 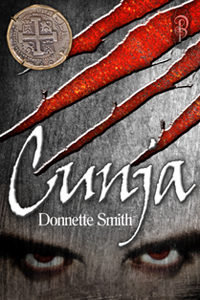 Donnette will be giving away a free digital copy of Cunja to one lucky commenter! To enter, just leave a comment on this blog post with your email address! For extra entries, you can:

Contest closes midnight, December 2, winner chosen by random.org and announced Dec. 3 – open to US and International!

Posted by ROCCO LOTEMPIO at 6:57 AM