Ringing in the New Year with ....Ilona Andrews! 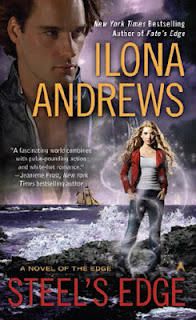 Meow! My guest to ring in 2013 is none other than...Ilona Andrews!
“Ilona Andrews” is the pseudonym for a husband-and-wife writing team. Ilona is a native-born Russian and Gordon is a former communications sergeant in the U.S. Army. Contrary to popular belief, Gordon was never an intelligence officer with a license to kill, and Ilona was never the mysterious Russian spy who seduced him. They met in college, in English Composition 101, where Ilona got a better grade. (Gordon is still sore about that.)


Gordon and Ilona currently reside in Texas with their two children and many dogs and cats. They have co-authored two NYT and USAT bestselling series, the urban fantasy of Kate Daniels and romantic urban fantasy of The Edge and working on the next volumes for both.

R:  How did you become interested in writing? At what point in your life did you realize it was the career for you?


It’s just kind of happened organically.  I never wanted to be a writer.  I just started writing down stories because it made me happy.  My first attempt was when I was fifteen.  It was written in Russian on an ancient typewriter and while it was terrible, working on it made me happy.


R: Tell us about your upcoming release, Steel’s Edge


It’s a story of a woman who is trying very hard to not become a monster and a man who thinks he is one already. They both experience injustice and separately decide to stand up against it.  Here is the official synopsis:


Charlotte de Ney is as noble as they come, a blueblood straight out of the Weird. But even though she possesses rare magical healing abilities, her life has brought her nothing but pain. After her marriage crumbles, she flees to the Edge to build a new home for herself. Until Richard Mar is brought to her for treatment, and Charlotte’s life is turned upside down once again.


Richard is a swordsman without peer, future head of his large and rambunctious Edger clan—and he’s on a clandestine quest to wipe out slavers trafficking humans in the Weird. So when his presence leads his very dangerous enemies to Charlotte, she vows to help Richard destroy them. The slavers’ operation, however, goes deeper than Richard knows, and even working together, Charlotte and Richard may not survive...


Steel’s Edge also happens to be the final book in the Edge series.


R: How different was this series to write than your Kate Daniels one, and do you have a preference?


I enjoyed working on it.  It gave us a really nice break between Kate releases.  I don’t really prefer one storyline over the other – each series came with their unique challenges.  I can tell you that now that the series is over, I’m excited to work on something new.


R:  What is it about the fantasy genre that drew you to it?


I don’t know.  I suppose I always gravitated toward it.  The possibility of magic is just too intriguing to pass up.


R: Which of (your character) adventures was the most fun for you to write? Were any of them the least amount of fun?


I pretty much hate everything we’ve written.  I enjoyed working on Magic Strikes and Bayou Moon the most, I think.  I’m also enjoying the current manuscript, Magic Rises.


I have several soundtracks, which I play in a giant playlist while I write.  I also really like having scented candles or essential oils in a warmer.  Because we work form home, having little rituals signals to my brain that it’s time to work.  It helps me concentrate.


R: If you had access to a time machine, which historical moment would you travel to and why?


I would like to see Moon landing, although I’d need a time machine and a space suit for that.  I think that was such a hopeful time for us as a civilization.  A promise of things to come.


R: What is one thing your readers would be most surprised to know about you?


I’m not sure I have any deep dark secrets.  I like to knit and I’m an avid computer gamer.  I like to watch anime.  That’s about it.


R: What other writing genre would you like to try that you haven’t yet? Historical, screenwriting, etc?


I thought of doing a murder mystery once, but I think it would turn into a paranormal murder mystery.  That’s just the way I’m wired.


Working on Magic Rises, Book 6 in Kate Daniels series.  We also have a free serial going, which is a lot of fun.  Here is a link: http://demo.ilona-andrews.com


I prefer to have some idea of where we’re going.  I think this is essential when writing with a collaborator, because we have to be able to discuss things knowing what they are connecting to and why they must be included.


I came to US with no money.  I had like $60 to my name.  I didn’t speak the language, didn’t know anybody, and had never been in a boarding school before.


R: What do you hope readers will most take away from your writing?


I hope that they will see that despite all of the difficulties, our character stick to their principles.  Honor, integrity, and loyalty – sometimes people say they are outdated words, but I believe they define who we are.


Dog or Cat? (answer carefully)  Dog.  Sorry, but I have yet to find that one perfect cat who will like me enough to cuddle with me without simultaneously demanding food. (R:  Aha, you haven’t met me yet, Meow!)


Favorite Movie?  It changes.  I have several comfort movies which I won’t miss if I stumble on them while flipping channels: 13th Warrior, Star Wars (the old ones), first Indiana Jones, Galaxy Quest…  If I had to pick one, it would be the Emperor’s New Groove.