In the Stacks with....Miranda James! 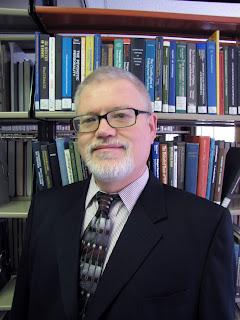 Meow - today I interview Miranda (aka Dean) James, the author of the popular CATS IN THE STACKS mysteries from Berkeley Prime Crime. For those of you not famiilar with this series or author, here's a short bio:


Miranda (aka Dean) James is the New York Times bestselling author of the "Cat in the Stacks" mysteries published by Berkley Prime Crime. The latest in the series, just released, is Out of Circulation. Dean is a medical librarian in the Texas Medical Center in Houston, Texas. A seventh-generation Mississippian, he attended graduate school at Rice University and somehow never left Houston afterwards. He is an avid book collector, reader, and bridge player. He has two cats and way too many books.

R:  Welcome Dean!  Great to have you in the hotseat! Tell us a bit about yourself and how you became interested in writing.

Thanks, Rocco! Well, I grew up on a farm, an only child who loved books and reading. I discovered mysteries when I was about 10 or 11, and I read a Nancy Drew book belonging to one of my cousins. There was no looking back after that; I was hooked on mysteries. I got the writing bug a couple of years later and actually wrote a mystery. The urge to write grew stronger while I was in graduate school, and I just kept at it.

R:  the character of Diesel is so adorable. Did anything in particular inspire him?

When I decided to write a series about a librarian and his cat, I knew right away that I wanted the cat to be a Maine Coon. I had met one in real life, and that cat, named “The Diesel,” inspired my own Diesel. Maine Coons are large, loyal, loving, intelligent, and those characteristics are the basis for Diesel’s character. 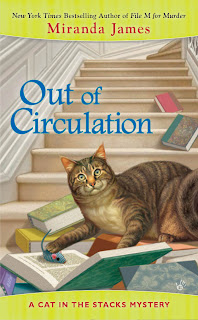 R: Tell us about your latest release, OUT OF CIRCULATION.

It’s the fourth book in the “Cat in the Stacks” series, and the idea for the book came from library fundraisers. Committees generally do the fundraising events, and there are always tensions because everyone has an opinion about how things should be done. Add to that a small town setting where there can be jockeying for social position, and that is the basic plot of this book. The two grande dames of Athena society, Miss An’gel and Miss Dickce Ducote, have long run everything in town, and Vera Cassity, a social climber who was born on the wrong side of the tracks, is forever trying to push them out of the way. My amateur sleuth, Charlie Harris, is a new member on the Friends of the Library board, and he gets caught in the middle during the power struggles.

R:  Do you have a “how I got my agent” story you’d like to share?  How did you feel when you got the call your first novel had sold?

I actually got my agent after a friend and I, who co-wrote a non-fiction book on mysteries, managed to sell the book ourselves. On the strength of that sale, we pitched ourselves to the agent of a friend of mine, and she took us on. That was in 1992 or 1993, I think, and I am still with the same agent.

I also “sold” my first novel without my agent. A friend was acquiring manuscripts of Southern mysteries for a small regional press in east Tennessee, and they accepted a book called Cruel as the Grave. They went on to publish two more of my books. The first novel that my agent sold for me was the first of four that I published with Kensington. It was called Posted to Death.

I like to have a notebook and pen handy because I never know when I might get an idea for a plot twist, a character, or some event crucial to the book. I jot down all kinds of things, and being able to scribble helps when I’m working through a book.

Maybe it’s that I have four college degrees: BA and MA in history, Ph.D. in medieval history, and MS in Library Science. I’ve spent roughly 23 years of my life in school.

Move from a small town in Mississippi to the big city in Houston to attend graduate school. Talk about culture shock!

That they have spent time with characters they enjoy reading about. That I have helped them forget about other things for a few hours while they read. I read fiction to escape from the everyday world, and if I can provide that to my readers, too, then I consider I’ve done my job.
R: Are you a plotter or a pantser?
A little of both, actually. I occasionally outline, if not the whole book, at least part of it. But I also like the looseness that comes from writing by the seat of my pants (some prefer to call it “organic” writing). I’m a strong believer in the subconscious, and letting it do its thing.
R: What do you do when you’re not writing? Any hobbies or party tricks? :)
I have a full-time day job as a medical librarian, and I also work four hours a week at Murder by the Book in Houston. So I manage to stay pretty busy. When I’m not working or writing, I love watching old movies, favourite old TV shows, and reading. I also enjoy traveling; I’ve been to England quite a few times.
R: Do you have any advice for beginning writers?

Write what truly engages you. If you don’t like science fiction, for example, don’t try to write it just because you think it will sell. Also read, read, read.

I’d be a full-time librarian, as I am already. If I had the talent, however, I’d love to be a symphony-level musician.

R: What new adventures are in store for Charlie and Diesel? What can we look forward to?

R: Are there any writers in particular that have influenced your style of writing?

My favorites are Margery Allingham, Elizabeth Peters/Barbara Michaels, Georgette Heyer, and Mildred Wirt Benson (who wrote the early Nancy Drew books). I think that the classic English and American detective stories in general have influenced me greatly.

R: What other writing genre would you like to try that you haven’t yet? Historical, screenwriting, etc?

Definitely a historical mystery. I have ideas for a couple of different books, but with my current work and writing schedule, there’s no time for me to work on them.

Lucy Arlington’s Every Trick in the Book.

Night or Day?  How about afternoon?

Dog or Cat? Both. I have two cats, and if I weren’t gone so long during the day I’d also have a dog or two.
Beach or Pool?   Pool, unless we’re talking Caribbean, then beach.

Steak or salad?  Can’t have one without the other!

Favorite Book?  The Tiger in the Smoke by Margery Allingham, closely followed by The Crocodile on the Sandbank by Elizabeth Peters

Hawaii or Alaska? I’ve been to Hawaii once, so I’d have to say Alaska, just because I haven’t been there yet

If I could trade places with anyone in the world, it would be _no one.______I can’t see trading my problems for those of someone else. Now, if I could have J.K. Rowling’s bank account, I’d go for that!

Dean, thanks for a great interview! Folks, to find out more about Dean and the "Cats in the Stacks" mysteries, you can visit:
www.catinthestacks.com
www.killercharacters.com the 10th of every month
www.femmesfatales.typepad.com – usually mid-month

Dean is giving away 2 copies of the latest Cats in the Stacks mysteries, OUT OF CIRCULATION, to two lucky readers! Just leave your name and email address in our comments section. For extra entries, you can:
Friend the Human on Facebook
Friend Dean/Miranda James onFacebook
Friend moi onTwitter, @RoccoBlogger
Tweet or FB about this interview/giveaway (3 extra entries)

Winners will be chosen using random.org and contacted by the Human, so it's important to leave that email address :)  Contest runs thru midnight, February 24.

The winner of our EJ Copperman giveaway is: KarenB! Watch for an email from the HUMAN!

Next week: I interview MOISHE and Joanne Fluke!
MEOW

Posted by ROCCO LOTEMPIO at 3:33 AM