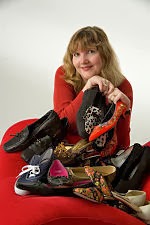 When I think of my blogaversary, I always think of Mary Janice Davidson!  MJ hasn't missed one yet, and this year is no exception!  this year she brings us an exclusive sneak peek from the next Betsy book, due out in July, UNDEAD AND UNWARY!  So...here's MJ!
Hello, ROCCO!  Happy blogaversary!
I’ve been working on edits for the next Betsy book, UNDEAD AND UNWARY, and with the hideous winter weather we’ve been enduring, thought I’d share a clip from the book.  And yep, the St. Paul Winter Carnival is a thing.


(For readers who haven’t read through UNDEAD AND UNSTABLE, Eric Sinclair, king of the vampires, can now stand sunlight for the first time in almost a century.  To say he’s giddy would be a vast understatement.)

“Dammit!”  He’d literally swept me off my feet and plunked me in the middle of our bed.  As I reared up on my elbows in prep to escape, he then plunked himself in the middle of the bed, right on top of me.  What little air there was in my lungs (I sometimes gasped or yawned or breathed out of force of habit) whooshed out.  “Gggnnnn!”


“Ged.  Gedduh.  Gedduh huck offme.”  I groaned and tried to elbow him away as he pressed me further into the mattress.  “Gnnn.  Dyin’.”


He was giggling against my neck and marking me with little nibbling kisses and all at once I cared a lot less about Jessica’s mysterious errands and more about getting out of my underpants.


“What’s got you all sexually charged?  Besides being a man and being conscious.”


“It was so wonderful.”  He pulled back until our faces were inches apart, his eyes—a brown so deep they were almost black—gazing into mine.  His dark hair was only slightly mussed, thick with a tendency to curl under at the ends, and his skin was utterly pale, not the slightest sign of a flush.  So he hadn’t been feeding.  It had to be something else.


“No.”  I shook my head so hard I made myself dizzy and my hair was everywhere.  Sinclair jerked back so the ends wouldn’t tickle his face, and laughed at my, “No-no-no.”


“The only thing marring its perfection was your absence, my own.”


“It is enchanting,” he corrected me, now mouthing the tender, shivery spot just behind my ear.  “Horribly horribly enchanting.  I was enchanted.”


“Are you drunk?” I asked, staring at the ceiling while the tips of his dark hair brushed the side of my jaw.  “I know it’s impossible but we’ve done the impossible before and it would explain a lot.  I would actually wish you were drunk over what you were really doing.  That’s what a bad idea I think that is.”


“The fairyland spectacle of the St. Paul Winter Carnival enchanted me.  It was all so wonderful,” he moaned, pressing a kiss to the hollow of my throat.  “How could you resist the sensual allure of the Moon Glow Pedestrian Parade?”


“Not to mention the Snow Slide.”


“Sinclair, it’s a carnival celebrating the fact that Mother Nature tries to kill us every winter.  Why the hell would I ever—wait, Snow Slide?”


“They should rename it the Sublime Slide,” he said and oh God I think he was serious.


“You went on the Snow Slide?”  And why the hell wasn’t I there with a camera?  And a video crew?  He was right, I should have gone if only to have the means to make a looping video of the vampire king riding down a hundred foot snow slide over and over and over, maybe shoving various children out of the way as he repeatedly cut in line.  Baring his fangs at their avenging mamas.  Then up and down and up and down again.  My kingdom for that gif.  “Okay, you’ve made the impossible happen.  Fine.  But I still don’t regret not going to the cold weird sleet rodeo, or whatever they’re calling it this year.”


“I also indulged in the Beer Dabbler.  Did you know they have over a hundred and fifty breweries plying their wares?”


“And they have a blood drive.”


“But you love—aw, nuts,” I groaned.  “Tell me you stayed away from the blood drive taking place in the middle of the day at an outdoor carnival celebrating the things water does when it gets below freezing.”  In fairness to them, how could they expect a vampire to take over the Snow Slide, sip beer, and then rob their blood drive?


“Of course I refrained,” he said, pulling back and looking offended.  “You know I only drink from you or ruffians we subdue.”


“Okay, I know you’re an old man, but really—ruffians?”  I yelped as his sharp teeth grazed my neck and his tongue followed, soothing the sting.


“Ninety is the new thirty,” was his muffled reply.


“An ice sculpture of you would satisfy all my sexual needs.”


I laughed as I shivered; I couldn’t help it.  The mental image was just so hilarious and gross and cracked.  “I hate you.”


“In fact,” he replied, lips ghosting over mine, “you adore me.”


“Did you know?”  He pulled back and gazed down at me.  “Ice is much more beautiful in sunshine,” he said in a low voice, a serious tone, like it was a delicious secret he wanted only me to know.”  “It’s like light made solid.”

Posted by ROCCO LOTEMPIO at 6:35 AM