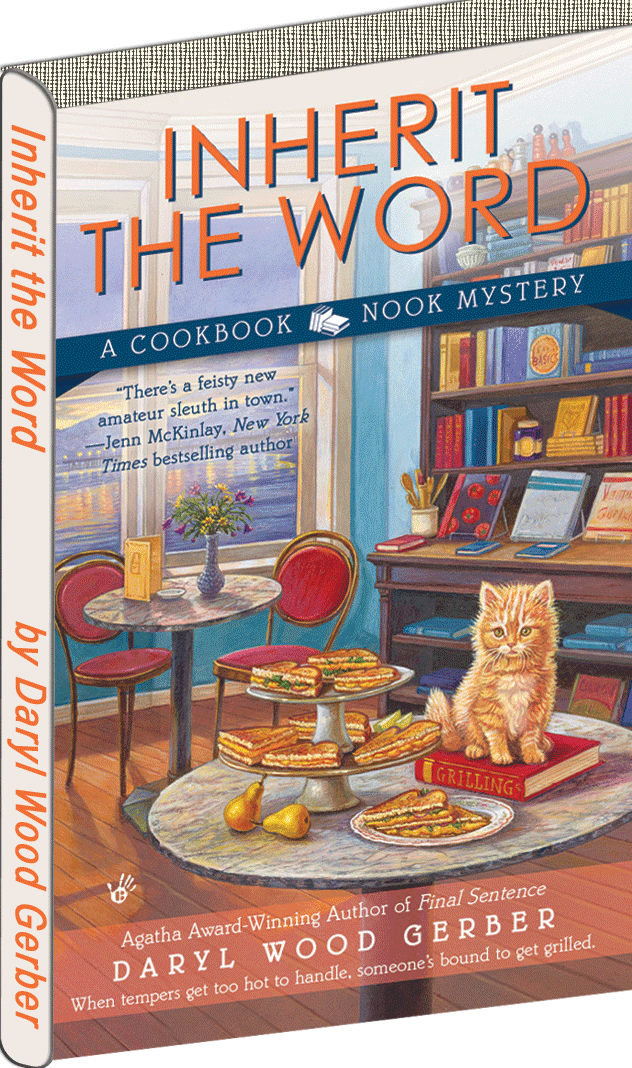 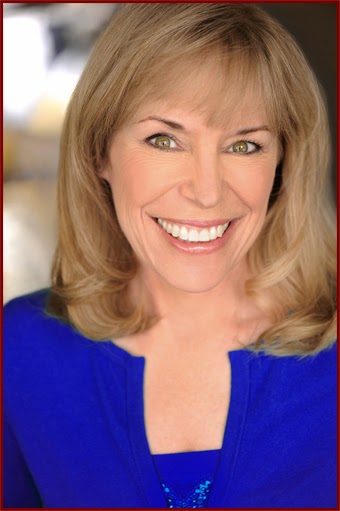 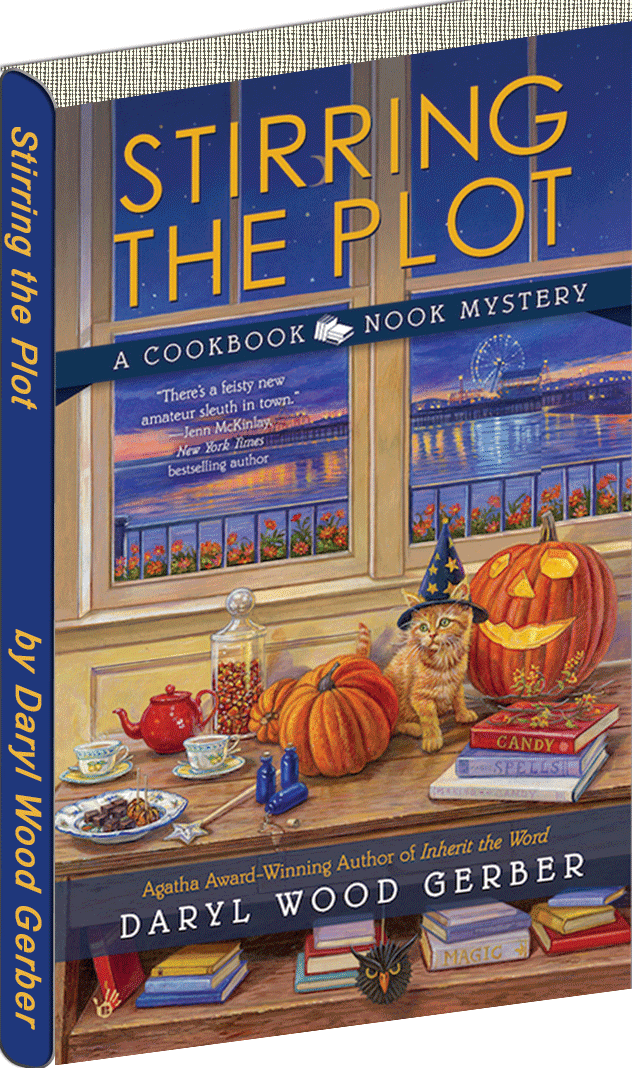 My guest this week...daryl wood gerber!

Daryl Wood Gerber writes the nationally bestselling Cookbook Nook Mystery series featuring a cookbook store owner who is an avid reader and admitted foodie, set on the coast of California.  As Avery Aames, she pens the Agatha Award-winning, nationally bestselling Cheese Shop Mystery series featuring a cheese shop owner amateur sleuth, set in the fictional town of Providence, Ohio. Daryl’s short stories have been nominated for the Agatha, Anthony, and other awards. Fun tidbit: as an actress, Daryl has appeared in “Murder, She Wrote” and more. Visit Daryl or Avery at www.darylwoodgerber.com. “They” blog on www.mysteryloverskitchen.com as well as www.killercharacters.com


R:  Welcome to the blog, Daryl! Tell us a bit about yourself and how you became interested in writing.


I was always interested in writing. I tested my hand at Nancy Drew and wrote a play when I was 12, but I had a 7th grade teacher who told me I stunk which struck me to the core, so I set aside my pen and focused on acting. During my career as an actress, I studied screenwriting and wrote a few screenplays, hoping I could kick my career up to another level. After a few attempts, I realized I adored writing. But then we moved far, far away from Los Angeles for my husband’s career. So much for acting. That’s when I got serious about writing. I’d always loved mysteries as a kid. I read all the Nancy Drew books one week while I had the measles. I started taking writing classes; I found a critique group; I joined an Internet group called the Guppies (part of Sisters in Crime) and learned about the business. And then I persevered. My first book did not get published.


R: What writers in your genre would you say have made the greatest influence on your writing?


Because I like and write both mystery and suspense, this will be a varied group: Agatha Christie, Lisa Gardner, Michael Connolly, Harlan Coben, Meg Gardiner, and a number of cozy authors including Krista Davis, Janet Bolin, Kate Carlisle, Hannah Dennison, and more...


R: Tell us about your Cookbook Nook series. How did the idea for this come about?


I was scheduled to do a signing at a culinary bookstore in Virginia. The moment I walked into the store, I fell in love. There were not only cookbooks but fiction and nonfiction books about food. There were also culinary decorative items, foodie puzzles, aprons, and a whole section for children. Adorable! It was such a fun place to visit. I wanted to spend lots of time there. Now that I’ve set that as a setting in my series, I go every day.


R:  You have a new “Cookbook Nook” coming out this October. I’ve read the preview and it sounds fantastic. Can you tell our readers a bit about it?


Aha! Trouble is brewing, with a dash of murder. Jenna Hart, a former ad executive, has returned to Crystal Cove, California to help her aunt run a culinary bookshop and café. In Stirring the Plot, Halloween is a big deal, involving a spooky soiree where the Winsome Witches, a fund-raising group, gather to open up their purse strings and trade superstitions. But party magicians, fortune-tellers, and herbalists are only the beginning of this recipe for disaster. Jenna has packed The Cookbook Nook chock-full of everything from ghostly texts to witchy potions in anticipation of the annual fund-raiser luncheon. But there’s one unexpected addition to the menu: murder. When the Head Priestess of the Winsome Witches is found dead under mysterious circumstances, there’s no logical answer and plenty of blame to go around.


R: And, of coruse, I have to ask – is the adorable cat in your series modelled after any cat in particular?


Tigger, a rescue ginger cat that finds Jenna in the first book, is all in my imagination, but I had lots of cats and kittens when I was a girl. My mother wasn’t a dog person. I loved how they would scamper and get into everything! Everything!!! When I married my husband, I found out he was allergic to cats. So now we have Sparky, an adorable goldendoodle who, very much like Tigger, gets into everything, too.


R:  Do you have a “how I got my agent” story you’d like to share?  How did you feel when you got the call your first novel had sold?


Regarding the day I got the call…that was for the Cheese Shop mystery series that I write under the name: Avery Aames. I wasn’t represented by an agent at the time. I was shopping a manuscript. I was ready to give up writing if that manuscript didn’t get picked up. I’d been at it for a long time. I’d written a number of other manuscripts. I’d faced a lot of rejection. Most of the rejections I’d received said: “I love your writing and style and character…but this particular story isn’t for me.” I was missing a “hook.” I worked, toiled, took more classes, and cried. Truly I was going to give up, but I was actively working with an agent I’d met at a conference. I was trying to come up with a hook for a cozy series. She liked my work a lot, but she didn’t want to represent the manuscript that was circulating. One day she called and asked if I could write about cheese. I could. I had worked as a caterer, chef, and more. I knew food. I auditioned for what is known as a work-for-hire. The publisher wanted a series set in a cheese shop. Within a few weeks, I was offered the series. And on cloud nine!!!


Interestingly enough, I don’t have the same agent I did when I was offered the Cheese Shop series. That agent has left the business to become a therapist. After she left, the agency didn’t “fit” me; I needed to find someone who really understood me and the goals I’d set. I recently signed with a new agent. He was a referral from an editor at another publishing company (other than the one I’m with). I met the editor at a conference. We were simply chatting, and he suggested my current agent. He thought we would click—we did!  [Can you see how important it is for new writers to go to writers’ conferences?]


R: What’s a must have for you when you are writing? What aids the creative process?
Quiet or, if there’s a lot of noise, symphonic, wordless music streaming through my earbuds. Also an outline. I need a structure, a road map if you will, about where I’m going. I need to know who did it and why. And I can’t write on an empty stomach. (Note from ROCCO:  Who can, meow!)


R: What is one thing your readers would be most surprised to know about you?


In my early twenties, I hitchhiked by myself through Ireland.


Jumped out of a perfectly good airplane. [With an instructor.] Wild, exhilarating fun! I did it a second time, too.


R: What do you hope readers will most take away from your writing?
A sense of justice and a love of family or extended family. And the power for a single individual to make a difference in this world.


As mentioned above, a plotter. But once I’ve got the outline, then I’m a pantser. I stray from the outline a lot. I allow the characters to come alive and change the program. But I have to start with a clear objective.


R: What do you do when you’re not writing? Any hobbies or party tricks? :)


I golf, cook, garden, play with or walk my dog.  I exercise. I love to read. Mysteries, thrillers, suspense. I don’t have any party tricks, although I’m not bad at pulling a quarter from a person’s ear. LOL I can NOT juggle, although I do feel like I’m always juggling my writing schedule. J


Don’t give up! Take classes, find a critique group – an honest critique group. And write more than one book. The first is not always your best.


R: What book is on your TBR shelf you can’t wait to get to?


The next by Hannah Dennison, MURDER AT HONEYCHURCH HALL.


Steak or salad?  Steak with a nice crisp Caesar plus a Parmesan crisp.


Dirty Martini or Pina Colada? Neither, thank you. Margarita.


Finish this sentence:  If I could meet anyone in the world, past or present, it would be Jesus and then William Shakespeare and Mark Twain and Audrey Hepburn.


If I had just one wish, it would be to be healthy enough (and lucid enough) to see all my kids’ (original, step and surrogate included) kids graduate college and get married. I think I might have to live past 100 for all of that.


If I could trade places with anyone in the world, it would be no one. I love my life!

Thanks for a great interview, Daryl! Folks, here are all the places you can find her!

Daryl will be giving away a copy of either Inherit the Word or Final Sentence to two lucky readers!
Just leave a comment with your email address below in the comments section. Be sure to mention which book you prefer.
For extra entries you can:
Friend the Human on FB
Friend Daryl or her alter ego, Avery Aames, on FB
Follow Daryl and/or Avery on Twitter
Follow Rocco on Twitter @RoccoBlogger
Tweet or post on FB about this contest!
Contest ends midnight, May 10! Good luck!


ROCCO
Posted by ROCCO LOTEMPIO at 3:33 AM