In the Hotseat...I interview Jay, from CATWALK!

Our good friend Sheila Webster Boneham writes the "Animals in Focus" mysteries, which star Janet, an animal photographer, and her Aussie, Jay.  Jay graciously consented to do an interview for us to spotlight Sheila's latest, CATWALK, which is available in stores TODAY! 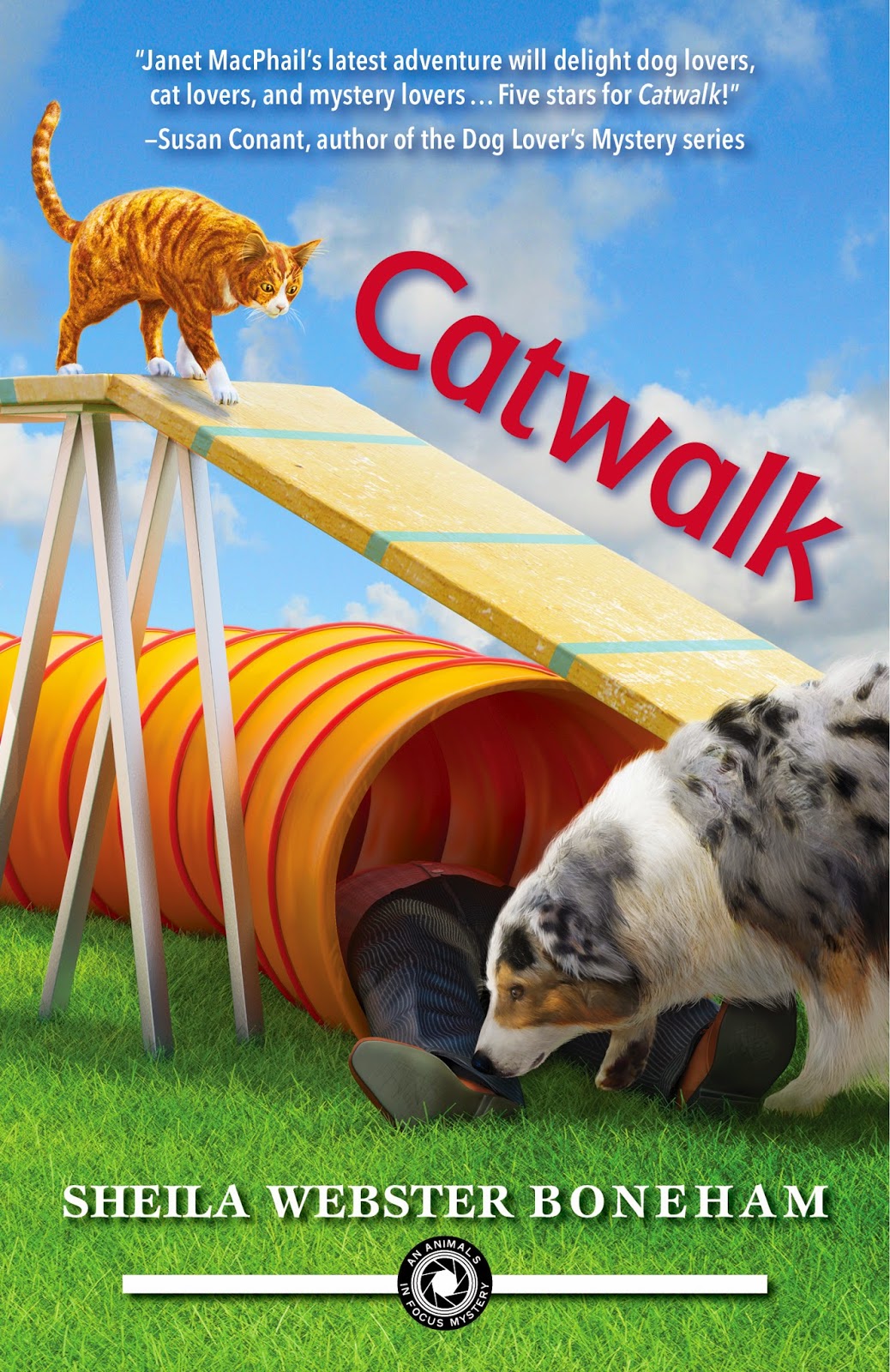 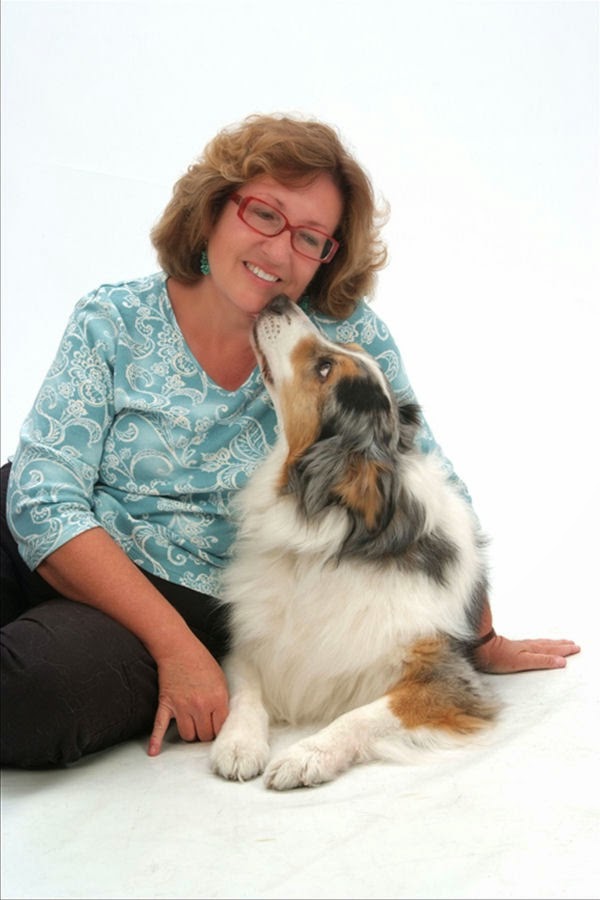 Sheila Webster Boneham writes fiction, nonfiction, and poetry, successfully crossing the lterary-popular “divide.” Drop Dead on Recall (Midnight Ink, 2012) won the 2013 Maxwell Award for Best Fiction Book from the Dog Writers Association of American and was named a Top Ten Dog Book of 2012 by NBC Petside. The sequel, The Money Bird, was released in August 2013, and Catwalk is available now or pre-order. Sheila is working on the next book in the Animals in Focus series.

Six of Sheila’s non-fiction books have been named best in their categories in the Dog Writers Association of America (DWAA) and the Cat Writers Association (CWA) annual competitions, and two of her other books and a short story have been finalists in the annual competitions. Her book Rescue Matters! How to Find, Foster, and Rehome Companion Animals (Alpine, 2009) has been called a "must read" for anyone involved with animal rescue. Her essay on corvids (crows, magpies, etc.) won the 2014 Prime Number Magazine Award for Creative Nonfiction.
Sheila’s books are available in paperback, ebook, Audible, and large print editions from all the usual sources. Autographed copies can be ordered here: http://www.sheilaboneham.blogspot.com/p/autographed-books.html. You can keep up with news about Sheila’st books, current promotions, and more at Sheila’s blogs/websites: www.writersandotheranimals.blogspot.com and www.sheilaboneham.com. You can also connect with Sheila on Facebook at her personal_page and her  Writers&OtherAnimals_Group.
About Catwalk: Catwalk is the third entry in Sheila Webster Boneham’s popular “Animals in Focus” series. This time out, animal photographer Janet MacPhail is training for her cat Leo’s first feline agility trial when she gets a frantic call about a “kidnapping.” When Janet and her Australian Shepherd Jay set out to track down the missing party, they find themselves enmeshed instead in the world of politics of feral cat colonies and endangered wetlands. Janet’s got her hands pretty full, what with her mom’s nursing home romance, her own relationship with Tom, and her pet’s upcoming agility trials. But when a body is discovered on the canine competition course, it sets Janet on the trail of a killer.

"Animal photographer Janet MacPhail's latest adventure will delight dog lovers, cat lovers, and mystery lovers. Janet is excellent company, and although Leo the cat plays a starring role, I'm happy to report that Leo does not eclipse Jay the Aussie, who has become one of my favorite fictional dogs. Indeed, if Jay ever needs to move out of the pages of Sheila Boneham's mysteries and into a nonfiction house, he'll be more than welcome in mine. Five stars for CATWALK!" ~ Susan Conant, Author of BRUTE STRENGTH and other novels in the Holly Winter series of Dog Lover's Mysteries 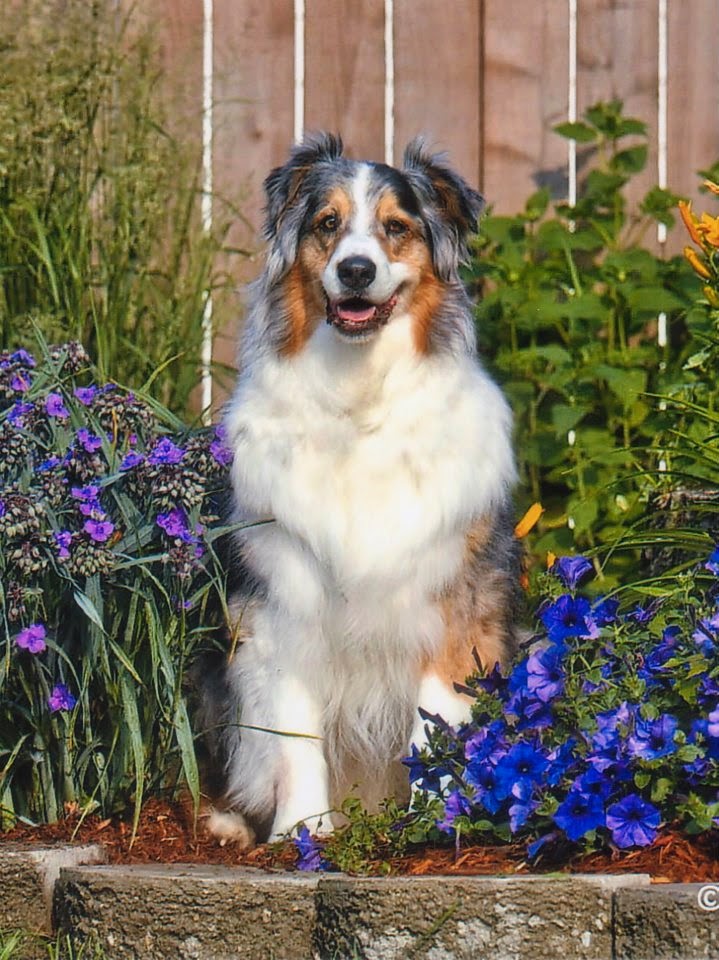 
R: Hello, Jay and welcome. Describe a typical day in your life.


Jay: Wow! Thanks ROCCO! I know you don’t usually interview dogs, so I’m happy to be here! Every day is different, you know? Mornings are so exciting because A NEW DAY! Yeah! New things to smell, new things to eat! As the protagdog of the Animals in Focus mysteries, and Janet MacPhail’s best buddy/guardian/playmate/footwarmer/crumb-picker-upper, I’m a very busy dog, and my days are just never the same. Especially when Janet does what our friend Goldie calls “sticking her nose in” things (which is ridiculous when you think about it, since people noses don’t seem to be very good—sorry, but it’s true). Busy busy! Woof!


R: How did you and Janet get together?


Jay:You mean we haven’t always been together? Oh, sure, I’ve heard the stories…my breeder sold me to some dopeydoodle who neglected my education and let me get fat and then gave me back to my breeder when I was all grown up, and she was going to keep me and then Janet saw me and I saw her and we fell head-over-tails in love and I came to live with Janet. But I don’t remember any of that. I think it’s hooey. Yeah, I’ve always been with my Janet.


Jay:Oh cats! I love cats! I have a cat! My cat is Leo and he’s lots of fun and very brave. (Except puleese tell him to stop sticking his sharpclaws in my cheeks and licking my lips after I eat because it hurttickles!) I see lots of cats when I take Janet for her walks. Cats here, cats there. I don’t know their people names but there’s Scourge of Chipmonks down at the corner, and Leave Me Alone with her hissyface over on Smells Like Rabbits Street. I smell a lot more cats than I see, and I see cats I can’t smell because they’re looking out their window. But I love cats! Hey—you’re a cat! I love you! Woof!


R:  Tell us about your latest adventure, CATWALK – how does it feel to star in a book with a “cat” in the title?


Jay: (See previous answer!) But seriously, it’s fine with me. I think that title is a sneaky play on the dogwalk obstacle in agility. I love agility! Oh, yeah, so the book. People seem to think books and people have to be all dog or all cat but that’s just silly. Diversity! That’s what I say. My cat Leo was an important part of my other investigations, and I do help save some kitties—awwww!—in Catwalk. And I’ve been training and competing with Janet for a long time so it’s only fair that Leo gets to go to a show. Shhhh—don’t tell him because I’ll never hear the end of it, but I’m kind of proud of the little booger. Woof!


R:  How do you cope with Janet’s penchant for getting involved with murder?


Jay: Janet? She never murdered nobody. She would NEVER do that except maybe somebody that hurt me or Leo or Drake or Tom or Goldie or puppies or kitties. Then I think she’d bite their butts! Oh, wait—you mean those investigation things. Sometimes I help! I can track things (since Janet’s nose is sort of dysfunctional) and sometimes I warn her about badpeople (her hearing’s not so hot, either), and sometimes I have to stop a badpeople or save somebody. I can cope with anything if Janet is there.


R:  What do you love most about Janet?  Dislike most?


Jay: Janet’s perfect! I love Janet! She gives me yummy doggydinner and yummy doggybreakfast and yummy carrotsnacks and yummy goodies when I do good. I don’t dislike anything about Janet except maybe that sometimes she doesn’t take me with her when she goes somewhere and that bites. But she comes home! And I get to be with her! I love Janet!


R: So tell me how you feel about this woman, Sheila Boneham Webster? Does she portray your adventures accurately?


Jay: I a little embarrassed, but my reading skills are pretty minimal. I mean, once in a while I sneak in some practice, but I have to sniff out the words very slowly, so I haven’t read the books. I did get to listen in the car to somebody reading Drop Dead on Recall and The Money Bird, and the parts about me were pretty good. But I don’t dwell too much on the past, ‘cause, you know, I’m a dog! Woof!


R:If you could change one thing about Janet,  what would it be?


Jay: Can I change two things? She would feed me as much as I want to eat, and she would take me everywhere she goes. Woof!


Jay: Cats wear tuxedos? I did not know that! I’d say Leo is my sidekick, but I think he’d side kick me for sure since we’re really more equal partners with different skill sets. Ha! I love that—skill sets. I heard that on TV. But back to those tuxedos—do you wear a tuxedo? I wear a collar, but I think my blue merle fur is prettier than peopleclothes. Wow—cats in tuxedos! Woof woof woof!

Thanks, Jay, for an interesting interview!
Leave a comment and your name will be in the basket for a free autographed copy of Drop Dead on Recall, The Money Bird, or Catwalk! One winner will be drawn at random on September 10.  Be sure to add your email address so we can get in touch with you!
Posted by ROCCO LOTEMPIO at 2:20 AM