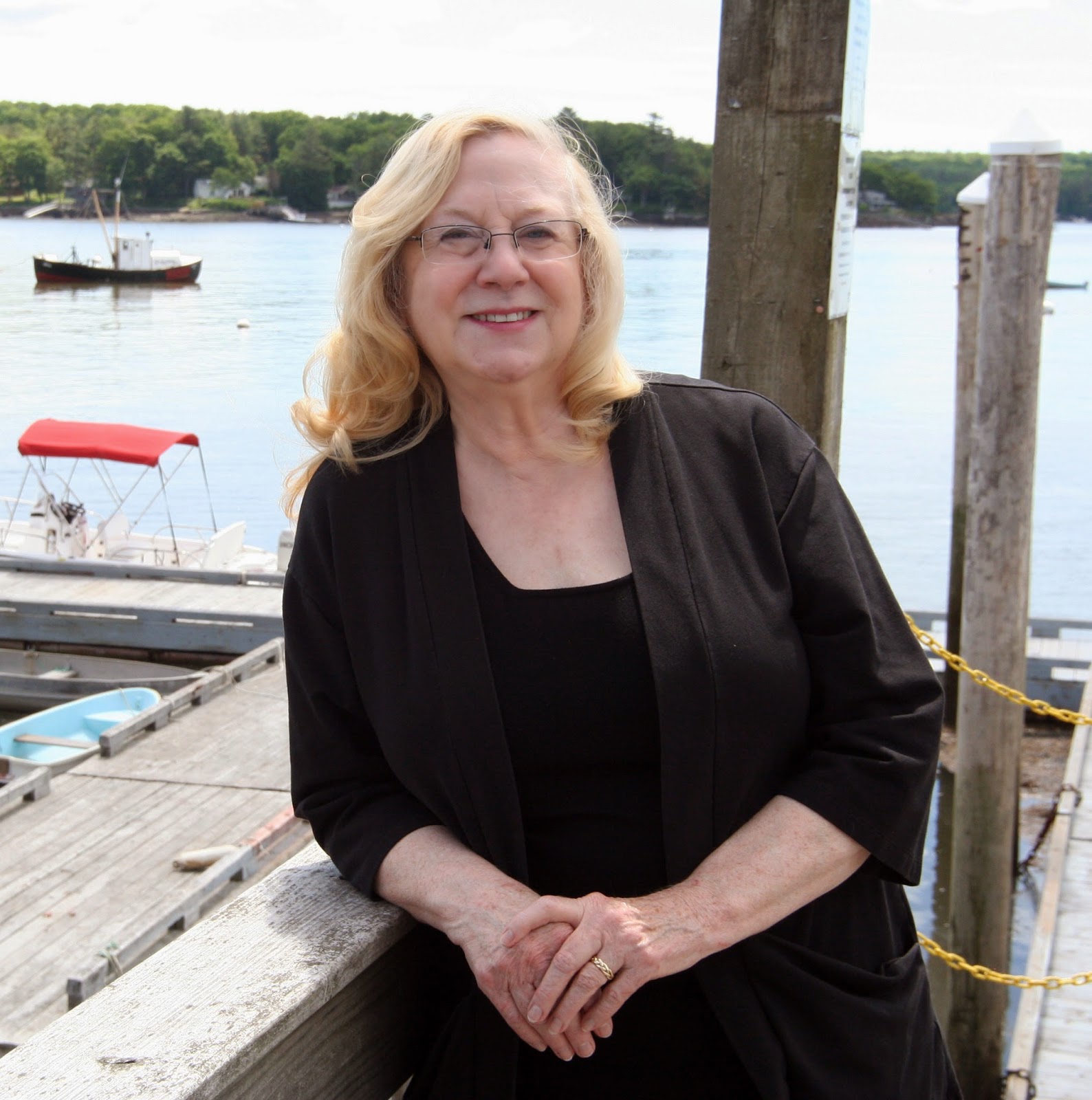 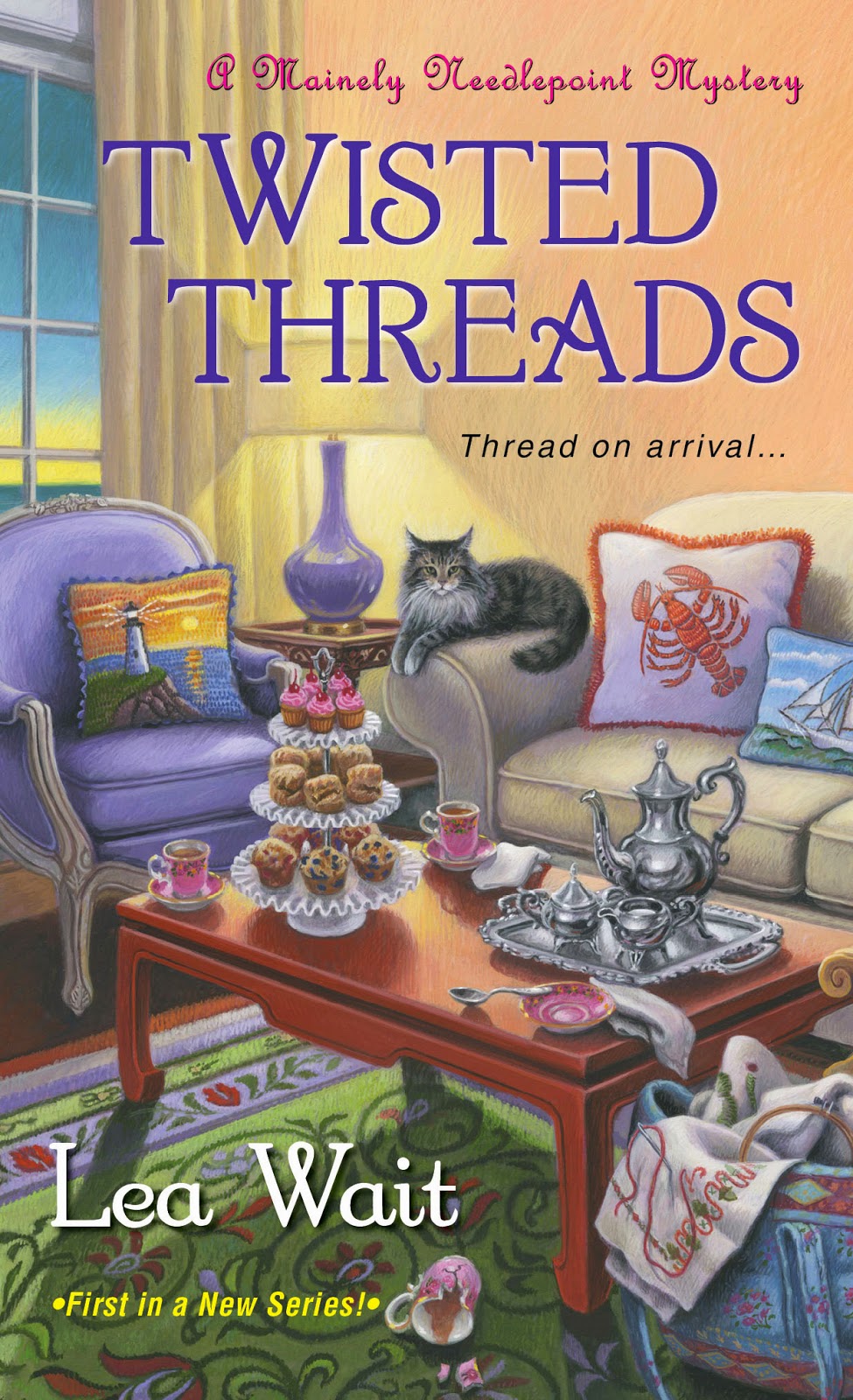 Meow! This week my guest is author Lea Wait!

Maine author Lea Wait writes the Agatha-finalist seven-book Shadows Antique Print mystery series (the most recent of which is Shadows on a Maine Christmas) as well as the new Mainely Needlepoint series, which debuted with Twisted Threads in January, and historical novels for young people.  She lives on the coast of Maine with her artist husband and her black cat, Shadow, both of whom help her plot and plan. Shadow pulls her book outlines down from Lea’s bulletin board if they’re not to his liking. In her free time Lea likes to row, watch ocean waves roll in, and drink champagne. (The champagne only when a book is finished ... or she has a new contract.) With Shadow’s help, she’s also learning to do needlepoint.

I’ve wanted to be a writer since I was in second grade. I supported myself (and my family) as a corporate writer (executive speeches, films, videos, etc.) for years. When I was in my 40s I realized “if not now, when?” and started writing fiction. My first book was published in 2001, and my 13th and 14th will be published this year.

R: What drew you to the cozy mystery genre?

I enjoyed reading cozies, and, as a new writer of fiction, liked the idea of following a pattern when writing. (Murder, certain number of suspects, confrontation, and the bad guy – or gal – gets caught.) After I’d written a couple of books I realized there were a lot of sub-genres of cozies, and had fun experimenting with some.

R: Tell us about your Mainely Needlepoint series. What gave you the idea for that? Do you do needlepoint yourself?

The idea of centering a series on needlepoint actually came from my agent and editor. I had never done needlepoint (I’ve just started to learn) but the idea of learning a whole new craft … and new subject matter .. intrigued me. I do know something about antique needlework since I’m a 4th generation antique dealer, so I decided historical as well as contemporary needlework would be a part of my series.

R: Tell us about Twisted Threads, the first release in that series.

Twisted Threads introduces the Mainely Needlepoint series. Angie Curtis’ mother was a single parent with a shaky reputation. She disappeared when Angie was ten. Angie was then brought up by her grandmother, but it wasn’t easy growing up with her family history. When she was eighteen she took off and headed west, ending up in Arizona, where she worked for a private investigator. She’s now 28, and her grandmother calls to say, “It’s time to come home. They’ve found your mother.” Angie goes back to Haven Harbor, determined to find out what really happened to her mother.  When she gets there she finds her grandmother has started a custom needlepoint business and is being cheated by the agent she works with.  So Angie decides to help solve her grandmother’s problem, too.

R: You also write the Shadows Antique series. Who inspired the character of Maggie

Maggie’s very different from Angie. Angie’s street smart, but not school-educated. Maggie has a doctorate and teaches at a community college as well as being an antique print dealer. She’s almost forty, a widow, and is seriously thinking about adopting one or two children. Many people have said Maggie is me – but I’ve never taught, she’s younger than I am and definitely braver. We do have in common being antique print dealers and being interested in adoption – I adopted my four daughters as a single parent.  So – Maggie’s a lot more like me than I like to admit.

R: You write YA historicals, which genre do you prefer, those or cozies?

I love them both. I especially love doing the research for both genres. I’ve always loved historical fiction, and I hope my books will make the past real to kids today. I also like the break of writing different types of fiction … I never get bored!

I was lucky to sell my first book without an agent, by connecting with an editor at a writers’ conference. How did I feel? About twelve stories high! I knew no one at the conference, so I called my best friend and talked for about an hour straight, and then treated myself to a nice dinner – with champagne. It was one of the best days of my life.

Quiet. (I can write nonfiction under any conditions … but fiction requires more focus.) When I’m in the middle of a book I’m surrounded by notes on plots and characters and weather and lists of evocative words. And cups of tea!

I would have loved to have been in Boston when the Declaration of Independence was read in the churches there.

I once smuggled drugs into Calcutta, India.
R:  We need to hear more about that!
They were medications legal here in the US, but at that time they couldn’t be imported into India. I was taking them, along with a lot of other supplies, to several orphanages in India. At the end of the trip I brought my new daughter, who was about ten, and a twelve year old boy being adopted by another single parent, home to the United States. A wonderful experience!

Probably people would think it’s crazy that I’ve tasted all the poisons I’ve written about in my books. (I wanted to know what the taste was, to see my characters’ reactions. Research!)

I hope they’ll enjoy a good read that takes them out of their every day worlds … and maybe they’ll learn a little along the way.

R: What are you working on at the moment / next?\

Plotter, definitely! I need to know where I’m going, even if I change the direction slightly as I write.

I’m lucky to live on the coast of Maine, where I can escape to watch the ocean. I love rowing my thirteen-foot skiff.

Of course, I do a lot of reading. And time with my grandchildren (I have eight) is special – as is the time I spend with my husband, who’s an artist. A lot of my non-writing time is spent at museums and art galleries.

Read. Read everything – not just in the genre you want to write in. And think about what you’re reading – what works, and what doesn’t. Being a good critic will help you be a better writer.

Dog or Cat? (answer carefully) cat! Last year I adopted a crazy black cat who enjoys sitting on my keyboard and tearing papers from my bulletin board. I think she believes she’s helping my creative process.    (R: Yes, black cats can be VERY inspiring....)

Beach or Pool?   Beach! (except in winter, when an inside pool is wonderful)

Steak or salad?  Steak, grilled rare by my husband.

Finish this sentence:  If I could meet anyone in the world, past or present, it would be Thomas Jefferson. He was a brilliant man, full of contradictions. He fascinates me.

If I could trade places with anyone in the world, it would be ? So many possibiitities … but, bottom line, I like who I am and where I am.  I think I’ll stay put. ____

Where I blog with other Maine mystery writers:  www.mainecrimewriters.com

Lea will send a signed copy of TWISTED THREADS to one reader of this blog!