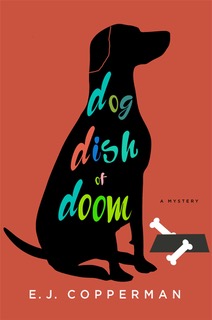 Dishing up the Dog Dirt! On ROCCO’s blog!
E.J. Copperman
Much to what I’m sure is Rocco’s chagrin, my latest novel—the first in a new series—is called Dog Dish of Doom. Alliteration aside, the title seemed fairly obvious when you consider that a (human) man is stabbed in the back and lands face down in his dog’s water dish. (In the book.)
Titles are a funny business, and I don’t mean “funny ha-ha” necessarily. For me they should convey at least a sense of humor because my books are intended to make you laugh. Or at the very least encourage you to laugh. So I’ve had titles like Spouse on Haunted Hill and Inspector Specter in my Haunted Guesthouse series, and—spoiler alert!—the second book in the Agent to the Paws series, which begins with Dog Dish of Doom will be Bird, Bath and Beyond.
A title is something meant to convey a great deal of information in a very few words. First, it should have some sense of what the story is about. I think Dog Dish of Doom manages that. Second, the title should convey some feeling of the book’s tone. Thrillers tend to get short, (pardon the expression) punchy titles. If I’d named Dog Dish of Doom something like Deadly Dish you might get the wrong impression. Especially if the title were in big chunky letters on the cover with a picture of rain-washed city streets.
The book’s title should also be somewhat intriguing. The idea, after all, is to get the reader interested enough to at least pick up the book and think about buying it (buy it!). If the title of this book was This Guy Gets Stabbed and Falls in His Dog’s Water Dish and the Dog’s Agent Has to Figure Out Who Did It you’d get a really strong sense of the story, but you wouldn't necessarily feel like anything had been held back other than the name of the murderer, which of course is—you didn’t think I was going to tell you, right?
Some titles are—and I know you’ll be shocked—not actually written by the book’s author. I wrote a book called Deadlier Than the Sword (a “clever” pen reference) which came out as Written Off. That’s fine; the publisher had another marketing strategy and I had no problem with it. But when people ask me why the book has that title, I can point to the fact that the main character is indeed a mystery writer and… that’s about it. I wasn’t involved in the process that chose the title. I don’t think it’s a bad title. I just don’t have insight into its genesis.
For Dog Dish of Doom, trust me that’s my title. The acquiring editor liked it right from the beginning and she still chuckles when we mention it today. That’s good enough for me.
Whether or not a title can guarantee a book commercial success is something I can’t address. If To Kill a Mockingbird, which is a brilliant book, had been named The Trial of Tom Robinson, would it have been ignored? I can’t tell you. I do know that To Kill a Mockingbird is a better title than The Trial of Tom Robinson.
So if you’re interested in a story where a woman who runs a theatrical agency for animals (the actual non-human kind) and has to solve a mystery to help her client, a large furry dog named Bruno, appeals to you, pick up Dog Dish of Doom whether you find the title amusing or not. After all, it’s just four words. The book has 82,000.

E.J. Copperman is the author of the Agent to the Paws mystery series, beginning Aug. 15 with Dog Dish of Doom. E.J. also writes the Haunted Guesthouse mystery series, the Mysterious Detective mystery series and with Jeff Cohen, the Asperger’s mystery series. That doesn’t leave a lot of time for hobbies, so E.J. takes the occasional nap. E.J. does have a pet dog named Gizmo who was in no way the inspiration for Bruno. Bruno is a good dog.

Want to win a copy of DOG DISH OF DOOM?
To enter, leave a comment on this blog post with your name and email address (entries without email will be disqualified). For extra entries, you can do any or all of the below:

Winner will be chosen at random using random.org.  Don’t forget to mention all you’ve done in your comment. Good luck!  US entries only, please.  Contest ends midnight, August 22.

Posted by ROCCO LOTEMPIO at 2:44 AM