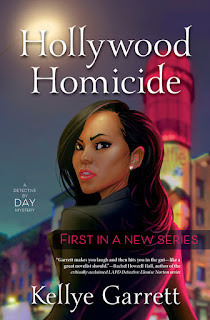 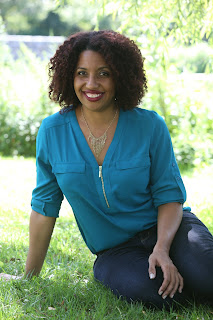 Kellye Garrett spent 8 years working in Hollywood, including a stint writing for the CBS drama Cold Case. People were always surprised to learn what she did for a living—probably because she seemed way too happy to be brainstorming ways to murder people. A former magazine editor, Kellye holds a B.S. in magazine writing from Florida A&M and an MFA in screenwriting from USC’s famed film school. Having moved back to her native New Jersey, she spends her mornings commuting to Manhattan for her job at a leading media company—while still happily brainstorming ways to commit murder. Her first novel, Hollywood Homicide, will be released by Midnight Ink on August 8, 2017. It was a Library Journal Debut of the Month.

Thanks ROCCO I’m a recovering TV writer (Cold Case) who people always said seemed too happy to be brainstorming ways to murder people. When I moved back to my native New Jersey about five years ago, I decided to use my experiences as a semi-successful, kinda-broke former black writer in Hollywood to write a mystery series about a semi-famous, mega-broke former black actress in Hollywood.
I was literally driving down the street and I saw a billboard offering a reward for information on a murder. At the time I was unemployed, so my first thought was “I should solve that for the money.” My second thought was, “That’s a horrible idea.” But I did use that for the basis of the book. My main character Dayna Anderson tries to solve a hit-and-run she witnesses to get the reward money and help save her parents’ home.
I went all out with creating bios and backstories for all five of my main characters. I even chose celebrity doppelgangers for each of them. Of course, those stories evolved as I was writing but it was fun to create these entire lives. Interestingly, I was most invested in picking out their names.
The blank page scares me more than Freddy Krueger so I’m definitely an outliner. I have an MFA in screenwriting from USC so I use a lot of what I learned about movie and TV show structure to figure out my plots. All my books have three acts and I make sure each chapter ends with a bit of a cliffhanger. The outline is just the jumping off point though. I still change things as I write.
I have to choose?? As a mystery lover, I have to say plot. My favorite series are ones where the main character is actively investigating. And there’s nothing I love more than a good twist or reveal. On the flip side, it’s the character that makes me come back to a series.
The biggest challenge was definitely have enough faith in myself to just finish the book. I’m a writer who hates writing. (Weird, I know.) In terms of inspiration, I did the cliché’d write a book that you want to read. There are so few books with black main characters that it was important for me to create Dayna.
In 2014, I took part in a contest called Pitch Wars, which pairs an experienced writer with an unagented writer to help revise their manuscripts for an Agent Round where agents can request to read it. Hollywood Homicide (then called IOU) was selected. Michelle Richter asked to read it during Agent Round. I met her in person a few days later at the Crime Bake conference and she offered me rep at the hotel bar!
Book 2 and Book 3 of the Detective by Day series, which will be out in 2018 and 2019.
Not enough. I have a 9 – 5 so I have squeeze in writing when I can. I tend to write for a couple of hours right before bed. I don’t write every day even though I should.
Just do it. I also suggest finding friend who also write so that you can give each other notes and hold each other’s hands during the emotional roller coaster of going from finishing a manuscript to actually getting it published.
I’m not known for doing crazy things. The most brave thing I did was turn down a job promotion that would have doubled my salary to go to film school.
I’ve been told more than once that “I thought you’d be taller.” I’m barely 5’4.
Where can I find mysteries by writers of color and marginalized voices?
We are out there. Unfortunately, we can be hard to find. Sisters in Crime has Frankie’s List (http://www.sistersincrime.org/page/FrankiesList), which is a compilation of published marginalized voices so I would definitely start there. Some of my favorites are Valerie Wilson Wesley, Rachel Howzell Hall, Naomi Hirahara, Steph Cha, Kyra Davis, Sujata Massey, Gigi Pandian, Linda Rodriguez, Alexia Gordon and Kristen Lepionka.
Definitely on my website: KellyeGarrett.com

Just for Fun:
Night or Day?  Day
Dog or Cat? (answer carefully)  Cat!! (I’m allergic though so hopefully I don’t lose any points for that.)
Beach or Pool?   Beach
Steak or salad?  Steak, three meals a day if my waistline could get away with it.
Favorite Drink?  Snapple Lemon Iced Tea but only from a glass bottle.It just tastes better than the exact same drink in a plastic bottle. I’m sure it’s a psychological thing.
Favorite Book?  Such a hard question. My favorite series may be the Kinsey Millhone series by Sue Grafton.
Favorite TV Series?  The Wire
Favorite Actor:  Chadwick Boseman, solely because I just saw the Black Panther trailer.
Favorite Actress: Viola Davis
Dirty Martini or Pina Colada? Pina Colada. Try it with Kahlua if you haven’t before. So good.
Hawaii or Alaska? Hawaii though I’ve never been to either.
Finish this sentence:  If I could meet anyone in the world, past or present, it would be my maternal grandmother. She passed away literally days before I was born.
If I had just one wish, it would be to eat and drink anything I want without exercising and never go above a size 6. (World peace would be a very close second though.)
If I could trade places with anyone in the world, it would be J.K. Rowling because she’s an author, a billionaire and seems so cool on Twitter.

Kellye will give away one copy of her debut novel to one lucky commenter! To enter, leave a comment on this blog post with your name and email address (entries without email will be disqualified). For extra entries, you can do any or all of the below:

Winner will be chosen at random using random.org.  Don’t forget to mention all you’ve done in your comment. Good luck! US entries only, please! Others will be disqualified (sorry)  Contest ends midnight, August 26!