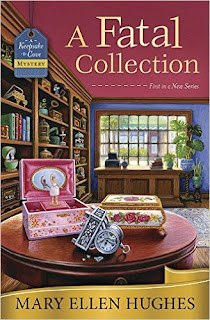 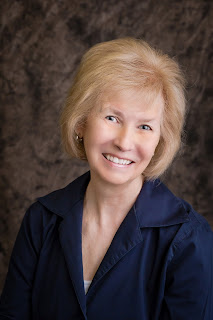 Are cats a necessary element to mysteries? I can guess what Rocco’s answer would be. Mine would be a bit more qualified.

Necessary? No. There’s scads of good mysteries with no felines, whatsoever. But enriching? I definitely think so. Which is why I wrote a cat into A Fatal Collection, the first of my new Keepsake Cove series.

Jagger, a large Russian Blue mix, was owned by the aunt of my main character, Callie Reed. Aunt Mel told Callie on her first visit that she kept the cat’s name after bringing him home from the shelter and seeing him “strut around the cottage like a rock star.”

When Callie’s aunt died suddenly during that visit from what was officially ruled an “accident”, Callie learned to her astonishment that she’d inherited her aunt’s music box shop and amazing fairy-tale cottage, as well as… her cat. Jagger turned out to be the most comforting element of all to Callie during that very difficult time. Though he startled her nearly to death on their first meeting by leaping down to her feet from a high bookshelf, after Aunt Mel’s funeral he was all purrs and cuddles, as though letting her know he shared her grief and they would work through it together.

He might also have been urging her to find out the truth of his former mistress’s death, which Callie had serious doubts about, early on. As she began looking into what might really have happened to her aunt, Jagger continued to back her up by offering…comfort. And isn’t that what every amateur detective in a cozy mystery is in need of after a stressful day? I’d say so.

As the past owner of several cats (at one point three at a time!), I’m totally aware of the comforting effects of cats. Of course, they can also have their downsides (we won’t mention the hair balls, furniture scratches, or litter box problems), but when they’re good, they can be very, very good. Whose blood pressure hasn’t lowered with a purring cat snuggled on their lap or can deny the pleasures of being greeted with joy at the front door after a long day? Never mind that the joyfulness leads pointedly to the food bowl. It’s still a lovely feeling and makes the cost of that high-end cat foot so worth it.

Jagger, though, acted beyond simple comfort. There were times when his acute hearing gave important alerts to Callie, as the murderer, aware of her closing in, became threatening. Far be it from me to spoil anything for readers, so let’s just say that having a cat in her house was definitely an important safety feature—and it helped me greatly in writing a suspenseful scene.

Another advantage of a cat in a mystery is that when your main character lives alone, there’s always someone to talk to, particularly while mulling over clues. Yes, the author can tell us what the character is thinking, but saying things out loud puts more life into the scene, to my mind. Especially if the cat responds in some way to important points that helps emphasize them. Dogs, of course, can be talked to as well, but they tend to interpret most of it as, “want to go for a walk?” and get all excited, whereas cats remain quiet and blink knowingly. That can be much more useful for reaching conclusions.

So cats, I believe, are a definite asset to a cozy mystery. In fact, I intend to keep Jagger around and healthy in the books that follow A Fatal Collection. I might also think about placing a cat in the rest of the collectibles shops in Keepsake Cove as well. Shake It Up! (collectible salt and pepper shakers), could have a Tuxedo,  Kids at Heart (vintage toys) might acquire an orange tabby, and The Collectible Cook could have, oh, let’s see, maybe a Siamese or a calico sitting in its window.

ROCCO: Absolutely, PURRRRR
Posted by ROCCO LOTEMPIO at 2:53 AM