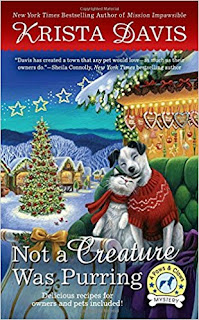 NOT A CREATURE WAS PURRING
KRISTA DAVIS

Inspired by her German heritage, Holly’s grandmother has arranged for Wagtail to have a Christkindl Market packed with goodies and decorations for the howliday tourists. But Holly’s mood takes an unseasonable turn when she learns that her old flame and childhood friend Holmes Richardson has brought his fiancée home—and she’ll be staying at the Sugar Maple Inn…

A love triangle becomes the last thing on Holly’s mind when her Jack Russell Trixie’s nose for trouble leads her to the corpse of a pet clothing tycoon. Now Holly and her dedicated detectives—Trixie and Twinkletoes the cat—must sniff out the killer to keep Christmas from going to the dogs…

ROCCO SEZ:  This series is delightful and charming and Berkley had better keep it going!  Love the adventures of Holly and her gang and this holiday tale (tail???) more than fills the bill.   Fans of the series will love the love triangle, and the mystery is pretty good too!  Top Pick! Five Paws!!!!!!! 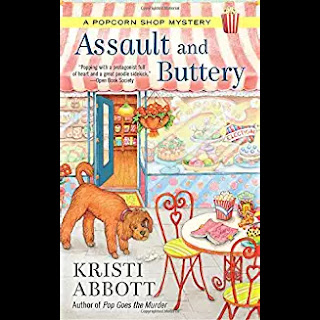 Repairs are under way at Rebecca Anderson’s gourmet popcorn shop. With production of her tasty treats on hold, Rebecca has plenty of time to read the old diary she discovered hidden in the shop’s walls. It’s a fun peek into her town’s history…until the diary’s abrupt ending leaves Rebecca wondering whether she’s actually stumbled upon a cold case.
Unfortunately for Rebecca, mysteries are popping up right and left. When local busybody Lloyd McLaughlin is found dead, the police suspect he was poisoned by Rebecca’s popcorn. But Rebecca has only made one batch of popcorn recently, and it wasn’t intended for Lloyd. Nothing about Lloyd’s death makes sense—until Rebecca discovers a startling connection between the missing diary-writer and the murdered man.

ROCCO SEZ:  This is another charming series (even if the main pet is a poodle).  the characters are quirky and the plots well thought out.  This is another goodie that we hope to see more of! Rating: Four Paws! 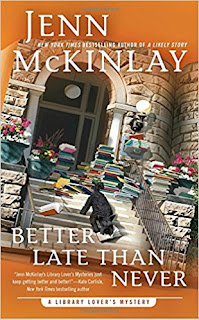 When the Briar Creek Public Library holds its first overdue book amnesty day—no fines for late returns—the volume of incoming materials is more than Lindsey and her staff can handle. But one tardy tome catches her attention—a copy of J. D. Salinger’s The Catcher in the Rye, twenty years past due.
When Lindsey looks up the borrower, she’s shocked to discover it was a murdered teacher named Candice Whitley, whose killer was never found. Candice checked out the novel on the day she died. Now Lindsey wonders if it could provide a clue to the decades-old cold case. No one noticed who brought the book back in, but could it be Candice’s killer? Lindsey is determined to catch the culprit one way or another, because justice for Candice Whitley is long overdue...

ROCCO SEZ:  This is a popular series and one can see why. The characters just seem to jump off the page. Longtime fans will not be disappointed, and folks new to the series give this a try!  Four and a half Paws! 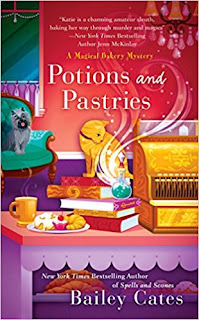 It’s been exactly two years since Katie and her aunt and uncle opened the Honeybee Bakery, where they serve delicious—and bespelled—treats to the good people of Savannah. After a dinner celebrating the bakery’s anniversary, they all take a stroll along the waterfront and meet Aunt Lucy’s friend Orla, a colorful character who has been telling the fortunes of locals and tourists alike for years.

The next day, Orla meets with what seems like a terrible accident, but Katie’s witchy intuition tells her it was something more sinister. Together with her trustworthy coven and her firefighter boyfriend, she’ll race to find out what happened to the unfortunate fortune-teller before the piping hot trail goes cold....

ROCCO sez:  Another great entry in the magical bakery series.  This time out Katie struggles to find out who did in the local fortuneteller!  Fans will love this clever  msytery!  Rating: Four and a half paws! 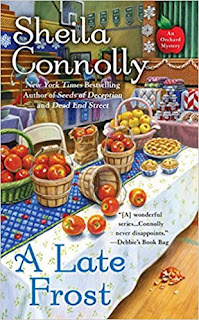 The usually quiet town of Granford, Massachusetts, is even drowsier during the colder months. But this year it’s in for a jolt when Monica Whitman moves into town. She’s a dynamo who wants to make friends fast in her new home, and she throws herself into community activities. Meg Corey, now Chapin after her marriage to Seth Chapin, is intrigued by the new arrival, who has already sold the town board on a new, fun way to bring in visitors during the off-season: WinterFare, which will feature local foods (such as Meg’s apples) and crafts, as well as entertainment.
Tragically, Monica falls ill and dies after the event in what looks like a case of food poisoning. When all the food served at WinterFare has been tested, including Meg’s apples, it becomes clear that there’s a more sinister explanation to the older woman’s sudden demise.

ROCCO sez:  Things sure get shaken up in town in this lively cozy!  the fast paced action will surely please fans of this long running series, which doens't show any indication of running out of steam!  Rocco's rating: Four paws! 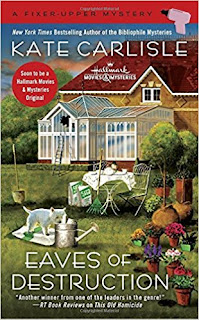 At the annual Victorian Home and Garden Tour, Lighthouse Cove, California’s premier contractor, Shannon Hammer, realizes that the competition is about to turn deadly....

Shannon is in high demand among rival homeowners, who will do anything to win Best in Show. One-upmanship and even espionage break out among neighbors, construction crews, decorators, and landscapers. Thanks to several new hires, Shannon is sure she can handle the extra load—until murder throws a wrench in the works.

The small town’s corrupt building inspector is found dead on one of Shannon’s jobsites, and soon plenty of suspects are coming out of the woodwork. When another body is discovered, Shannon calls on her team of close friends and devilishly astute thriller writer Mac to help her nail down the details and build a case against the killer before the door shuts on someone else—for good.

ROCCO sez:  This series should gain many more fans due to the Hallmark movies starring Jewel based on it!  This is another great installment in this stellar series!  Well plotted and even I couldnt' guess the ending!!!!! ROCCO's rating:  Five Paws!

The approach of Easter means a rush of business at TenHuis Chocolade, and Lee Woodyard and her aunt Nettie need all the help they can get to make their famous chocolate bunnies. Unfortunately, new hire Bunny Birdsong is a klutzy basket case. But to Lee’s surprise, she’s a wiz with computers and fixing the store’s website, so they decide to keep her.

However, Bunny receives a few visitors they could do without: Her soon-to-be ex-husband Beau, his wealthy aunt Abigail, and his new girlfriend and her brother all descend on the shop one day and have a bitter argument. Lee hopes they can find a peaceful way to settle their dispute, but when Abigail’s body is discovered in the vacant store next door, it’s clear to Lee there’s a bad egg in her midst. Now she’s on the hunt to find out who it is…

ROCCO SEZ:  Who doens't love a book that features chocolate, and when a tasty mystery is included, so much the better!  JoAnn still manages to keep this series fresh after sixteen books!  Longtime fans will love the quirky characters and this is a good way to get introduced to a great series!  PLus, chocolate trivia!  who could ask for more?????  Rocco's rating:  Four paws! 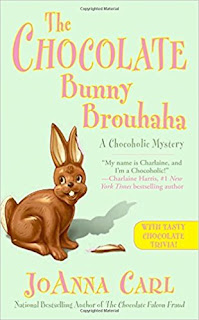 Leave your email address in our comments section to be entered to win ROCCO's review copy of THE CHOCOLATE BUNNY BROUHAHA!

For extra entries, you can do any or all of the below:

ROCCO reviews courtesy of Night Owl
Posted by ROCCO LOTEMPIO at 9:38 AM