Cat-ching up with Charlie Harris and Diesel!

In honor of thier latest release, I pay tribute to:

The Cat in the Stacks series by Miranda (aka Dean) James.

Set in the fictional town of Athena, Mississippi, the action centers around librarian Charlie Harris and his Maine Coon cat, Diesel.  Diesel is quite large for his size, but very lovable, and Charlie walks him on a leash and takes him pretty much everywhere he goes.  Unlike the cats in the “Magical Cats” series, Diesel is more of a sidekick for Charlie than an active participant in the mystery solving – although he does lend a paw from time to time.  The series has many charming characters, some of which have even been put into a spin-off series by James. 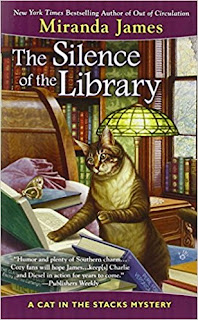 My favorite in the series so far is THE SILENCE OF THE LIBRARY, which revolves around a library exhibit to honor YA novelists – in particular, one octogenarian, Electra Barnes Cartwright, the author of the beloved “Veronica Thane” series.  Once news of the author’s appearance goes viral, another rumor surfaces – that of five unpublished manuscripts – drawing out one rabid fan who will stop at nothing short of murder to get hold of the rare books.  Series book devotees will find the references and facts about actual series books interspersed throughout the book interesting, and it adds to the mystery.

their latest adventure, out February 20, is called CLAWS FOR CONCERN.  Here's the back cover blurb from Amazon: 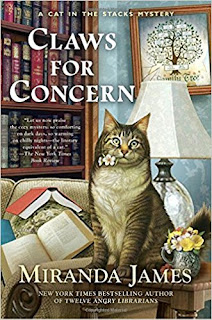 Charlie Harris and his Maine Coon cat, Diesel, are embroiled in a new mystery when a cold case suddenly heats up in the latest installment of the New York Times bestselling series.
Charlie Harris is busy enjoying his new grandson when a mysterious man with a connection to Charlie's family starts visiting the library, bringing with him troubling questions about an unsolved murder...Charlie may be a proud new grandfather, but he and Diesel still have work to do at Athena College and the small Mississippi town's public library. He's too busy to deal with true-crime writer Jack Pemberton, who wants Charlie as the subject of his latest book--and who won't take no for an answer.  A more appealing proposition for Charlie is spending time helping a kind, elderly man navigate the library's genealogical database. But he's shocked when he learns that the visitor's search is focused on a member of his own family: his late aunt's husband.Charlie befriends the man and considers inviting him to stay in his home, but he's soon given reason to question that notion. Jack is certain that Charlie's new houseguest was involved in a shocking homicide that took place years ago in a small town near Athena. As this cold case heats up, Charlie and Diesel have to uncover a killer who may already be too close to home...

It's always a treat to watch Charlie and Diesel investigate and even though I did guess the killer's identity early on, it didn't spoil my enjoyment of this book.  I liked the character of Jack Pemberton.  Could another spin off series be in the works???????/

Here's to Charlie and Diesel entertaining us for many more adventures to come!

You can win ROCCO's hardback review copy of Claws for Concern!  Just leave your name and email address in our comments section and tell us your favorite "Cat in the STacks" mystery!  Entries without an email address will be disqualified, sorry. Contest ends midnight, February 23.