Help us celebrate the release of DEATH BY A WHISKER!

Merow!  As many of you know, the Human's second entry in the Pet Rescue series, DEATH BY A WHISKER, came out on February 13th!  reviews so far have been good, so thanks to all who posted a review on Amazon and/or Barnes and Noble, GoodReads, and any other review site!

Here's the synopsis from the inside cover:

Getting used to life back home in Deer Park, North Carolina, Sydney McCall and her right-hand tabby, Toby, are helping her sister Kat run the local animal shelter. Syd and Kat are all excited about the prospect of the shelter’s newest fundraiser: shopping channel queen Ulla Townsend. Shelter admin Maggie Shayne vehemently refuses to have anything to do with the woman, but the fundraiser ensues as planned. That is, until Ulla turns up dead in the middle of the event.The cause of death is determined to be an allergic reaction, but Syd and Toby are sniffing out something fishy. When Syd met Ulla, it was clear she was distasteful and rude. And right before the event, Syd spotted some behind-the-scenes drama between Ulla and her manager. As they begin to investigate, they realize there is no shortage of suspects, and Maggie is at the top of the list.Now Syd and Toby must claw their way to the truth before everything goes paws up at their animal shelter in Death by a Whisker by national bestselling author T. C. LoTempio.

Good reviews spark sales, and we all know it's sales that determine the life of a series.....

With that in mind, we're going to raffle off not only a hardback, autographed copy of DEATH BY A WHISKER, but also one of the first in the series, PURR M FOR MURDER!  the only requirement to the winner is that they post an honest review on Amazon and Barnes and Noble and GoodReads!

It's easy to enter - just leave your name and email addy in our comments section!  If you want, you can also tell us which cover art you prefer. (My personal favorite is PURR) We'll use random.org to select the winner! Contest closes midnight, March 3! 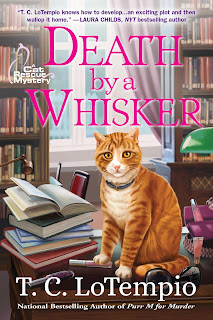 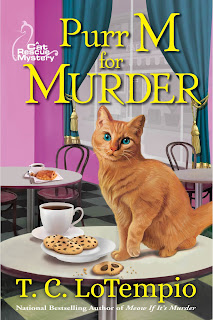 Posted by ROCCO LOTEMPIO at 7:24 AM