Ma-row!
Here are my cozy reviews for September! 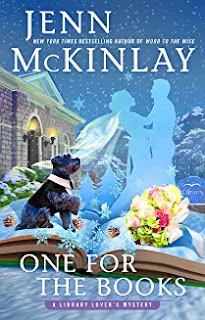 Love is in the air in Briar Creek as library director Lindsey Norris and boat captain Mike (Sully) Sullivan are finally tying the knot. The entire town is excited for the happy day, and Lindsey and Sully's plan for a small wedding evaporates as more and more people insist upon attending the event of the year.
When Lindsey and her crafternoon pals head out to Bell Island to see if it can accommodate the ever-expanding guest list, they are horrified to discover a body washed up on the rocky shore. Even worse, Lindsey recognizes the man as the justice of the peace who was supposed to officiate her wedding ceremony. When it becomes clear he was murdered, Lindsey can't help but wonder if it had to do with the wedding. Now she has to book it to solve the mystery before it ends her happily ever after before it's even begun....

I am a big fan of this series and of Lindsey Norris! She gets better with each adventure!  So happy that they finally made it to the altar!!!!!!  Even if you have not read the others (I haven't read them all either) it's easy to pick up.  five paws!!!!! 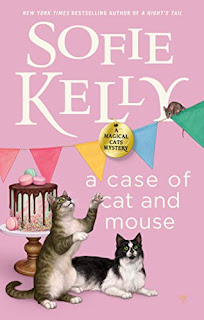 A reality TV crew has come to town and brought librarian Kathleen Paulson and her two magical cats more than their fair share of real-life drama, in the newest installment of this New York Times bestselling series.
Spring has come to charming Mayville Heights, and with it, some Hollywood glamour. The little town is abuzz because the reboot of a popular baking TV show is filming there. Librarian Kathleen Paulson is working as an advisor on historical facts for the show, local restaurants are providing catering for the camera crews, and Kathleen's faithful felines, Hercules and Owen, are hoping there is a cat treat challenge.
But then Kathleen finds one of the judges dead. She has solved many-a-murder with help from the supernaturally gifted Herc and Owen, and with the whole town on tenterhooks, the talented trio will have to have all paws on deck to chase down this killer. 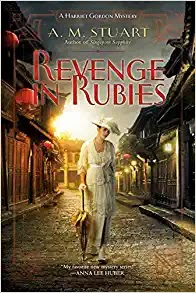 this is the second in the Harriet Gordon series. The series is set in 1910 and features Harriet Gordon as a sort of Jessica Fletcher, aided by inspector Robert Curran. to be honest I'm not much on period pieces but t his one  is definitely worth a look! four paws. 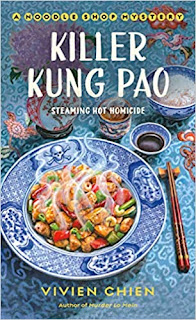 Is life at the Ho-Lee Noodle House becoming too hot to handle?
Lana Lee’s plate is already plenty full. Running her family’s Chinese restaurant in Cleveland’s Asia Village is challenging on the best of days. But just when Lana thinks she might be able to catch her breath before the weekend―which she’s eager to spend with her equally overworked boyfriend, Detective Adam Trudeau―Lana witnesses a car accident in the parking lot. And now she has no choice but to get involved.
June Yi, of Yi’s Tea and Bakery, is a serious businesswoman well-known for her heartlessness. But June meets her match when she rear-ends the Cadillac belonging to Mah Jong lover Mildred “Millie” Mao. As each woman curses―and threatens―the other, it becomes clear to Lana that trouble lies ahead. Still, who could have imagined that Millie would end up dead at the beauty salon? The evidence suggests that she was electrocuted while having a foot bath, and all eyes are on June. Can Lana find a way to solve this case before another fatality occurs in Asia Village?

We love Chinese food and we love this series!  Lana Lee is sassy and nosy, just the type of person you'd want investigating a murder!  Can't wait for the next one, and we wish Vivien Chien all the best.  Five Paws. 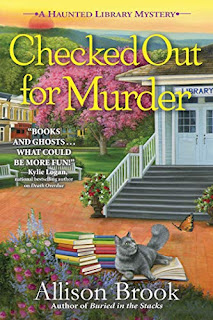 Daphne Marriott strolls into Clover Ridge and informs librarian Carrie Singleton that she's a psychic. But had she foreseen what fate awaited her, Daphne would have steered clear of the quaint Connecticut town. Evelyn, the library ghost, tells Carrie that there's more to Daphne than she lets on.
The mysterious woman grew up in Clover Ridge with her no-good dad, who apparently met his end at the hands of Daphne's brother, Billy. Still, Daphne proves a welcome distraction when Carrie's overbearing mother hits town. Mom's much younger husband, Tom, is in a movie that's lensing locally, and she's there to keep an eye on him: Tom's costar, sultry Ilana Reingold, is also his ex-fiancée, and there's no denying the chemistry is still there. Soon after mingling with the moviemakers at a meet-and-greet, Daphne is found dead.
Carrie and Evelyn investigate, assisted by bushy-tailed library cat Smoky Joe. But the suspect list could overflow the library shelves. Has Billy killed another relative? Is their long-missing mother involved? Or Daphne's mean ex-husband? Carrie's sure she knows who committed the crime, but can she bind together the clues before the culprit Dewey-decimates the town? Four paws!!!!

Want to win one of ROCCO's review copies?  Leave your name and email address in our comments section!  Brother Maxx will select one name at random to win one of these books!  Contest ends midnight, September 18th.  US entries only please.  :)  Entries without an email addy will be disqualified.
Posted by ROCCO LOTEMPIO at 1:58 PM