ROCCO REVIEWS.....MURDER IN SEASON - A MURDER SHE WROTE MYSTERY 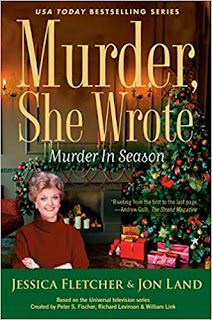 MURDER IN SEASON
A MURDER SHE WROTE MYSTERY
JESSICA FLETCHER AND JON LAND
BERKLEY, HARDCOVER
RELEASE DATE: NOVEMBER 24, 2020
FIVE PAWS!!!!!
Christmas has come to Cabot Cove, but a peaceful holiday season is not in the cards after Jessica Fletcher is pulled into a centuries-old mystery in the latest entry in this USA Today bestselling series.With work on the reconstruction of her beloved home almost complete, Jessica Fletcher is in high holiday spirits, spearheading the annual Christmas parade and preparing for her nephew Grady and his family to come to town. The only thing dampening the holiday cheer is the discovery of two sets of bones on Jessica’s property: one set ancient, the other only about a year old. It’s concluded that they were both placed there during the reconstruction, and Jessica suspects that, despite the centuries between them, the remains might be connected. Soon tabloid reporter Tad Hollenbeck arrives in Cabot Cove to write a story about what he calls “the murder capital of the country.” But when Tad himself is murdered, Jessica speculates that his arrival, his death, and the discovery of the bones are all somehow linked.As Jessica digs deeper to find the connection between the bones and Tad’s murder, everything seems to come back to a mystery that has long plagued Cabot Cove. If she wants to solve the case, she’ll need to delve into her beloved town’s dark history, or else this holiday season may be her last....
'Holidays can be murder, I tell you!"  Seth Hazlett delivers the opening line in this latest Murder She Wrote mystery, a line we often find all too true, although not for the same reasons as Jessica.
Once again, Jon Land comes through with a deliciously intricate mystery for America's favorite sleuth to solve.  I've enjoyed watching Jessica evolve through the last few books, her mysteries more thriller than cozy and reminiscent of the final seasons of MURDER SHE WROTE.  Land weaves a good tale, and the characters are as lively and in some cases as stodgy as ever (although I still feel there is just a tad too much bickering between Jessica and Mort!)  Fans of the series will love this.   A good read on a chilly afternoon (or any afternoon or evening, really.)   Five paws!!!!!! MURDER IN SEASON debuts Tuesday!  Get your copy now!
Note:  It is our understanding this is Land's last entry in this series.  You'll be missed, Jon!
Posted by ROCCO LOTEMPIO at 8:58 AM