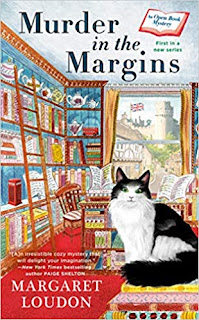 The plot thickens for American gothic writer Penelope Parish when a murder near her quaint British bookshop reveals a novel's worth of killer characters.Penelope Parish has hit a streak of bad luck, including a severe case of writer's block that is threatening her sophomore book. Hoping a writer in residence position at The Open Book bookstore in Upper Chumley-on-Stoke, England, will shake the cobwebs loose, Pen, as she's affectionately known, packs her typewriter and heads across the pond.Unfortunately, life in Chumley is far from quiet and when the chairwoman of the local Worthington Fest is found dead, fingers are pointed at Charlotte Davenport, an American romance novelist and the future Duchess of Worthington. Charlotte turns to the one person who might be her ally for help: fellow American Pen. Teaming up with bookstore owner Mabel Morris and her new friend Figgy, Pen sets out to learn the truth and find the tricks that will help her finish her novel.

Gothic mysteries, a fledgling writer/sleuth, a cozy bookstore with the requisite cat....all an auspicious start for this promising new series!  Penelope is easy to like and the mystery was well crafted. 4 and a half paws!!!!!! 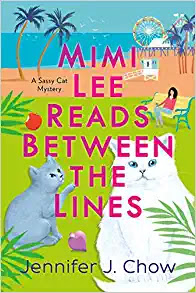 When a local teacher is found dead, LA’s newest pet groomer Mimi Lee finds herself in a pawful predicament—with her younger sister’s livelihood on the line.
Mimi Lee is on top of the world. She has a thriving pet grooming business, the sweetest boyfriend, and a talking cat to boot. When she arrives at the elementary school where her sister Alice works, she's expecting a fun girls' night out—but instead finds a teacher slumped over in her car, dead.Alice was the last one to see Helen Reed, which instantly marks her as the prime suspect. Unable to sit quietly and let the authorities walk all over her sister, Mimi starts snooping and talks to Helen’s closest contacts, including one jumpy principal, a two-faced fiancé, and three sketchy teachers. With the help of her sassy but savvy cat, Marshmallow, and a cute kitten named Nimbus, the clock’s ticking for Mimi to get to the bottom of yet another case before her sister gets schooled.

Mimi Lee and Marshmallow are back!  We enjoyed the previous mystery, MIMI LEE GETS A CLUE, so was eager to read the next.  This entry is another good one, especially for those of us who love cats (and especially talking ones!!!!!!)  Mimi Lee is an engaging heroine/sleuth and Marshmallow is the perfect compliment (as a matter of fact they remind me of another crime solving duo...can you guess which one????? Hint:  they share names with a popular husband and wife sleuth team). 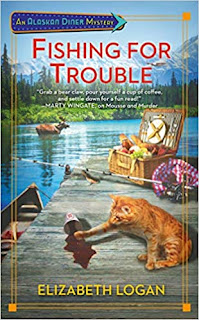 Something fishy is going on at a local seafood processing plant, and Charlie Cooke is on the hook to solve the case in this new Alaskan Diner Mystery.Summer has come to Elkview, Alaska, bringing twenty hours of sunlight every day, not to mention a surge of tourists and seasonal workers. Chef Charlie Cooke is eager for a busy yet relaxing season, but when a young man working a summer job at the local fish processing plant dies moments after walking into the Bear Claw Diner, she’s quickly swept into the investigation.Soon, through her best friend Annie Jensen, Charlie learns that another student worker at J and M Processing has disappeared, leaving more questions and fewer answers. The near-endless sunlight gives plenty of time to search for clues, but Charlie will have to work with Annie and local reporter Chris Doucette to net the killer before anyone else gets hurt.

This is a charming cozy series with a unique background.  Elizabeth Logan makes you want to visit the Bear Claw Diner and help solve the mystery!  A good plot with a cast of colorful characters.  Four paws. 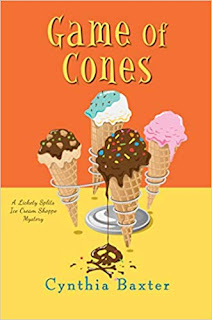 in Cynthia Baxter's fourth Lickety Splits Mystery, ice cream shoppe owner and amateur sleuth Kate McKAy doesn't waffle around scooping up new clientele at a historic hotel, but her hopes of becoming the Hudson Valley's reigning ice cream queen melt fast when murder checks-in!From the moment Kate arrives at the imposing Mohawk Mountain Resort, not even luggage brimming with hot fudge can sweeten her stay. Instead of savoring alone time with her on-again boyfriend Jake and leading workshops on whipping together delectable frosty treats, she finds herself stranded at the isolated hotel with a small group of nutty characters--and a dead body.When the corpse of wealthy cosmetics executive Bethany La Montaigne is suddenly found following a blackout, any of the five strangers trapped with Kate and Jake could be the killer. Chilled to the core, Kate vows to discover whether the victim's mortal enemy was a smooth-talking playboy, bubbly millennial, mousy librarian, charming Englishman, or the Mohawk's creepy general manager...Bethany's life was chock full of scandals and there's little doubt that someone refused to endure another taste. With just a sprinkling of clues, it's up to Kate to bring justice to a culprit who believes that revenge is a dish best served cold...

A well plotted  mystery that moves along at a steady pace.  Recommended for those who like cozies and ice cream! (two of our favorites) 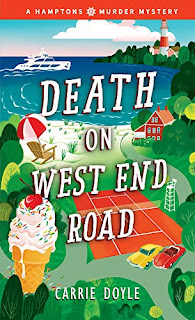 There are two things Hamptons innkeeper and sleuth Antonia Bingham can't resist―carbs and an unsolved murder!

Despite a busy high-season schedule and an inn booked to capacity, Antonia has agreed to investigate a cold case in her beloved adopted hometown, East Hampton, NY: the killing of Susie Whitaker, whose brutal 1990 slaying on a tennis court in the poshest part of town was never solved.

And the person who has hired Antonia? Prime suspect Pauline Framingham, a manipulative pharmaceutical heiress from a powerful family. As Antonia attempts to unravel the mysteries of the past she unearths even darker secrets and ultimately wonders if it would have been best to let sleeping dogs lie. To make matters worse, past acquaintances and love interests reappear in the Hamptons, disrupting Antonia's world and causing her to scurry to the fridge for comfort.

An entertaining mystery with quirky characters that keeps you guessing to the end!  Four Paws!!

To enter: Leave your name and email address in our comments section!  You MUST enclose your email address to be considered.  US entries only, please.

Winner will be chosen at random by MAXX!!!!!  Contest ends midnight, November 27.

Posted by ROCCO LOTEMPIO at 8:42 AM