Meow! My guest today is author and blogger Debbie DeLouise! 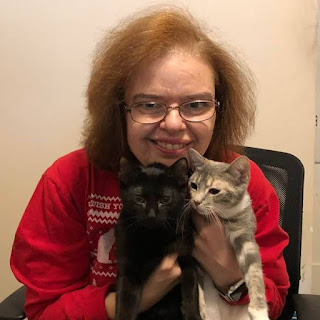 Debbie De Louise is an award-winning author and a reference librarian at a public library on Long Island. She is a member of Sisters-in-Crime, International Thriller Writers, the Long Island Authors Group, and the Cat Writers’ Association. Her novels include the five books and three stories of the Cobble Cove cozy mystery series, a comedy novella, When Jack Trumps Ace, a paranormal romance, Cloudy Rainbow, and the standalone mysteries; Reason to Die, Sea Scope, and Memory Makers. Her latest book, Pet Posts: The Cat Chats is a non-fiction pet book. She lives on Long Island with her husband, daughter, and three cats. 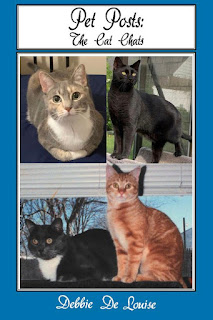 R:  Tell us about your latest release

R: What genre do you generally write and have you considered other genres?

4.     I write mostly mysteries, both cozies and traditional ones, but I’ve dabbled in several other genres – romance, science fiction, horror, fantasy, and now non-fiction.

R: What have you had published to-date? Do you have a favourite of your books or characters?

5.     I’ve published 10 full-length books, 5 of them are part of my Cobble Cove cozy mystery series, and a dozen or so short eBooks along with short stories in anthologies, and pet articles for online and print magazines. All my published works are listed on my website: https://debbiedelouise.com. Most of them are available as paperbacks and eBooks. The eBooks are free on Kindle Unlimited and only available through Amazon.com. I also have two books in audio, large type, and hardcover. My award-winning psychological mystery, Sea Scope, is also translated in Spanish.

6.     I’ve just signed a contract with Next Chapter Publishing for a time-travel thriller called Time’s Relative that should be released this spring.  KittyKai’s Easter Mystery, another short Cobble Cove cozy mystery eBook for Solstice Publishing that has an Easter theme, will be released March 5th. 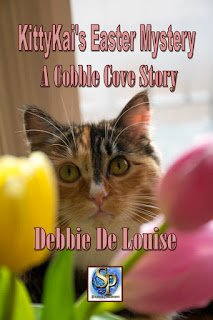 7.     I’m mostly a pantster, but I try to plot a little. When I do, I tend to deviate from any outlines I create as my characters take over and lead the way.

8.     No party tricks unless you call pulling my cats out of boxes – lol. I have been exercising to walking videos regularly and outdoors when the weather permits. I love to read, but I don’t have much time to do it while I’m writing. I also enjoy playing with my cats.

9.     I listed my website earlier. It’s https://debbiedelouise.com. I’m in the process of redesigning it. It also features my blog and newsletter sign up.

My cat character, Sneaky, from my Cobble Cove mysteries also has his own blog where he interviews pet characters from other mysteries and also hosts a column by my two real life cats. His blog can be found here: Sneaky the Library Cat’s blog: https://Sneakylibrarycat.wordpress.com

My other social media links are:

R: You have also written several other books—tell us a bit about those. –

In my latest book of the series, No Gravestone Unturned, published in October, Sneaky is aided by two other cats in helping Alicia solve a murder in the Cobble Cove graveyard. While Sneaky has been a silent cat in previous books and only leading Alicia to clues and helping her like a regular cat, in the two eBook stories following the 4th full-length book, Sneaky’s Christmas Mystery (the Cat Writers’ Association’s MUSE medallion winner) and Sneaky’s Summer Mystery, the readers became aware of Sneaky’s thoughts and that of the other pet characters in the series.

This past summer, I also published a medical thriller, Memory Makers, about a woman who volunteers for a clinical trial of a new memory drug hoping to recall the face of the man who kidnapped her and her sister as children and murdered her sister.

All my books usually include cats, if not in big roles, then in subplots. I sometimes feature other pets, too. There are two dogs in my Cobble Cove series, and I even feature a parrot in my thriller, Reason to Die, about the murders of handicapped people in a small town in Connecticut.

Debbie will acknowledge one lucky commenter in one of her next books and send that commenter a free copy of that book in eBook form when it’s published this spring.

To enter, leave your e-mail address along with a comment with your full name and choose one of the below titles that you would most like to read: