Jon Land, one of our favorite authors, has a new release! 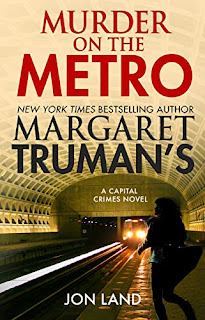 n Margaret Truman's Murder on the Metro, Jon Land's first thrilling addition to the New York Times bestselling Capital Crimes series, Robert Brixton uncovers a sinister plot threatening millions of American lives!
"A roller coaster of a novel." —David Baldacci, New York Times bestselling authorIsrael: A drone-based terrorist attack kills dozens on a sun-splashed beach in Caesarea.Washington: America awakens to the shattering news that Vice President Stephanie Davenport has died of an apparent heart attack.That same morning, a chance encounter on the Washington Metro results in international private investigator Robert Brixton thwarting an attempted terrorist bombing. Brixton has no reason to suspect that the three incidents have anything in common, until he’s contacted by Kendra Rendine, the Secret Service agent who headed up the vice president’s security detail. Rendine is convinced the vice president was murdered and needs Brixton’s investigative expertise to find out why.In Israel, meanwhile, legendary anti-terrorist fighter Lia Ganz launches her own crusade against the perpetrators of that attack which nearly claimed the lives of her and granddaughter. Ganz’s trail will ultimately take her to Washington where she joins forces with Brixton to uncover an impossible link between the deadly attack on Caesarea and the attempted Metro bombing, as well as the death of the vice president.The connection lies in the highest corridors of power in Washington where a deadly plot with unimaginable consequences has been hatched. With the clock ticking toward doomsday, Brixton and Ganz race against time to save millions of American lives who will otherwise become collateral damage to a conspiracy destined to change the United States forever."Margaret Truman’s Murder in the Metro is a spectacular international thriller of intrigue and conspiracy that I could . . . not . . . put . . . down." —Mark Greaney, New York Times bestselling author

We have to agree with the above reviews!  Land has once again crafted a spectacular thriller that will please fans of this series and keep readers on the edge of their seats!  A five paw read!!!!!!!!!

Jon Land is the USA Today bestselling author of more than fifty books, over ten of which feature Texas Ranger Caitlin Strong. The critically acclaimed series has won more than a dozen awards, including the 2019 International Book Award for Best Thriller for Strong as Steel. He is also the author of Chasing the Dragon, a detailed account of the War on Drugs written with one of the most celebrated DEA agents of all time. A graduate of Brown University, Land lives in Providence, Rhode Island and received the 2019 Rhode Island Authors Legacy Award for his lifetime of literary achievements.

If you won a million dollars, what's the first thing you would do?

Wow, that’s actually a tough one. I think I’d just pay off all my debts. What a feeling that would be! I’m not a traveler, I don’t play golf, I just don’t have expensive tastes. It’s a blessing to enjoy the simplest things the most, a blessing when the things you enjoy the most don’t cost a lot.

What movie could you watch over and over?

It’s a tie between JAWS and THE GODFATHER. Every time I’m flipping through channels and I come to one of those I start watching and then I can’t stop. Same thing with the Sean Connery Bond movies. And THE USUAL SUSPECTS which for me is the best screenplay of this generation. Interestingly, I remember as a kid watching AIRPORT starring Burt Lancaster, that takes place during a snow storm, during a snow storm. Now, whenever it snows, I have this urge to watch it again which I did just a few weeks ago after I finally bought the digital version from my cable company. Go figure.

Do you have a favorite movie quote and if so, what is it?

I have a million! But at the very top of that list is from CASABLANCA when Claude Rains playing the cop speaks to the just arriving Nazi soldiers after Bogie shoots the Gestapo said: “Major Strasser has been shot!...Round up the usual suspects.” It’s flat-out perfect.

What is your favorite part of the day?

I don’t have one. Different parts of the day represent different things for me, but I guess I’d go with evenings because there are less emails and no phone calls to distract me from working or anything else. Yup, evenings because that’s I have time all to myself and now, because Trump’s gone, I’m not chained to MSNBC anymore for my nightly therapy. Rachel Maddow should send me a bill for all the therapy she provided for those four impossible years with that lumbering piece of _______ in the White House.

If you could talk to any author, living or dead, who would it be and what question would you ask them?

Well, as you know thanks to my association with the International Thriller Writers, many of my favorite authors are also very close friends, like R.L. Stine, Lee Child, David Morrell, James Rollins, Sandra Brown—too many to name. So I’d go with Stephen King who’s my absolute favorite author because I’ve been reading him for so long and he’s still at the top of this game. I don’t have a specific question I’d ask him—I just want to have a conversation. People always compliment me on the depth and breadth of my imagination. But compared to Stephen King, I’m a first grader.

Thank you Jon!!!!!  Folks if you are in the mood for a thrill ride, pick up a copy of Murder on the Metro today!

Jon will send a copy of MURDER ON THE METRO to one lucky commenter. to enter, leave your name and email address in our comments section.  US entries only, please!  Contest ends Feb. 20th.