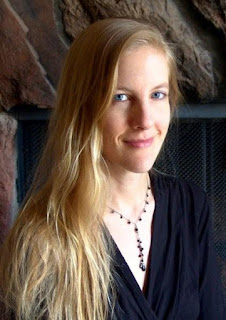 My guest today is the incredibly talented author of the Kitty Norville Series, CARRIE VAUGHN!
Carrie Vaughn is the bestselling author of a series of novels about a werewolf named Kitty. Kitty Steals the Show, the tenth installment, is due out July 31,2012. (that's next Tuesday - Wow!) She has also written for young adults (Voices of Dragons, Steel) and two stand-alone fantasy novels, Discord's Apple and After the Golden Age. Her short fiction has appeared in many magazines and anthologies, and she’s a graduate of the Odyssey Fantasy Writing Workshop. She lives in Colorado with a fluffy attack dog. (DOG!!! NOT ATTACK CAT????)Learn more at carrievaughn.com.

And now, here’s Carrie!
R: Hello and welcome Carrie!
C: Thanks Rocco!
R: Ever get interviewed by a cat?
C:  No, but considering what I write about, it’s not unusual J
R: And I love your main character is named Kitty J
R: Tell us a bit about yourself, and how you became interested in writing?
C: I'm an Air Force brat, grew up all over the country.  Went to college, worked in a bookstore and as an administrative assistant before quitting to write full time.  I travel quite a bit and love seeing the world.
I've always written.  I was eight years old when I wrote my first story, "Sally the Horse," a feminist retelling of The Black Stallion.  Sort of…  I've always loved stories and have a huge imagination.  As I kid I was constantly daydreaming, and writing was the way I made use of those daydreams.  By the time I got to college, I didn't want to do anything but write.  Fortunately, my immediate family was supportive, and I was able to chase that dream.
R: What drew you to the paranormal genre?
C: I had an idea for a story that happened to fit in the paranormal genre.  I tell people, I didn't pick paranormal, it picked me.
R: What inspired you to create the character of Kitty?
C: I realized that if there really were vampires and werewolves in the real modern world, self-help gurus like Dr. Laura and Dr. Phil wouldn't be able to help them with their problems, and they would need their own self-help radio show.  I needed a host for the show, and I decided she'd be more convincing if she was supernatural herself rather than human.  I wasn't interested in writing about a vampire; on the other hand, werewolves had been neglected and I thought I could do something interesting with them, so I made her a werewolf, and named her Kitty, because of course.
R: What writers in the paranormal genre would you say have made the greatest influence on your writing?
C: This is a bit embarrassing, but I don't read very much in paranormal.  I have my own take on it, so I tend to stay away from other paranormal books and concentrate on writing the stories I want to write, rather than trying to fit them to a pre-existing idea of what paranormal ought to be like.  That said, I'm influenced by all kinds of classic fantasy and horror writing that served as precursors to modern paranormal.  I love Ray Bradbury's dark short stories, such as those in The October Country, and Victorian horror writer Arthur Machen has stories that would be at home in the modern urban fantasy category.  They're very strange, and I love that.
R: Which of Kitty’s adventures was the most fun for you to write? Were any of them the least amount of fun?
C: Every book has sections that are fun, and sections that are really difficult.  It's hard to point to a specific book as being easier or harder than any other, since each of them has particular charms and challenges.
R: If you weren’t a writer, what would you be doing?
C: institutionalized, probably.
R: What advice would you give new writers just starting out?
C: Write all the time.  Read as much as you can.  Learn from what you read, apply it to what you write.
R: What’s the craziest thing you’ve ever done?
C: Some people would say, try to make a living as a writer…  I don't actually know.  Ride horses, scuba dive?  I don't consider those crazy, but some people would.  I try to have adventures, but not particularly crazy ones.
R: What one thing would your readers be surprised to learn about you?
C: I always have a tough time with this question!  People are often surprised to learn how much of a science fiction nerd I am.  I love Star Wars, Star Trek, Firefly, etc.  I have comic books, watch the old GI Joe cartoon.  I love steampunk and make costumes.
R: What new adventures are in store for Kitty and company in the future?  What can we look forward to?
C: The tenth Kitty novel, KITTY STEALS THE SHOW, is due out this summer.  After that is KITTY ROCKS THE HOUSE, and I'm working on the next couple of novels after that.  I'm also pretty much always working on short stories for various anthologies.  So lots more adventures are in store.  Stay tuned!
R: Sounds great, Carrie, and now a little thing BIG ROCK calls…
Just for Fun:
Night or Day?  Day.  I'm a child of the sun.
Dog or Cat? (answer carefully)  I have a dog, I'm sorry.  My brother was horrifically allergic to cats when we were growing up, so I've never spent much time around cats.  It's a personal failing, I know. (Meow…well, since your main character’s named Kitty, I’ll forgive you. J)
Beach or Pool?   Beach.
Werewolf or Werejaguar?  Werewolf, of course.
Steak or salad?  Both?
Favorite Drink?  Nice red wine.
Favorite Book?  The Blue Sword by Robin McKinley.
Favorite TV Series?  Right this minute, Castle.
Favorite Movie?  Tough one, but I've probably watched Star Wars more than any other.
Finish this sentence:  If I had just one wish, it would be __world peace.  Seriously.______________

Thank you for a fabulous interview, Carrie!
To keep up with the latest on what Carrie’s doing and new releases, check out http://www.carrievaughn.com/ 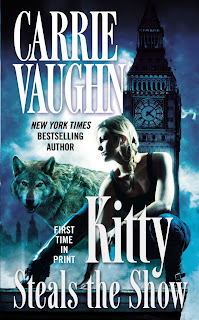 Now, Carrie is giving away a copy of  KITTY STEALS THE SHOW, plus an accompanying music CD,  to one lucky reader! You know the drill to enter.  All you have to do is leave a comment with your email address.  Winner will be chosen using random.org.  To get extra entries you can:

Be sure to list all you do in your post.  Contest open to US residents only, ends midnight July 29, winner chosen using random.org, announced July 30!
AND DO NOT FORGET OUR CASTLE/AUTHOR FUNDRAISER FOR KIDS NEED TO READ!

This is the link to Prize Pack #2- our Author Assortment of books, many autographed:
CASTLE/KNTR CHARITY AUCTION PRIZE PACK #2 - AUTHOR ASSORTMENT

Coming soon: Our own “interview with the vampire” Sarah Dearly sits in my hotseat (courtesy of Michelle Rowen!)
Posted by ROCCO LOTEMPIO at 2:28 AM