SARAH DEARLY DISHES IN MY HOTSEAT! (Courtesy of Michelle Rowen) 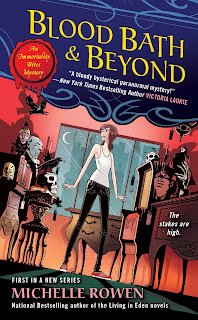 MEOW! Today marks the debut of paranormal  mystery BLOOD BATH AND BEYOND, a continuation of the adventures of fledgling vampire Sarah Dearly and her beloved, the vampire Thierry! HAPPY RELEASE DAY!

For those of you not familiar, Sarah's adventures were previously chronicled in much detail by our friend author Michelle Rowen, in the IMMORTALITY BITES paranormal romance series (Bitten and Smitten, Fanged and Fabulous, Lady and the Vamp, Stakes and Stilettos, Tall Dark and Fangsome).  Now Sarah is back, sinking her fangs into paranormal mysteries!  The MMPB from Penguin makes its debut in bookstores today, August 7, and I invited Sarah over to  my blog to dish on what she's been up to, her life since becoming a vampire, and (of course) Thierry and The Ring!

S: Thanks, Rocco. Glad to be here.

S:            Actually, I most certainly am not undead. I am very much alive. This is one of the most common myths about vampires, actually, that we’re the walking dead. No way. Heartbeats, blood pressure, breathing – check, check, and check. We might not be human, per se, but we’re definitely alive. Now... what was my first thought upon realizing that I was a vampire and it wasn’t just a bad dream? I think it was along the lines of: “Oh $#%*!”
R:            What’s one of the biggest perks of being a vampire?  One of the biggest drawbacks?
S:            Biggest perk – I get to stay 28 forever, which is a great age. Biggest drawback – no reflection. Some might say the vampire hunters who want to end my newly immortal life, or the life of any vampire, but nah. It’s the mirrors. It’s just so incredibly inconvenient, you have no idea.
R:            What advice would you give a fledgling vampire?
S:            Stay away from vampire hunters. And mirrors.
R:            What was the hardest adjustment for you to make when you began your new lifestyle?
S:           Let’s face it, drinking blood is not the most natural thing to do. Even as a fledgling. I had some iffy moments when it came to the red stuff. Because...gross. But also, yum. It’s so bizarre, you have no idea.
R:            Can you tell us what’s ahead for you now that Thierry has joined “The Ring”?  How do you see this affecting your lives?
S:           The Ring is essentially the shadowy and mysterious council that governs vampiric law worldwide. Thierry was the one who founded it more than a century ago, but left for personal reasons. Their number one priority is to keep the existence of vampires a secret from humans. They recently recruited Thierry to be a consultant for them, which is a pretty way of saying he’s an investigator. He’s sent out on assignments here and there and he has to get to the bottom of vampire-related problems swiftly and efficiently. And I get to go along as his assistant because I think we’ll make a seriously kickass team – me the sassy fledgling and him the often dour, sometimes scary master vamp. How will it affect our lives? Well, I can promise that there will be mega travel, a great deal of danger, and an extra helping of paranormal intrigue and kooky characters we’ll meet along the way, that’s for sure.
R:            If you could meet any famous vampire from fiction, who would it be and why?
S:             I still have a bit of a thing for Angel from Buffy the Vampire Slayer. I like ‘em angsty and mysterious.
R:            What would you change about Thierry, if you could?
S:            If there’s one thing that bugs me about him it’s how secretive he is about his past. If he doesn’t want to share something he totally clams up – as if I might not be able to handle the truth. I have this crazy feeling like this might cause some problems in the future. Hmm. Could be.
R:            What would Thierry change about you?
S:            Likely, that I get in trouble way too much for my own good and I should be “more careful about who I trust.” Yeah, yeah.
R:            What’s the craziest thing you’ve ever done, post-vampire?
S:            Probably that I fell head over fangs in love with a master vampire with the exact opposite personality to mine. That’s pretty cray-cray. And I love it!
R:            In the first chapter of Blood Bath & Beyond, we find out that your parents have moved to a retirement community, George moved to Hawaii, and Amy and Barry to British Columbia.  Who will you miss the most and why?
S:          Well, Amy, of course. She’s my BFF and has been for longer than anyone else. Although, quite frankly, my world has been in a serious whirlwind mode since everyone recently scattered and Thierry got his new job, so I have barely had any time to process everything.
R:            You’ve moved from the paranormal romance category into the paranormal mystery category.  Are you looking forward to sinking your fangs into a good mystery?
S:        If I am minding my own business and I just happen to fall into a mystery, then what else can I do but try to solve it? So, absolutely, I’m pretty much ready for anything that’s coming next! Bring it on!
R:            The last time we saw you (Tall, Dark & Fangsome) Thierry FINALLY gave you that ring.  Do you predict a smooth or rocky road ahead for you two lovebats? Or will yet another woman from Thierry’s past come back to haunt you?
S:         Now, I’m not psychic, but if I can predict our future... I believe there’s a great deal from Thierry’s past that could POTENTIALLY cause issues for us. I mean, the dude’s over six hundred years old. That’s A LOT of history. Do I think that there will be troubles with love triangles and the like anymore? I highly doubt it. I mean, that’s so 2009.
R:            What do you have to say about this woman who chronicles your adventures, Michelle Rowen? Do you feel she’s portrayed you accurately? Would you change anything? 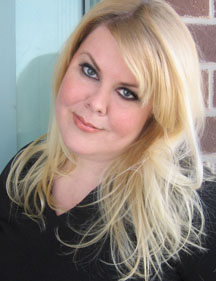 S:           Well, I am the one who bugged her incessantly to write more books about my adventures after she thought she was finally finished, so I guess it would be rude to complain. *clears throat* Still, things were pretty sweet at the end of the first series – and now things are taking a deep nosedive into dangerville again...
R:            What do you want to say to the legions of fans who are thrilled to have you back and can’t wait to sink their teeth into your newest adventures?
S:          Legions, huh? Well....... I’d say that I’m THRILLED to be back. For those who already know me – howdy once again! And for those who have yet to meet me – remember that Blood Bath & Beyond is BOOK ONE of a brand new series. Those other books? Just backstory about how me and Thierry met. You can start right here if you like, new friends, without any problems. Either way, I will try my very best to be as entertaining and charming as possible. Happy reading! Xoxo
R:       Thank you, Sarah, for a wonderful interview.  Best of luck to you and Thierry!

MEOW! Sarah's right, folks. You don't have to have read the previous Immortality Bites series to jump right in on this one - unless, of course, you want to.
Follow Sarah on Twitter at www.twitter.com/sarahdearly!
Find out more about the Immortality Bites Mystery series at www.michellerowen.com plus get a sneak peek at the first two chapters of Blood Bath & Beyond. Follow Michelle Rowen at www.twitter.com/michellerowen, and/or “Like” her on Facebook at www.facebook.com/michellerowenbooks.

People! Michelle will be giving away a copy of BLOOD BATH AND BEYOND to one lucky reader! Now, you know the drill. to enter, just leave a comment with your email address on this blog post. For extra entries, you can:
Friend the Human, Toni LoTempio, or me, Rocco the Blogging Cat, on Facebook
Friend Michelle on Facebook
Follow moi, Rocco, on Twitter (@RoccoBlogger) or follow Michelle on Twitter
Tweet or FB about this blog post/contest (gets you 3 extra entries)

Be sure to list all you've done in your post so we know how many entries to assign to  you. Winner will be chosen at random using random.org.  Contest is open to US/Canada residents ONLY. Contest ends midnight EST Sunday, August 12, winner announced Monday, August 13!

Rocco
Incredible Blogging Cat
Posted by ROCCO LOTEMPIO at 3:20 AM