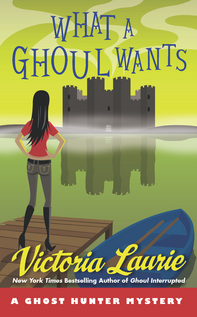 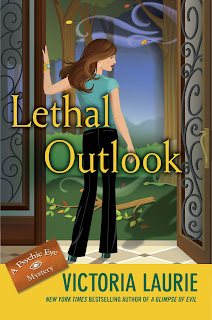 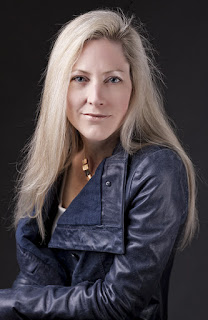 I've been a big fan of Victoria Laurie for quite awhile - started with the Abby Cooper "Psychic Eye" series and then graduated over to the "Ghost Hunter" series, so it's quite a thrill for me, in keeping with our "character interviews"  to interview Victoria Laurie's original psychic sleuth, Abby Cooper, today!

For those readers not familiar with the fabulously talented Victoria Laurie:

Victoria Laurie is the New York Times Bestselling author of over twenty books.  With two series in full swing, Victoria divides her time between The Psychic Eye Mysteries and The Ghost Hunter Mysteries.  As a professional psychic herself, Victoria knows all too well the tricky world of the paranormal in which her protagonists psychic Abby Cooper, and spiritual medium M. J. Holliday tackle murder, mayhem, and the occasional demon with plenty of plucky humor and determination.  You may find Victoria on the web at victorialaurie.com.

R) Can you share a bit about your newest adventure, LETHAL OUTLOOK?
A:  Sure!  LETHAL OUTLOOK was released last July in hardcover, and it'll be available in paperback in June.  It's the account of a case that Candice and I worked involving the mother of a toddler who simply vanished in the middle of the afternoon one day.  There's been no sign of her, but I believe she's been murdered.  Her husband is being looked at as the person responsible for her disappearance, but I'm not really convinced he's guilty.  There are quite a few suspects to look at, and Candice and I both believe that the truth about what really happened to this woman is a much bigger story than anyone actually believes.

Abby (and Victoria) will be giving away a copy of both WHAT A GHOUL WANTS and LETHAL OUTLOOK to one lucky reader! Just leave a comment with your email address to enter. Contest closes midnight, January 20, winner chosen at  random using random.org and announced January 21st.

What are you waiting for!

Next week: Mary Janice Davidson helps me celebrate my blogaversary! Stay tuned! Meow!
Posted by ROCCO LOTEMPIO at 6:57 AM