HAPPY BLOGAVERSARY ROCCO...MARYJANICE DAVIDSON GIVES US A SNEAK PEEK AT UNDEAD AND UNSURE 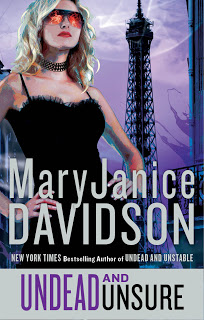 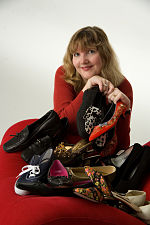 We all know one of my favorite authors is MaryJanice Davidson, and MaryJanice has been a friend of my blog ever since it began. When i think of celebrating, I naturally think of her.  and MJ's come through for us once again, readers, battling deadlines and the like to give us an EXCLUSIVE SNEAK PEEK at the first chapter of Queen Betsy's latest adventure, UNDEAD AND UNSURE, due out August 6!

this is the ONLY place on the web you'll get this exclusive peek, kitties, so...enjoy! It's included in Undead and Underwater, due out March 5! And thank you, MJ! It wouldn't be a blogaversary without you!

I didn’t want to kill her.
Why do they think that makes it better?
It wasn’t personal.
Or that?  That’s even worse than the first thing.  For most people, dead is dead.  There’s no coming back; this is not True Blood or classic, pre-rehab Stephen King.  There are a million zillion ways to die—I’ve done it myself half a dozen times—and for almost everyone, it’s forever.  So the fact that you snuffed someone’s light and it meant nothing?  It wasn’t personal, it was just business, their life was...I dunno...some kind of ledger sheet?
Worse than dead.  I know.  If you could go back in time to 1992 (it’s not as impossible as it sounds), leap in front of me as I was about to race through LAX on my way to Gucci (this was about an hour before the L.A. Riots swung into gear, and three years before poor Maurizio Gucci was murdered)...if you could do all that, catch me by the elbow while I was hailing a cab and lay my future on me, I’d have laughed so hard I would have toppled right off the curb.  Which at the least goes to show what a dumbass I was ten years ago.
Okay, and now, too.  These days, I just fuck up different things.

The devil’s dead, and the Anti-Christ is pissed.  That’s pretty much the whole thing right there.
Well...there’s one more thing:  I killed the devil.  And the Anti-Christ is my half-sister.  (Two more things.)  Because Christmas isn’t stressful enough, right?  Take it from me:  if you trick the devil into granting a wish and then kill her while the Anti-Christ screams at you to stop, family get-togethers thereafter are uncomfortable.
But I was up for the challenge!  Of course, the trick is making the family get-together happen at all.  Luckily I’d married rich (and dead).  And even if I hadn’t married rich (note I’m not saying married well), my best friend and gestating roomie, Jessica, was also rich.  It’s weird that I was dead and lived in St. Paul in a snowless winter with two zillionaires, right?  Never mind.
I used to be so heavily dependant on Hallmark.  They had a card for almost everything.  Even better, they had a funny card for almost everything.  But I couldn’t depend on a faceless corporate entity to convey my good wishes, condolences, birthday wishes, Mother’s Day howdies, and happy holidays in general, since there were some occasions the good people at Hallmark, Inc. didn’t figure anyone would need to cover.
And even after the make-your-own-card phase popped up, there were some cards that just couldn’t be made, no matter how much money got pissed away at Archiver’s.
Sidebar: this DIY crap has gotten out of hand.  Cards first, but followed by make your own beer, make your own cheese, and make your own eggs by raising chickens.  In the middle of a city, people are raising chickens!  If you don’t believe me, check a Williams-Sonoma catalog.  Honest to God.  It’s all right there:  make your own vinegar pot, $89.95.  The Reclaimed Rustic Coop with Painted Chicken, $399.95.  (I assume the chicken was painted on the side in case there was any doubt that the coop surrounded by chickens was a chicken coop.)  A Backyard Beehive and Starter Kit, $89.95, so you can start your own bees (“Gentlemen!  Start...your...bees!”).  Make your own butter kit: $29.95.  Who makes their own butter?  When did we all decide we were living in Little House on the Prairie reruns?
All this to say there wasn’t a card at Hallmark or a sticker at Archiver’s to convey, “Sorry I killed your mom, who was also Satan.  Also, Happy Thanksgiving.”  I didn’t even bother looking.  Instead, I turned to more sinister methods of getting my “again, so sorry I killed your mom!” message across.
Balloon bouquets.  A minstrel greeting (good to see the Renaissance Festival weirdos gainfully employed the rest of the year).  Cookie bouquets. Singing telegrams (yep, they still do those).
Comedy Central sowed the seeds of my sinister plan by running their John Hughes marathon.  Remember when the slutty nurse went to Ferris Bueller’s house to cheer him up even though he was at a Cubs game and she ended up singing to his crabby sister instead (played by Jennifer Gray, who went on to ruin her career with a nose job)?  John Hughes:  creative genius and comedy demigod.
That was why the Anti-Christ was in my driveway, panting and glaring and stomping up to the sidewalk in her awful Uggs (what year did the Seed of Satan think it was?) and shaking a fist full of balloons at me.  “Stop sending these.  They’re following me.”
Success!  Family reunion, take one.

Posted by ROCCO LOTEMPIO at 2:56 AM