LeAnn Sweeney in the Hotseat!

My guest today is national bestselling author Leann Sweeney, author of the Cats In Trouble Mysteries! 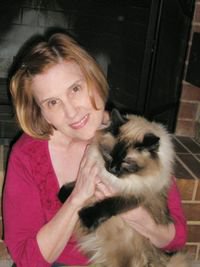 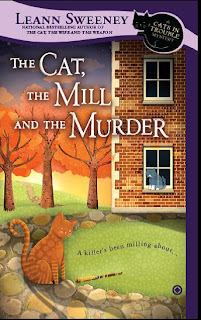 Leann Sweeney was born and raised in Niagara Falls and educated at St. Joseph's Hospital and Lemoyne College in Syracuse, NY. She also has a degree from the University of Houston in behavioral science and worked for many years in psychiatry and as a school nurse; she now writes full time.
She began crafting fiction in 1980, fulfilling her lifelong dream. After perfecting her skills with classes and a small fortune in writing books, she joined MWA and Sisters in Crime. Now she's the creator of two NAL/Obsidian mystery series: The Yellow Rose Mysteries and the Cats in Trouble Mysteries. The Cat, The Quilt and The Corpse, first in the Cats in Trouble Mysteries was the #1 bestseller on the Independent Mystery Bookseller's List when it debuted and made several top twenty lists for 2009 at bookstores across the country. Since then, The Cat, The Lady and The Liar and The Cat, The Wife and The Weapon climbed all the way to the NY Times bestseller list for mass market paperbacks.
Leann is married with two fabulous grown children, a wonderful son-in-law and a beautiful daughter-in-law--not to mention three amazing granddaughters: Maddison Grace (Maddie), Morgan Elizabeth and Meika Elise. She lived in Texas from 1974 to 2012 and now lives in South Carolina with husband Mike, her two cats Wexford and Marlowe, and Rosie--the smart, retrieving, golf-ball chasing, busy-busy-busy mini-labradoodle.

R:  Welcome to the blog, Leann! Tell us a bit about yourself and how you became interested in writing.

Thanks ROCCO! I worked as an RN for many years but wanted to be a writer for as long as I can remember. So, I finally began writing in 1980, or rather, I began LEARNING to write. I am still learning. I attended classes, entered writing contests, sold short stories to small markets and wrote my first novel. I would come home from my day job, take care of my family (2 children and husband!) then settle in to write, sometimes until 3AM. I also earned a second degree in psychology and this helps tremendously when creating characters.

R: Tell us about your upcoming release, THE CAT, THE MILL AND THE MURDER.

The Cat, The Mill and The Murder was inspired by a visit to an abandoned textile mill in South Carolina where the Cats in Trouble Mysteries are set. I immediately knew I had to craft a story around that place. I did more research for this book than for any novel I have written and learned so much about a part of American history that I had never been aware of before.  At the same time, my aging 3 real life fur friends, Indigo, Archie Goodwin and Agatha Christie were all coming to the end of their time with me. Their passing over the Rainbow Bridge has much to do with the love of cats, whether they are alive or gone—but that part is all between the lines. Thankfully, my readers understand how much of a cozy's story is between the lines.

R:  You write two cozy series. Where did the ideas for these come from?

The Yellow Rose Mysteries feature an adoption private investigator in Texas. The idea came from an article I read in the newspaper about illegal adoptions. A corrupt judge had known that many of the children whose adoptions she approved in her court were indeed forged through illegal methods and at times the children were actually stolen from their birth parents. Fascinating stuff and it made me think—"What if a woman found out she was illegally adopted? What would she do?" What happened is she became a private detective seeking to help other adoptees searching for their pasts.

The Cats in Trouble Mysteries came from a brainstorming session with my editor. I know about cats—I've been owned by kitties all my life—and I have been a quilter for many, many years. So, I built a series around a quilter who had 3 amazing cats. An amateur detective is curious by nature and so are cats. It seemed a perfect fit. My "what if?" question that started the first series was this: "What if your cat was allergic to human dander? And what if you came home to find your allergic cat sneezing and one of your other cats missing? What dandruff—bearing human had stolen that cat?" That is heroine and amateur sleuth Jillian Hart's very first mystery to solve—and she does it with the help of her feline friends in one way or another book after book.

R: Which of (your character)  adventures was the most fun for you to write? Were any of them the least amount of fun?

The cats are the most fun to write because they are always involved in the story in some unique way. It tests my brain to come up with creative ways for them to help Jillian solve the mystery. The victims are the least fun because I believe no one deserves to be murdered. It doesn't matter if they are a good person or a bad person. But as a writer, I need to make sure I make it clear why this person HAD to die. And that means I have to put myself in a killer's shoes. Sometimes it makes me squirm.

My path to publication was a little different than most people. To make this a short story, my first manuscript was tied up by one publisher who would not publish it, but wouldn't release it back to me. (I had a contract—too long a story for here.) My editor, who is still my editor now, wanted to publish the book through HER publishing house. I told her I couldn't get it back, so my editor got me an agent in one day, and the agent got the manuscript released back to me in an afternoon. It was a whirlwind and the call from my editor that she wanted that book was the most exciting day of my life.

I am an outliner, so I must have a synopsis. I also have to have researched things in the plot that I do not know anything about. These can be big things—like abandoned mills in the South—or small things like the names of tools used in textile production. And I like noise when I work in the early part of the book. TV noise or music. But when I get to the end and have to pull everything together, I need quiet to concentrate.

Perhaps they would be surprised to know that from the time I finished the first draft of my first book to the time it was published it took 11 years. Getting published is all about persistence and learning the craft.

Probably driven with just my two small children from Houston, Texas to Seattle Washington not once, but twice. That is a LONG drive and we stopped in L.A. on the second trip. The traffic was crazy and I was lost. My ten-year-old son got out the map and became the navigator. I learned just how smart he was that day! He got us to our destination without a hitch.

I hope they will take away that though thrillers, horror and suspense sell a lot of books, a cozy takes you on trip through small town America. Evil is everywhere and there are always those willing to fight for justice—even if they have cute cats and make quilts. Women are strong and smart. Cozies bring you strong protagonists and interesting characters—folks you might have met in the grocery store yesterday.
R: What are you working on at the moment / next?
I am working on the 6th book in the Cats in Trouble series.
R: Are you a plotter or a pantser?
As I said before, I have always been an outliner. Some of my outlines are as long as 20 pages. Some much shorter. But I always know the beginning and the end of the story before I type "Chapter One."
R: What other writing genre would you like to try that you haven’t yet? Historical, screenwriting, etc?

I have written two psychological suspense novels and one day I would like to rewrite them and get them published. Right now, I am very happy doing what I do.

I love Scandinavian crime novels and I just found a new author.  Her name is Camilla Lackberg. I haven't had a chance to start the book yet. It's called The Ice Princess.

giving away a readers choice: either a signed mass-market PB copy or a signed Advanced Review Copy of The Cat, The Mill and The Murder and hopes whoever wins will give an honest review of the book on Amazon.com or B&N.com!
To enter, leave a comment on this blog post with your name and email address (entries without email will be disqualified). For extra entries, you can do any or all of the below:

The winners of our Jody Wallace/Meankitty giveaways are:
1000 Kisses: Tonette
Cooley'sPanher:  Kristine Chaos!

Watch for an email form Jody to claim your prize!

Posted by ROCCO LOTEMPIO at 3:26 AM