Ellen Byerumm on my blog! 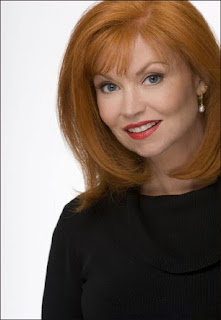 Ellen Byerrum is a mystery writer, a produced and published playwright, and former Washington, D.C., news reporter. Her Crime of Fashion mysteries star savvy sleuth Lacey Smithsonian, a reluctant fashion reporter in Washington D.C., "The City Fashion Forgot." Her most recent book, DEATH ON HEELS, came out in February. The ninth in the series, VEILED REVENGE will be published this coming February. Two of her books, KILLER HAIR and HOSTILE MAKEOVER, were filmed for television by the Lifetime Movie Network and first aired in June 2009. Ellen enjoys hands-on research for her books, including studying private investigation and receiving her Virginia PI registration, exploring the Smithsonian’s backstage costume collection, touring a dying velvet factory, and interviewing sources. Although Ellen worked in D.C. for a number of years, she returned to her hometown of Denver a year ago. She and her husband, Bob Williams, live in the Washington Park area. You can find out more about Ellen at her Web site at http://www.ellenbyerrum.com


R:  Tell us a bit about yourself and how you became interested in writing.


I am a mystery writer, a produced and published playwright, and former Washington, D.C., news reporter. My Crime of Fashion mysteries star savvy sleuth Lacey Smithsonian, a reluctant fashion reporter in Washington D.C., “The City Fashion Forgot.” Her most recent book, VEILED REVENGE was published this coming February.

R: Tell us about your latest Crime of Fashion release, Veiled Revenge.


Time marches on, even in fiction, and my Crime of Fashion characters change and grow. Their lives move forward as the seasons pass, albeit a little more slowly than real life. In Veiled Revenge, the ninth book in the series, just a year has passed since the first book, Killer Hair. But we've seen major life changes for Lacey Smithsonian and her BFFs, Stella Lake and Brooke Barton, as well as for Felicity Pickles, Marie Largesse and the rest of the cast: The complicated mysteries of life, love, fashion, murder—even wedding proposals. When your characters start proposing marriage to each other, things really get complicated. But everyone wants to go to a wedding. Especially a crazy wedding. Including the author!


And what creates more complications than a wedding? Weddings bring out the craziness in everyone, and this story got a little crazier too. I loved exploring how we invest our clothes with magical properties, and then I wondered: If clothes can be magical, can they also be haunted? Or even cursed? The murder of a rude party crasher at a bachelorette bash is something many bridesmaids have longed for. And when a stressed-out bride decides at the last minute she hates her boring wedding dress, maid of honor Lacey Smithsonian must solve yet another urgent Crime of Fashion.


In Veiled Revenge, Lacey discovers that being her friend Stella’s maid of honor is a killer of a job. But Stella and her fiancé Nigel might still make it all the way down the aisle—if murder, mayhem and a haunted Russian shawl don’t get them first.

R: You have a Private Investigator license. How did that come about and how helpful has it been with your writing?


Very helpful. During a period after I was laid off from a dreadful job, I took a PI course. I’d always thought it sounded fun. It was fun and informative, and I was inspired to write a couple of one-act plays available from Samuel French, Inc., as Gumshoe Rendezvous.  It also inspired book six in the Crime of Fashion Series, Armed and Glamorous.


R: How did the Crimes of Fashion character, Lacey Smithsonian, come about (cool name, btw!) and what is her “Extra-Fashionary Perception?”


Lacey came about after I’d been reading a ton of mysteries. They all featured strong female characters but everyone had a fear of dressing, as if it were some secret of universe. I wanted to see a character who could solve crimes, be tough and witty, and also dress herself.  In fact I turned that into her strength, ExtraFashionary Perception is her ability to decode characters through their clothes.


R: You’ve got playwright on your resume – what plays have you written? Would you like to see one on Broadway eventually?


I write plays under my pen name, Eliot Byerrum. A Christmas Cactus and Gumshoe Rendezvous are published by Samuel French, Inc. I also have about a dozen plays that have been produced, including Interviewing Techniques for the Self-Conscious. Of course every playwright dreams of Broadway, but it’s a combo of right place, right time, and knowing the right people. And having the right play.


My story is pretty run of the mill. I did a lot of research and compiled a list of agents, spent about a month perfecting my pitch letter, and found an agent. However, that was my first agent. I now have another agent.

R: What’s a must have for you when you are writing? What aids the creative process?
How about coffee?  I also am picky about my pens, and yes I write part of my manuscripts by hand. I find it is a completely different mind-paper connection. I used to take long walks by the Potomac River, they seemed to unlock ideas. Now, however, with no river, I have to escape to a coffee shop or library to write.


couldn’t possibly pick one. I’m interested in Napoleonic France, the American Revolution, Paris in the Twenties, New York in the Twenties, the women on the home front in the Forties who showed the world what they could do. And I have to admit, I’d love to see some famous designers in their element, like Worth, and Adrian, and even that scamp, Edith Head in Hollywood.


Actually, two of my books have been made into films on Lifetime Movie Network, Killer Hair and Hostile Makeover, starring Maggie Lawson and Victor Webster. I’d like to see Grave Apparel made into a movie, but I’d like to write the screenplay. It is a Christmas movie and I am particular about how Christmas is portrayed in the media.

R: What is one thing your readers would be most surprised to know about you?
Writing a book is always hard for me. It never gets any easier, sad to say. And I hate the movie A Summer Place.

R: What is the craziest thing you've ever done?
Couldn’t say.

R: What do you hope readers will most take away from your writing?
A great story and the desire to read all of the books in my series, and take a chance on my e-book on Amazon, The Children Didn’t See Anything.


Steak or salad?  Both, love the water.


Favorite Book?  Couldn’t possibly choose, but I love Act One by Moss Hart.


Favorite TV Series?  Maybe Justified even though I don’t have cable. Watched on DVD.


Favorite Actress: Katherine Hepburn, Barbara Stanwyk and I like Amy Adams, she has a quality you don’t see much--effervescence.


Hawaii or Alaska? Never been to Hawaii.


Finish this sentence:  If I could meet anyone in the world, past or present, it would be _Abraham Lincoln_


If I had just one wish, it would be more wishes


If I could trade places with anyone in the world, it would be __I wouldn’t want to get used to somebody else’s problems.____

Folks, here are all the places you can find Ellen:

Ellen will be giving away two copies of Veiled Revenge to two lucky posters!

Contest open to US residents only - ends midnight, July 14! 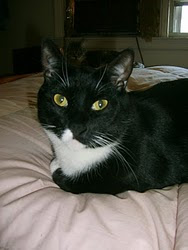 Posted by ROCCO LOTEMPIO at 3:47 AM