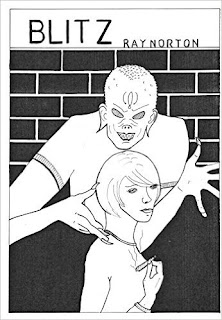 Like the cool cat that I am, I’m crazy for graphic novels: and if they have a Buffy-ish feel to’em,all the better! A talented friend and co-worker of the HUMAN’s, Ray Norton, has just published just such a graphic novel via Amazon, so I thought I’d sit him down for a little cat-to-human chat about being a graphic novelist!

Thanks ROCCO!  It’s a 3 part series about teens that get caught up with demons plotting to take over civilization. The creatures try to control the kids and the teen’s fight back vowing to destroy them and their ways. I got the idea mainly from the Buffy the vampire slayer comics. I like the idea of people sticking together and overcoming their challenges as a team. It’s really inspired me.
I started drawing about 6 years ago. I picked up a pencil one day and never put it down. I soon discovered the Kubert School for Comics, in Dover NJ which offers a Saturday morning introduction to drawing comics’ class. I signed up for the course and it’s been a passion ever since.
I have to say drawing comics has been the hardest thing I’ve ever done. Just getting the characters to look the same every time is a challenge. I’ve always written quick little horror stories so writing scary stuff tends to flow naturally. Be very afraid. I enjoy creating comics. Nothing gives me a greater sense of accomplishment than seeing a completed work. I actually drew Blitz, twice. The first time was just to see if I could and then I wanted work on the characters more so their looks were more consistent. I really like the way it came out.
Josh Whedon is my hero! No one has inspired me to the extent he has, especially his earlier work; Buffy the Vampire Slayer, Angel and Faith, Firefly. That’s the guy I want to be like, that’s what I want to do.
Right now I’m finishing up the 2nd book of the series. It takes a long time to get things just right. Sometimes I’ll do an entire page over and depending on the detail it could take days. I hoping to have the book completed by August. I do have a stack of stories on the shelf that I’m just waiting to start drawing the first chance I get.
I attempted a novel once, but it ended up short.  So I thought about a book of short stories, and then said hey! What about comic books! I did a reading once of a story about a guy that worked in a huge basement and all the creepy things that went on down there, it really creeped people out. I should revisit that one.
Spit into the wind. Actually I was hiking with a friend years ago. We were somewhere in the Poconos behind an old mill. We took a steep trail downhill. The journey down seemed endless and by the time we made to level ground we were ready to head back. There was no way we were going back the way we came so we headed back in the direction of the mill trucking through the growth of the forest. We came upon a stream and knew it would take us in the direction we needed to go. Soon the earth on either side of us jutted straight up, we had hiked into a canyon. It looked like we would have to turn back. Looking straight up on our right was the mill. In front of us was a waterfall. It would take us up directly where we wanted to go. We decided to climb the waterfall. The climb was steep with occasional moss covered rock. Crawling on the moss the running water would push us closer to the edge. With nothing to grip onto it seemed certain we would slide off and fall to the rocks below. We clawed our way up the cascading water to the top. We made it. Then I spit into the wind.

I’m a pastry chef by trade. I worked in New York city for years, standing for hours in hot steaming kitchens cooking for hundreds of people. I decided I needed a break and that’s when I found something I enjoyed even more, writing graphic novels.
I haven’t caught up to the 21st century yet, but a website is on my list of things to do, as well as learn Photoshop, how to tweet, and some hang gliding lessons.

Folks, you can check out BLITZ here:
BLITZ

Next week:
LAURA BRADFORD returns to the blog!

Posted by ROCCO LOTEMPIO at 6:22 AM