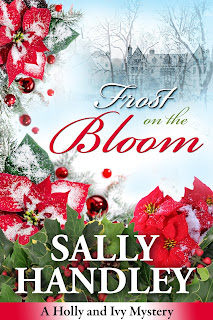 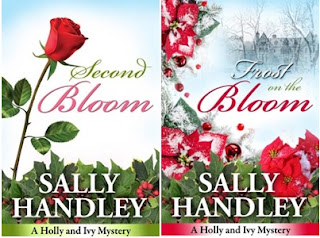 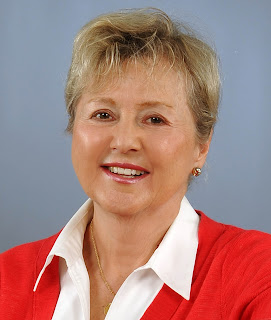 President of the Upstate South Carolina Chapter of Sisters in Crime (SinC), Sally Handley debuted her Holly and Ivy cozy mystery series with her first book, Second Bloom, in May of 2017. Frost on the Bloom followed in November of 2017. She also writes a blog entitled “On Writing, Reading and Retirement” (www.sallyhandley.com).
An avid reader, Sally has been a mystery lover since she read her first Nancy Drew and Trixie Belden books as a young girl. An English major, she graduated from Douglass College at Rutgers University and earned her Master’s Degree with a concentration in Shakespearean studies from Wroxton College, Oxfordshire, England.
After six years as a public school teacher, Sally transitioned into business, and had a 30 year career as a professional services marketer. She returned to teaching as an adjunct professor of English before retiring in 2015. Now a resident of Mauldin, SC, she devotes her time to writing cozy mysteries and gardening.

Hi! Would you tell us a little bit about yourself?
I’m an avid reader and have been a mystery lover since I read my first Nancy Drew and Trixie Belden books as a young girl. I also love to garden. I got the inspiration to try my hand at writing my own mystery back in 2010 when my sister and I were sitting in the garden at the Daniel Webster Inn on Cape Cod. We were admiring the flowers and I said something about Rosemary and Thyme, the PBS series that featured two women gardeners as amateur sleuths.  Suddenly I got the spark of an idea. Wouldn’t an American version be great…a series about two sisters who garden and solve mysteries? And that’s where it all began. Since that time, I’ve retired and I devote my time to gardening and writing cozy mysteries. I also write a blog entitled “On Writing, Reading and Retirement” at www.sallyhandley.com.
Do you have anything you would like to say to your readers?
I want to let my readers know how very much I love hearing from them. Whether they send me an email, write a review or send a brief comment to a blog I’ve written, I’m always delighted to read their reactions to my writing. Writers work alone and until they get feedback from readers, they can’t know if their writing has touched someone or brought them pleasure.  So, keep those comments coming.

Please tell us about your newest release

My most recent release came out in November of 2017.  Frost on the Bloom is the second book in the Holly and Ivy mystery series. One of Holly Donnelly’s former students, Becky Powell, asks the look-alike sisters for help when they all spend Christmas at Skyview Manor, and Becky becomes the prime suspect in the attempted murder of her manipulative grandmother, Lyla Powell. Once again the plucky sisters are reluctantly drawn into a murder investigation, convinced that Mrs. Powell’s duplicitous friends and greedy Powell family members have framed Becky for the crime. Holly’s involvement becomes a source of contention between her and Detective Nick Manelli, threatening their budding romance. The question is can their relationship continue to sizzle as the investigation heats up and the sister sleuths try to catch a cold-blooded killer?

Where can we purchase this book?
Frost on the Bloom and Second Bloom, the first book in the series, can be purchased by visiting my website, http://www.sallyhandley.com and clicking on the links there or by directly going to Amazon.com.

Fiction can often provide powerful life lessons. What message do you hope readers get from your book?

It is a story about middle-aged women Hence the title, Second Bloom.
My sleuths are two middle-aged sisters. At the start of the series, they are both at a stage in life when they are feeling vulnerable about the aging process. As a result of being drawn into a murder investigation, both sisters find inner strength and renewed purpose, experiencing a renaissance at an age when many choose to accept the limitations of aging. Holly and Ivy may not have superpowers, but they still have plenty to offer the world. Their unique life experience helps them to help others. I hope my readers are encouraged by that.

Is there an author or book that influenced you or your writing in any way growing up or as an adult?
Elizabeth Peters, author of the Amelia Peabody series, is probably my favorite mystery writer of all time, and while “I am not worthy” to even aspire to write like her, I do aspire to have strong women characters, who, in spite of their foibles and flaws, strive to do the right thing. And, of course, I especially love the romance between Amelia and her beloved Emerson in Peterson’s novels. I aspire to write romantic episodes between Holly and Nick Manelli that leave you feeling just a little tingly.

Are you reading anything interesting at the moment? If so, what is it?
I am reading A Front Page Affair, A Kitty Weeks Mystery, by Radha Vatsal.  I got my copy at last year’s Malice Domestic conference where I heard Ms. Vatsal speak on a panel of authors whose sleuths are newspaper reporters. Set in New York City in 1915, this delightful mystery involves Capability “Kitty” Weeks, an aspiring journalist, in the murder investigation of a man found dead at an upper crust social event that she is covering for the woman’s page. The spunky heroine, the engaging mystery and lots of historical tidbits make this book a real pleasure to read.

Which do you consider more important, plot or character?
From the moment I started to write my first cozy mystery, I realized that developing characters a reader cares about was more important than the plot. Let’s face it. A murder mystery plot follows a formula. Someone gets killed, an investigation ensues, and someone gets caught. In cozy mysteries, especially, you know, in the end, justice will be served and the killer will get what s/he deserves. Of course, the plotting of the mystery that keeps you guessing is important, but again, especially with a series, the reader has to want to spend time with the recurring characters. The reader has to care what happens to the characters and want to travel with them on their investigative journey.

What are you working on now and what are your future writing plans?
I am busy working on book three of the Holly and Ivy mystery series. In Full Bloom, the look-alike sisters are set out for a relaxing few days in the Catskills. Holly and Ivy have their plans thwarted when, once again, they become involved in a murder investigation. The day they arrive at the house of  Holly’s friend, Kate Farmer, they discover the body of Kate’s next-door neighbor , Chuck Dwyer, in a pool of blood on his kitchen floor. In a rush to judgement, the local sheriff sets his sights on 18-year old Tommy Cranston as the most likely suspect, but Kate insists Tommy is innocent. The sister sleuths set out to prove that a shifty, former neighbor and the victim’s widow have better motives for the murder. In the meantime, Ivy and Kate try to unravel another mystery -- the cause of Holly’s break up with detective Nick Manelli, who proposed to Holy at the end of Frost on the Bloom. I’m hoping to have the book ready to publish by November of this year.

Do you think you may ever go into another genre?  If so, which one?
If I could write in another genre, I would love to write a Young Adult/Science Fiction novel. Futuristic books where anything is possible always intrigue me. I admit I am very enamored of dystopian novels, like Hunger Games, Star Wars, and the Harry Potter books, in which young people face the ultimate battle of good versus evil, and have to re-define the world on their own terms.

What is a typical workday for you and how many hours a day (or week) do you devote to writing?
My goal every day is to get writing right after breakfast. If I can write for two hours, I’m happy…three hours, I’m ecstatic. That’s about my limit. Sometimes as I get to the end of the book and everything is worked out in my head, I can push myself a little further. The hardest part is sitting down and getting started. Some of the best advice I ever read was from John Grisham, an author I really love. He says to write 200 words every day. Now, you might think that’s not a lot, but at the end of a year, you will have a book.  Also, what I’ve discovered is that because 200 words doesn’t seem onerous, I don’t have as much trouble convincing myself to sit down and get cracking. Frequently, I get on a roll and easily exceed the 200 words. Best of all, on days when I don’t have two hours, I know I still can do at least 200 words.  By writing every day, I stay connected to the story and the characters. That’s what’s really important.

Thanks for a great interview, Sally!

Posted by ROCCO LOTEMPIO at 2:02 AM