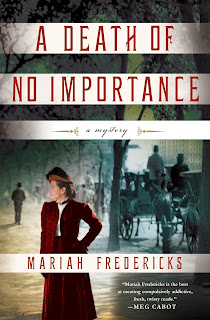 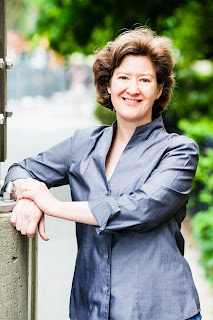 Meow! Today my guest is historical mystery author Mariah Fredericks!
Mariah Fredericks was born and raised in New York City, where she still lives today with her family. She is a graduate of Vassar College with a BA in history. She has written several novels for young adults; her novel Crunch Time was nominated for an Edgar in 2007. A Death of No Importance is her first mystery for adults.

Hi and welcome Mariah! Would you tell us a little bit about yourself?
Thanks ROCCO!  I was born in New York City on a date too far in the distant past to be mentioned and have lived here all my life. My parents met working for the New York Times, where my mother was a fact checker and my father was a photo editor. I graduated from Vassar College with a degree in history. I also studied Russia and can still pick out words on the subway. For better and worse, I’ve always made a living working with books. I worked in a bookstore right out of college, then as a copywriter for Book-of-the-Month Club. For many wonderful years, I wrote young adult novels, before switching to historical mysteries, which I will hopefully get to write for many years to come.

Do you have anything you would like to say to your readers?
First of all, thank you. One of the things I love about writing mysteries is you cannot forget the reader. Every piece of information you put on the page, you have to ask yourself how an intelligent person would interpret it. It’s a unique way to engage with readers. And I hope the book is a pleasure to read. Fun. I wrote the kind of book I enjoy reading, and I hope others do, too.

Please tell us about your newest release
A Death of No Importance first came to me several years ago with the line, “I will tell it.” I felt this was a woman, not wealthy or famous, who had a truth she needed to tell after having kept it a secret for many years. The story is about a murder that happened in New York in 1910. The world thinks it knows who committed the murder, but they’re wrong. And so it’s up to this young woman who was a lady’s maid for one of the wealthy families involved to set the record straight.

Please tell us about your main character
Jane Prescott is a lady’s maid in early 20s. She was brought to America from Scotland at the age of three. Her mother died on the journey over and her father left her on the docks with her uncle’s addressed pinned to her coat. Her uncle is a minister who runs a refuge for women who worked the streets, where they can be safe and train for other professions. She has one good friend, Anna Ardito, who is a labor organizer.

Jane is very intelligent, if irregularly educated, with the strong impulse to be kind and fight for the underdog. Doing things correctly is important to her, but she’s willing to bend rules if someone’s safety or happiness is at stake. She’s very loyal, possibly at this stage a little naïve. But she knows her own mind and is quite clear eyed. I love her.

Who is your favorite minor character and why?
The Benchleys—the family Jane works for—originally had a baby, who was a great source of comedy. He was into everything, greedy, messy, yet lovable, and he seemed to embody America in the Gilded Age. I had to cut him out because he didn’t really move the story along, no matter how entertaining he was.
Another small character I love is a woman Jane talks to while investigating the murder. She works at Wanamaker’s department store and she’s fallen on hard times. She’s harshly judgmental of women who have not faced their troubles as squarely as she has. But her innate kindness does show through.

Your character has the music blasting. What’s playing, and what is he/she doing while listening?
Caruso. If she could afford it, Jane would be a serious Caruso groupie. She also loves to dance, so ragtime would be on her playlist, if she had one. Songs like ‘That Scandalous Rag,’ ‘Everybody’s Doing It,” and ‘The Syncopated Boogie Boo.’

Please share a few favorite lines or one paragraph.
I really enjoy Jane’s back-and-forth with Michael Behan, the tabloid reporter who’s writing about the case not so much with an eye for the truth, but an eye for scandal. But I’ve always enjoyed this paragraph for what it reveals—and does not reveal—about the murder.
Now I must give my account of the events of Christmas Eve 1910. I am not the first person involved with the case to do so. Thomas J. Blackburn, the inspector in charge of the investigation, has written his memoir. The sister of the person convicted of the crime told her story. I believe one of the Newsomes’ footmen, a Daniel O’Reilly, makes a living taking groups by the house and regaling them with the “dark and bloody doings” of that night. I suspect he sensationalizes. For one thing, he claims it was he who found the body. Since I am the one who found it, I know that is not true

How long did it take you to write this book?
10 years. I was writing young adult novels for a long time, but this book would not go away. Only took me a year and a half to write the second one, though.

Of all the books out there, why should readers choose this one? (What makes your book stand out from the rest?)
Fair question. There’s a lot of well-written historical mystery out. But I think voice and point of view distinguish A Death of No Importance. It’s told first person by Jane herself, and I think she’s very good company. I also wanted to go beyond the fashion and grand house aspect of the time and really look at where America was as a country in the late Gilded Age. It was a time of vast inequality, dynamic change, high immigration, and societal conflict. How would that play out in the lives of ordinary people? There are a lot of parallels to our time and I think that makes it an intriguing read. Also, I have a lot planned for Jane and the chaotic Benchley family, so start following them now!

Is there an underlying theme in your book? If so, tell us about it and why/if it’s important to you.
Like a lot of people, I follow true crime. Whether it’s Leopold and Loeb or the O.J. trial, I’m fascinated by the narratives we construct around big public cases. And one thing I’ve noticed is we can, as a society, find reasons to be indifferent to the victim. We don’t necessarily dispute that the accused is guilty, but we decide other things matter more. Sometimes, it’s the character of the victim. That was the case in Jennifer Levin’s murder, the so-called Preppy Murder. America had two very different narratives for the O.J. trial. I would argue that we’ve been largely indifferent to gun violence, whether those affected are the children of Sandy Hook or Trayvon Martin. We care enough to post on social media, but not enough to change. Certain deaths are simply not that important to us, especially if the victim is poor or “other.” A Death of No Importance looks at how we decide who is a true “victim.”

Where can we purchase this book?
Any major bookseller or independent. If you can support a bricks and mortar store with your purchase, that would be wonderful.

Where do you see yourself at in five years—writing wise?
My fingers and toes are crossed that I’m still with Jane and the Benchleys. If I can’t do that, I’d love to explore other stories of Gilded Age New York or perhaps try a contemporary adult mystery.

Where can we learn more about you and your books?
Just go to mariahfredericksbooks.com. If the information there doesn’t tell you what you want to know, feel free to drop me a line!

Favorite kind of chocolate? Cadbury Fruit and Nut or a really good cake.
Cats or dogs? Dogs all the way. Basset hounds especially
Do you read more than you write? I write and read every day. Possibly, I write more hours than I read.
Favorite movie? Ugh, so hard. I do love historicals. I’ve watched Nicholas and Alexandra and The King’s Speech more times than I can count.
Favorite book to movie? Tinker, Tailor, Soldier, Spy.
How many paperback/hardcover books do you own? Thousands.
If you could live anywhere in the world it would be: New York. If I can cheat, I’d also like a flat in London. And the ability to teleport because I don’t like flying. That’s all possible, right?

Thanks for a great interview, Mariah!
Posted by ROCCO LOTEMPIO at 8:18 AM