Meow!  Here are my cozy reviews for April! 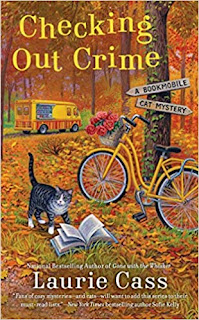 Librarian Minnie Hamilton and her clever cat Eddie solve a purr-fect murder, in the newest installment of the delightful Bookmobile Cat Mystery series.Minnie and her rescue cat Eddie can often be found out and about in their bookmobile near Chilson, Michigan, delivering great reads to grateful patrons all over the county. But they always brake for trouble, and when Minnie sees a car speeding away down the road, and soon comes upon a dead bicyclist, she assumes she just missed seeing a hit-and-run. Minnie is determined to discover who was behind the wheel, but it soon turns out that things are far more complicated than they seem and there's more to this case than meets the eye.  Luckily, this librarian is ready to read the killer his rights.

We always enjoy solving the crimes along with Minnie and Eddie the Bookmobile cat!  Laurie Cass does not disappoint with another excellent cozy!

A PAWS AND CLAWS MYSTERY 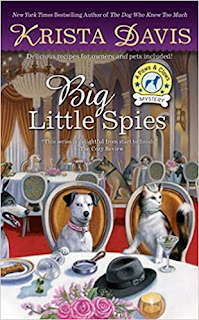 A pet detective on the hunt for a prominent pooch is found dead, and inn owner Holly Miller has to sort through her guest list for suspects in this all new Paws & Claws mystery in the New York Times bestselling series.

The ladies of the Wagtail Animal Guardians, WAG for short, are in town for a pet adoption charity ball, and Holly is making sure to roll out the red carpet for her special guests. She and her furry best friend Trixie are busy keeping the WAG ladies happy and preparing for the ball when they learn that a retired judge has lost his prized pup. The venerable citizen has hired a pet detective who has some personal ties to Holly’s new guests. His presence ruffles some feathers, and when the PI is found DOA not long before the ball, Holly wonders if one of the WAG ladies had a motive for murder. To make matters worse, some pet-loving guests of the ball nearly suffer the same deadly fate. Holly and Trixie will have to sniff out the clues and leash a callous killer before they strike again....
We are big fans of this series of Krista Davis's as well as her Diva series.  Holly and her furry friends have thier work cut out for them this time around!  Fans will enjoy sniffing out the clues along with Holly.....four and a half paws!
PHANTOMS AND FELONIES
A HAUNTED MANSION MYSTERY
LUCY NESS
BERLKEY MMPB APRIL 6, 2021
FOUR PAWS 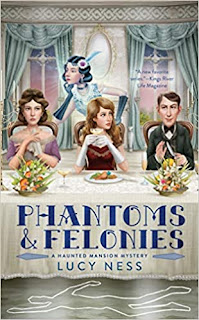 Avery Morgan has been hired to breathe new life into the Portage Path Women's Club, but first she'll have to deal with a dead body and a meddling ghost.When a local theater troupe puts on a new play at the club, manager Avery Morgan is excited. This is just the sort of event that's destined to bring in potential new members. Okay, millionaire banker Bob Hanover has more bucks than talent and has used his position to grab the lead role, but that seems like a small price to pay...until Bob is found dead backstage.Bob rubbed many people the wrong way, but would anyone want him dead? The short answer to that is: Who wouldn't want him dead? His long-suffereing wife had to put up with years of womanizing. The show's playwright has been tricked out of his one great idea by Bob, who claimed it as his own work. And Bob bankrupted one of the town's small businessmen. The choices are many and the time to find the killer is running short.Avery is working overtime to keep the club open and find the killer. Fortunately, she has help with the latter task. Clemmie Bow was once a singer in the speakeasy in the club's basement. Now she's a ghost who's also a top-notch detective. Together Clemmie and Avery will find the killer—even if it kills one of them.
I'm a big fan whenever supernatural and mysteries are combined.  If that's your cup of tea, then you will definitely enjoy this offering!  4 paws!
WHAT THE DEVIL KNOWS
A SEBASTIAN ST CYR MYSTERY
BERKLEY TRADE PAPERBACK 4/6/2021
CS  HARRIS
FOUR PAWS 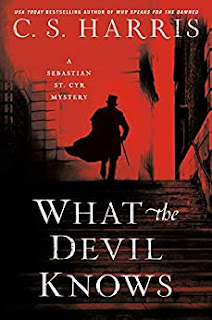 Sebastian St. Cyr thought a notorious killer had been brought to justice until a shocking series of gruesome new murders stuns the city in this thrilling historical mystery from the USA Today bestselling author of Who Speaks for the Damned.It's October 1814. The war with France is finally over and Europe's diplomats are convening in Vienna for a conference that will put their world back together. With peace finally at hand, London suddenly finds itself in the grip of a series of heinous murders eerily similar to the Ratcliffe Highway murders of three years before. In 1811, two entire families were viciously murdered in their homes. A suspect--a young seaman named John Williams--was arrested. But before he could be brought to trial, Williams hanged himself in his cell. The murders ceased, and London slowly began to breathe easier. But when the lead investigator, Sir Edwin Pym, is killed in the same brutal way three years later and others possibly connected to the original case meet violent ends, the city is paralyzed with terror once more.
A good thriller for a Saturday afternoon!  Four paws!
MURDER ON WALL STREET
VICTORIA THOMPSON
GASLIGHT MYSTERY
BERKLEY HARDCOVER 4/27/21
FOUR PAWS 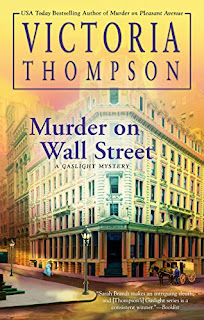 Midwife Sarah Brandt Malloy and her detective husband, Frank, must discover who killed a prominent—but despised—society banker before an innocent family is destroyed in Murder on Wall Street, an all-new Gaslight Mystery in the USA Today bestselling series.Reformed gangster Jack Robinson is working hard to bolster his image in Gilded Age New York City society as he prepares to become a new father. But when Hayden Norcross, the man who nearly ruined his wife, is shot in cold blood, Jack knows the police will soon come knocking on his door. Frank Malloy has to agree—things don’t look good for Jack. But surely a man as unlikeable as Hayden had more than a few enemies. And it’s soon clear that plenty of the upper echelon as well as the denizens of the most squalid areas of the city seem to have hated him.Sarah and Frank have their work cut out for them. As the daughter of the elite Decker family, Sarah has access to the social circles Hayden frequented, and the more she learns about his horrific treatment of women, the more disturbed she becomes. And as Frank investigates, he finds that Hayden had a host of unsavory habits that may have hastened his demise. But who finally killed him? Sarah and Frank must put the pieces together quickly before time runs out and Jack’s hard-won new life and family are ripped apart.
This series always delivers!  Four paws
Want to win one of ROCCO's review copies? Leave your name and email address in our comments section.  One winner will be chosen at random.  US entries only, please.  Contest ends midnight, April 15th.
Posted by ROCCO LOTEMPIO at 12:30 AM