Meow.....what the world needs now are not depressing movies and tv shows, but fun couples who dabble in detection!  Similar to the human's beloved Nick and Nora (albeit Nick's a feline, but...when you got it, you got it!)  Below are my choices for five couples who fill the bill not only as superior sleuths, but fun couples! 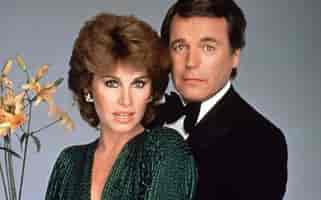 Who could forget the 80's series introduced by the couples majordomo, Max:

This is my boss – Jonathan Hart, a self-made millionaire. He's quite a guy.

This is Mrs. H – she's gorgeous. She's one lady who knows how to take care of herself.By the way, my name is Max. I take care of both of them – which ain’t easy; ‘cause when they met, it was murder.

Jonathan Hart (Robert Wagner) is the CEO of Hart Industries, a global conglomerate based in Los Angeles. His wife Jennifer (Stefanie Powers) is a freelance journalist. Living the jetset lifestyle, the Harts often find themselves involved in cases of smuggling, theft, corporate and international espionage and, most commonly, murder. At their opulent Bel Air estate, they are assisted by Max (Lionel Stander), their shared mansion's loyal, gravel-voiced majordomo, who also helps with their cases. The Harts's beloved pet dog is a Löwchen called Freeway, so named because he was a stray that they found wandering on the freeway.  They're all so darn charming, we'll forgive them for not having a cat.

THE SCARECROW AND MRS. KING 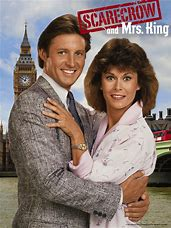 Kate Jackson and Bruce Boxleitner delighted us for four seasons with the adventures of Amanda King, a housewife who finds herself embroiled in espionage after Agent Lee Stetson accidentally gives her a package meant for another spy.  For me, this series ended way too soon, although many believe having the couple marry in Season Four caused the show to "jump the shark", citing that the romantic tenstion between the two main characters fizzled.

The series revolved around cases investigated by the Blue Moon Detective Agency and its two partners, Madelyn "Maddie" Hayes (Shepherd) and David Addison Jr. (Willis). The show, with a mix of mystery, sharp dialogue, and sexual tension between its leads, introduced Willis to the world and brought Shepherd back into the spotlight after a nearly decade-long absence. The characters were introduced in a two-hour pilot episode.

The show's storyline begins with the reversal of fortune of Maddie Hayes, a former model who finds herself bankrupt after her accountant embezzles all her liquid assets. She is left saddled with several failing businesses formerly maintained as tax writeoffs, one of which is the City of Angels Detective Agency, helmed by the carefree David Addison. Between the pilot and the first one-hour episode, David persuades Maddie to keep the business and run it as a partnership. The agency is renamed Blue Moon Investigations because Maddie was most famous for being the spokesmodel for the Blue Moon Shampoo Company. In many episodes, she was recognized as "the Blue Moon shampoo girl," if not by name. 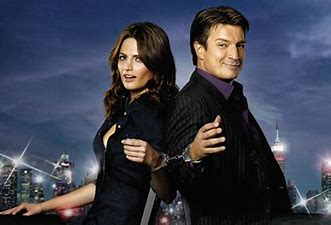 He's a poplular thriller writer who's full of himself. She's a hard-boiled NYC cop  who's not.  It was a marriage made in heaven right from the get-go, even if neither one of them realized it at first.

Castle, bored and suffering from writer's block, he kills off Derrick Storm, the main character in his successful book series. He is brought in by the New York Police Department for questioning regarding a copycat murder based on one of his novels, where he meets and becomes intrigued by Kate Beckett (Katic), the detective assigned to the case. Castle is inspired to take Beckett as his muse for Nikki Heat, the main character of his next book series and uses his friendship with the mayor to force the police to let him shadow Beckett. Castle's exuberant man child personality clashes with Beckett's more reserved and professional demeanor. However, as Beckett begins to appreciate Castle's assistance in helping her catch killers, the two eventually become friends and then lovers. The cases often dealt with murders occurring within various unusual subcultures or milieus, including reality TV shows, vampire enthusiasts, a science fiction convention, and a man who claims to be a time traveler. A recurring plot line deals with the unsolved murder of Beckett's mother years before.

AND OF COURSE, TOP CHOICE NUMBER ONE: 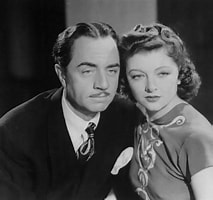 We all know theres no sleuthing couple than the original Nick and Nora Charles.  Tough PI marries madcap heiress and they end up solving mysteries with the aid of their trusty terrier, Asta.  there were two tv series based on the book, but none compared to the original movies starring William Powell and Myrna Loy!  No one can deliver a one-liner like these two!!!!!!