Jeff Chapman explores fantasy worlds through fiction and is the author of The Merliss Tales fantasy series, The Huckster Tales weird western series, and The Comic Cat Tales series. Trained in history and computer science, Jeff writes software by day and explores the fantastic when he should be sleeping. His fiction ranges from fairy tales to fantasy to ghost stories. His short stories have appeared in various anthologies and magazines. He's not ashamed to say he's addicted to dark hot chocolate and he loves cats. Jeff lives with his wife, children, and cats in a house with more books than bookshelf space.
URL TO MY WEBSITE PAGE ON THE MERLISS TALES:
http://www.jeffchapmanbooks.com/merliss-tales/
The Merliss Tales are a series of fantasy stories and novels that follow the adventures of a human spirit banished to the body of a cat. The magic that put her spirit in the cat has given Merliss an unusually long life. The series tells dark fantasy stories from a cat’s eye view. The protagonist may have been a girl once, but after centuries inside a cat’s mind and body, she’s almost as much cat as human. It’s a struggle for Merliss to hold on to her humanity. At the best of times, cat and human work together.
The idea for Merliss, who first appeared in my short story “The Water Wight,” came from a real cat.
In the fall of 2015, I pulled into my driveway to find a small gray cat sitting in front of the garage. I had seen this cat before but never had a good look at it. I had usually glimpsed it at night or twilight and a gray cat in the dark appears to be little more than a shadow. I had assumed it belonged to someone in the neighborhood. I was so wrong. It was starving. I could see every bone in its ribs. Pus was visible beneath one eye. The cat meowed at me. My wife came out the breezeway door at that moment. The cat trotted toward her and tried to enter our house.
We gave the cat some food and water. It ate like it had never seen food before. My daughters surrounded the cat so it wouldn’t run away, but I believe at this point the cat had decided it was going to live with us. We coaxed it into a carrier and took it to an emergency vet. The cat, which we named Smokey, was not sick with any life-threatening disease. She was dehydrated, malnourished (only 5.5 pounds), suffering from an upper respiratory infection and an eye infection, and had a million fleas.
Several hours and several hundred dollars later, we returned home with two antibiotics and a sick cat. We quarantined her in the breezeway. Our other cats spent a lot of time sniffing at the back door.
Smokey responded well to the medicines and our TLC. She gained weight and proved to be incredibly well-tempered. She wasn’t the cutest kitty on the block but certainly the sweetest. We soon discovered that she was deaf and missing an upper and lower canine. We had no idea of her age but Smokey appeared to have been up and down the alley a few times. When her quarantine period ended, Smokey moved into the house.
We speculated a lot about Smokey’s past. What stories would she tell if she could talk? The speculation got me thinking about characters based on an old cat. Somehow, I made the leap of pairing a human spirit with a cat’s body. In the fantasy world I was developing, this pairing would grant the animal’s body unusually long life. Merliss was born. 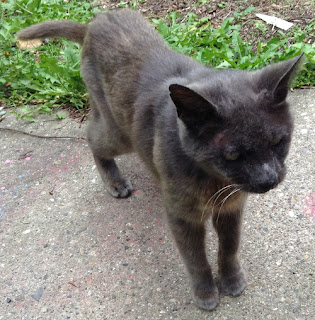 Unfortunately, Smokey passed away in April 2018. Her health had been declining for several months and then x-rays revealed painful bone tumors in her sternum. Taking her to that final vet appointment and staying with her until the end is one of the roughest tasks I’ve experienced. I still miss her every morning when she’s not waiting in the kitchen demanding breakfast.
Smokey’s memory lives on in the character of Merliss. The cat silhouettes in the map and at the beginning of each chapter were made from pictures of Smokey.
At this time the series includes two novels--The Great Contagion and Cat Sidhe--and a short story, “The Water Wight.” More novels and stories are in the works.
If you want to sample The Merliss Tales, you can download “The Water Wight” for free from StoryOrigin at https://storyoriginapp.com/giveaways/3cddcb88-c607-11ea-8a9a-878925005b51.
Posted by ROCCO LOTEMPIO at 12:30 AM