ROCCO reviews "Peaches and Schemes" (and Anna Gerard does our Fast Five!)

meow!  Today I have the pleasure of reviewing Anna Gerard's third instalment in her Georgia B&B Series, PEACHES AND SCHEMES! 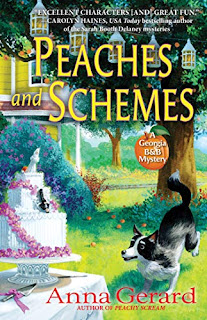 In Anna Gerard's third delightful Georgia B&B mystery, Nina Fleet learns that despite the satin, lace, and buttercream trappings, weddings often prove to be anything but sweet...

Nina Fleet might be new to the innkeeping business, but she's savvy enough to know that Cymbeline's tourists aren't enough to keep her fledgling bed and breakfast going. And so, Nina decides to tap into the destination wedding market by taking a booth at the Veils and Vanities Bridal Expo. The twice-yearly event is sponsored by the town's two wedding pros: Virgie Hamilton, the sixtysomething owner of Virgie's Formals, and Roxanna Quarry, a Gen X event planner and Nina's new friend. But everything goes wrong during the expo's fashion show, when Roxanna comes tumbling out of an oversized prop wedding cake, strangled to death by her own scarf.Virgie is arrested for the crime, thanks to Nina's statement to the police about having overheard the woman accusing her partner of embezzlement. Meanwhile, the situation grows tense with her sometimes nemesis and current tenant, the dashing out-of-work actor Harry Westcott. Harry is concentrating on plugging his most recent side hustle ...but he's not too busy to break the news to Nina that her ex-husband is engaged to be married again.Certain that Virgie's only offense is a bad temper, Nina decides to do her own investigating. First, however, she and Harry retrieve Roxanna's now ownerless dog, planning to foster him until a new home can be found. But local gossip soon convinces Nina that others beside Virgie might have had reason to murder Roxanna. As Nina gets close to the truth, she's putting her own life at danger. And when Virgie vanishes after being bailed out of jail by an unknown benefactor, Nina fears that if she can't find the dress shop owner in time, tying the knot will take on a whole new meaning for them both.

So what is there  not to like about this series?  I've been a fan of the author's other series (Black Cat Bookshop, written as Ali Brandon) and thoroughly enjoy this one.  I do enjoy the interaction between Nina and Harry (what a rogue!) and I do hope the series continues so there might possibly be a chance of a romance between these two!!!!!!!!!!  an excellent series!  If you haven't tried it yet, highly recommend.  Five paws up! (and both ROCCO and Maxx approved!)

·        Cats and Dogs are featured prominently in your books.  Are any of them modeled after your own pets?

Of course! Brandon Bobtail and Ophelia in my Tarot Cats Mysteries are based on my own kitties, Brandon and Ophelia. Like their characters, they are sibling black cats although real life Brandon—who also has half a tail—is far snarkier than his literary namesake. As for Mattie the Aussie in my Georgia B&B Mystery series, she is based on a combination of two dearly departed Aussie pups of mine…Oliver and Matilda. Mattie was the smartest dog I’ve ever known, but not the friendliest to outsiders. Oliver was a big fluff head who was everyone’s friend. Together they make the ideal dog, who is my amateur sleuth Nina Fleet’s Mattie.

·        What was your favorite childhood book or series?

I started out young with mysteries as I cut my reading “teeth” on the Bobbsey Twins. From there, any book with magic (particularly all the Edgar Eager and Zilpha Keatley Snyder books) were always on my library checkout list.

Relax? What’s that? If I’m lucky after the day job and all the home chores and (hopefully) a bit of writing. I usually veg out in bed watching old sitcoms.

“They’re coming to get you, Barbara!”

Diet Coke (and ice cream in the freezer!).

Folks you can find out all about new releases at the author's website:

ROCCO and I will giveaway a signed copy of the MMPB of  PURR M FOR MURDER to the first person who correctly identifies Diane's movie quote!   Put your guesses in our comments section below!  ends midnight, May 15.