Meow!  It's time for my May Cozy Reviews: 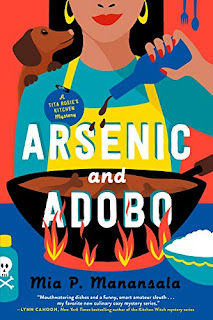 The first book in a new culinary cozy series full of sharp humor and delectable dishes—one that might just be killer....When Lila Macapagal moves back home to recover from a horrible breakup, her life seems to be following all the typical rom-com tropes. She's tasked with saving her Tita Rosie's failing restaurant, and she has to deal with a group of matchmaking aunties who shower her with love and judgment. But when a notoriously nasty food critic (who happens to be her ex-boyfriend) drops dead moments after a confrontation with Lila, her life quickly swerves from a Nora Ephron romp to an Agatha Christie case.With the cops treating her like she's the one and only suspect, and the shady landlord looking to finally kick the Macapagal family out and resell the storefront, Lila's left with no choice but to conduct her own investigation. Armed with the nosy auntie network, her barista best bud, and her trusted Dachshund, Longanisa, Lila takes on this tasty, twisted case and soon finds her own neck on the chopping block…

a good first entry in what appears to be a promising series!

FOR BATTER OR WORSE 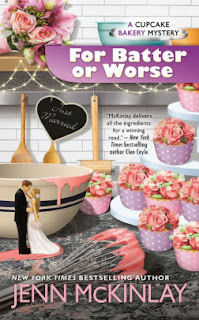 Life is sweet and business is booming at the Fairy Tale Cupcakes bakery—and the fact that Mel and Joe are getting married is the icing on the cake. Their reception will be held at the swanky resort where Oz works as the pastry chef. The wedding planning is all fun-fetti and games until Mel and Joe meet the head chef at the resort who has been making Oz's life miserable. When the eccentric chef insults Mel's bakery, Oz gets into a blowout argument with the culinary prima donna. Things turn extra sour when the chef is murdered, and Oz is the police's main suspect. As the countdown to the wedding day begins, Mel, Joe, and the rest of the Fairy Tale Cupcake crew must sift through clues to catch the real killer and clear Oz's name before their wedding plans are totally battered and baked.

This is the thirteenth entry in this popular series, which shows no evidence of running out of steam!  A four and a half paw tail!!!!!!

GHOST AND THE HAUNTED PORTRAIT Bookshop owner Penelope Thornton-McClure and her gumshoe ghost team up to solve the stunning mystery at the heart of a madwoman’s self-portrait in this all new installment from New York Times bestselling author Cleo Coyle. While gathering a collection of vintage book cover paintings for a special event in her quaint Rhode Island bookshop, Penelope discovers a spooky portrait of a beautiful woman, one who supposedly went mad, according to town gossip. Seymour, the local mailman, falls in love with the haunting image and buys the picture, refusing to part with it, even as fatal accidents befall those around it. Is the canvas cursed? Or is something more sinister at work? For answers, Pen turns to an otherworldly source: Jack Shepard, PI. Back in the 1940s, Jack cracked a case of a killer cover artist, and (to Pen’s relief) his spirit is willing to help her solve this mystery, even if he and his license did expire decades ago.

We are big fans of Cleo's Coffee house mysteries, and this series is quickly becoming another favorite!  We are also big paranormal fans, so anything combining cozy and paranormal is #1 with  us!  4 1/2 paws. 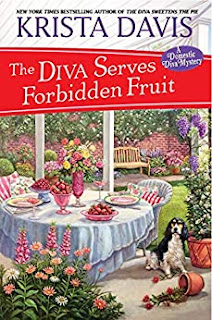 he latest Domestic Diva mystery from New York Times bestselling author, Krista Davis, entertaining maven Sophie Winston must cut to the core of another murder investigation when members of an international tour group begin dropping like flies all over Old Town, Virginia . . . With Old Town’s DIY Home Decorating Festival in full swing, Sophie’s swamped, juggling a bumper crop of artisans, antique dealers, and decorators for the busy street fair. Still, when her best friend Nina suddenly needs a ride from the airport, Sophie is happy to help . . . until she sees Nina disembarking in a state of disarray. It’s obvious the trip to Portugal soured somewhere along the way. But after one of Nina’s traveling companions turns up murdered the following day, Sophie knows something is truly rotten . . . Though the crime scene is staged to look like an accident, Sophie isn’t fooled and peels off to conduct her own investigation. Her only clue is a strange image the victim scratched into the soil before dying. Could it point to a cryptic killer in Old Town? A bitter travel adversary? Or a cursed artifact smuggled back from the trip? As the mystery grows, so does the body count, and if Sophie doesn’t pluck the murderer soon, her best friend may be the next to fall . . .